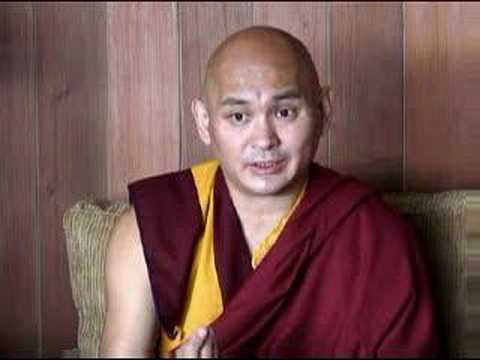 Top image caption: His Holiness the 14th Dalai Lama’s emissary, Tenzin Dhonden, has been suspended after claims of corruption and extorting money from sponsors. In fact there are many such people surrounding the Dalai Lama and this is the very reason that there is division and disharmony within the Tibetan leadership.

A few days ago, on 27 October 2017, The Guardian, a British daily newspaper, published news of the suspension of His Holiness the 14th Dalai Lama’s personal emissary over corruption claims. Tenzin Dhonden, the news reported, was accused of having essentially extorted money from generous sponsors for the Dalai Lama to grace events and for certain privileged few to meet and have audience with the Tibetan leader.

While this may be the first time a prominent newspaper printed disclosures of such misdealings by personnel linked to the Tibetan spiritual leader, it is in fact nothing new, especially when it comes to Tenzin Dhonden. Accusations of fraud, cheating, embezzlement, misappropriation of funds and a litany of crimes have become synonymous with the 14th Dalai Lama and his government, the Central Tibetan Administration (CTA; the Tibetan leadership based in Dharamsala). This has been around ever since the Tibetan cause became cause célèbre of the people of the liberal democratic West. Corruption Is Common Amongst Tibetan Officials 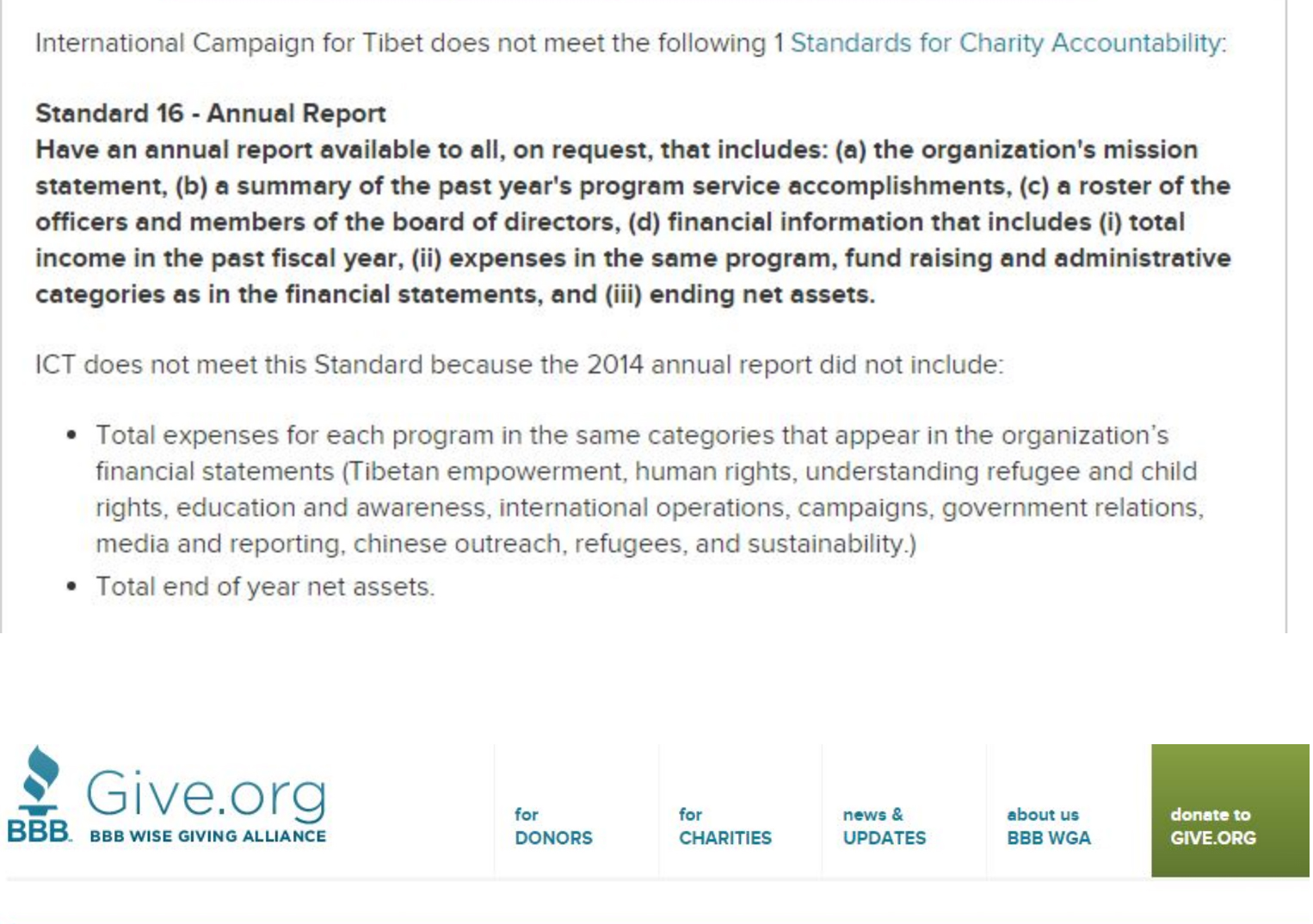 ICT failed to meet the financial transparency test. It is common for CTA-related entities and associated bodies to be vague about where its spends the money that it receives from donors and sponsors. They are rarely held accountable by supporters of the Tibetan cause, and never by the Tibetans themselves.

Therefore, the Dhonden story itself does not offer much original content, and in that, The Guardian missed the scoop. Tenzin Dhonden is nothing more than another cog in the CTA’s wheel, that has been spinning unfettered, preying on the kindness of the world and taking every Tibetan sympathizer on a merciless ride. The story is about when exactly the Dalai Lama’s inner circle stopped being leaders of perhaps an erstwhile cause, and began operating like unscrupulous robber barons, dangling the Tibetan refugees as bait for the world to keep giving; and how widespread the scam is.

Show Me the Money

Indeed, has anyone paused to ask exactly how much has been collected by the CTA in over the 50 years they have been soliciting funds, and attempt to see if the sum is somehow reflected in better lives for the average Tibetan refugee? We need to ask how much of the money given by governments, corporations, families and individuals to the Tibetans actually reached the poor Tibetan people after having survived the gauntlet of grabby hands of Dalai Lama insiders and CTA surrogates. 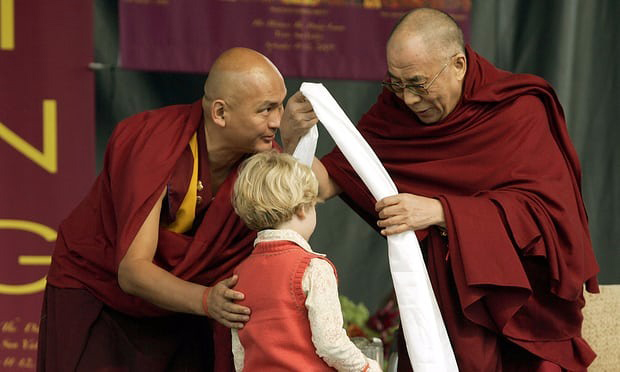 Dr. Stephanie Röemer was one academic who attempted to make sense of the numbers. She spent years living in Dharamsala, investigating, observing and speaking to various officials and concluded in her book, The Tibetan Government in Exile, that not only has billions been received by the CTA since the early 1960s but also that the bulk of it was apparently spent on very general and vague items such “politically related affairs”. Where has all this money gone?

That the Tibetan leadership and its proxies around that world are dishonest is self-evident. In the IRS forms Tenzin Dhonden declared that the total revenue received by “Friends of the Dalai Lama Foundation” was no more than $50,000 for the years 2014, 2015, and 2016. In truth, we can see that one benefactor alone, in the form of philanthropist Daniel Kranzler, gave $250,000 just in one year. Not only has the Dalai Lama’s emissary committed a federal offense by falsely declaring the income of the organization, but we see that there is no hesitation whatsoever in a person chosen by the Dalai Lama to be in his inner circle, to mislead the government as well as private individuals sympathetic to the Tibetan cause. 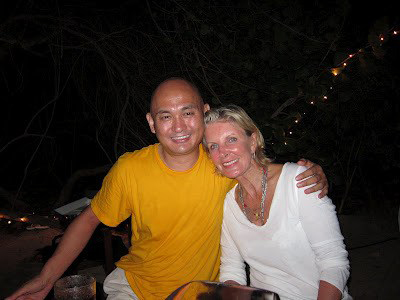 Tenzin Dhonden is accused of corruption and extorting money from generous sponsors. In the IRS forms Tenzin Dhonden declared that the total revenue received by “Friends of the Dalai Lama Foundation” was no more than $50,000 for the years 2014, 2015, and 2016. In truth, we see that one benefactor alone, in the form of philanthropist Daniel Kranzler, gave $250,000 just in one year. So where did the money go? 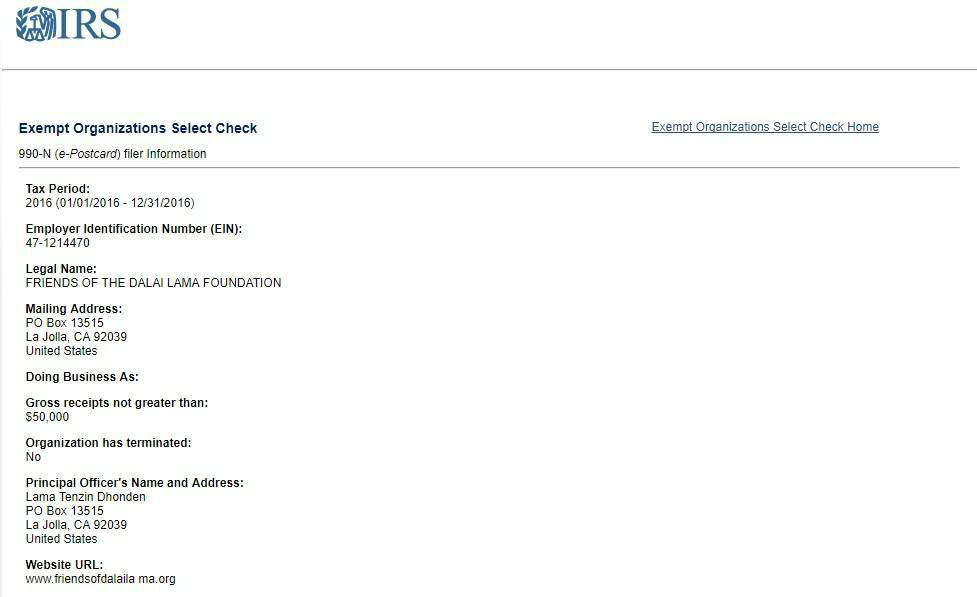 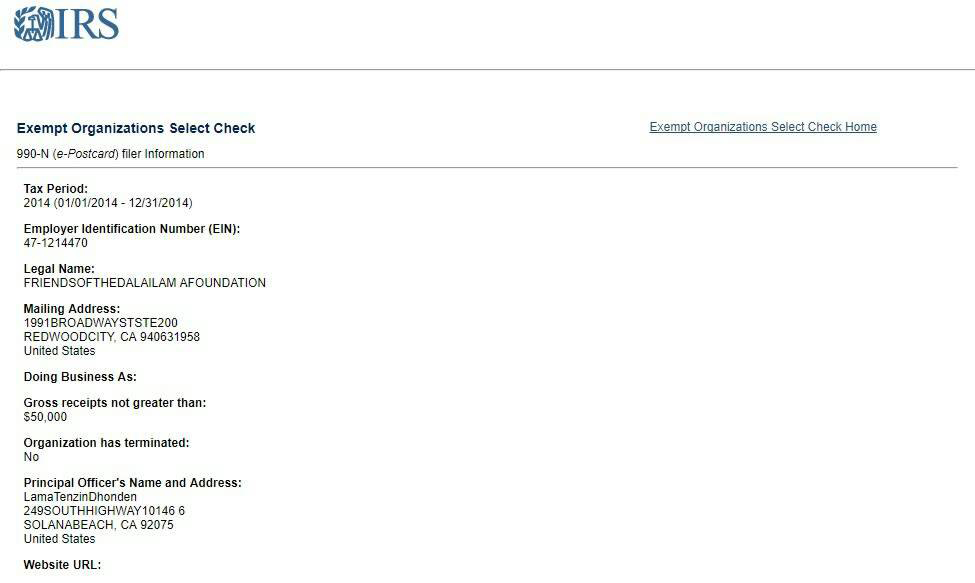 Conflict As A Trade 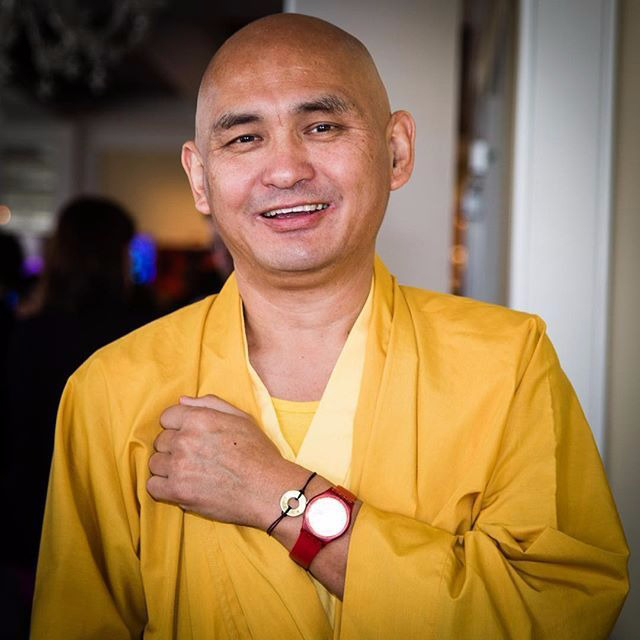 The Dalai Lama is surrounded by sycophants who use their position for their own selfish ends, rather than working for the welfare of the Tibetan people.

As we now begin to assemble the fragments of known complaints against the countless Tibetan NGOs set up by the Tibetan leadership, an ugly picture emerges. The picture is not that of a displaced nation of refugees being upheld by the courageous government of ‘a simple Buddhist monk’ but that of a callous and greedy corporation masquerading as an government in-exile plying Tibetan miseries into a lucrative trade. As long as the Tibetan refugees remain displaced and pitiable, and as long as the world public buys into the Tibetan leadership’s narrative, the money will keep rolling in unchecked, unaudited and unaccounted for.

Surely, this must be the best political gig in the entire world:

Surely this must be the most powerful, effective and untouchable corporation in the world. The ‘Tibetan cause’ then becomes not in fact an objective but a method employed by a small handful of people in authority to line their own pockets. 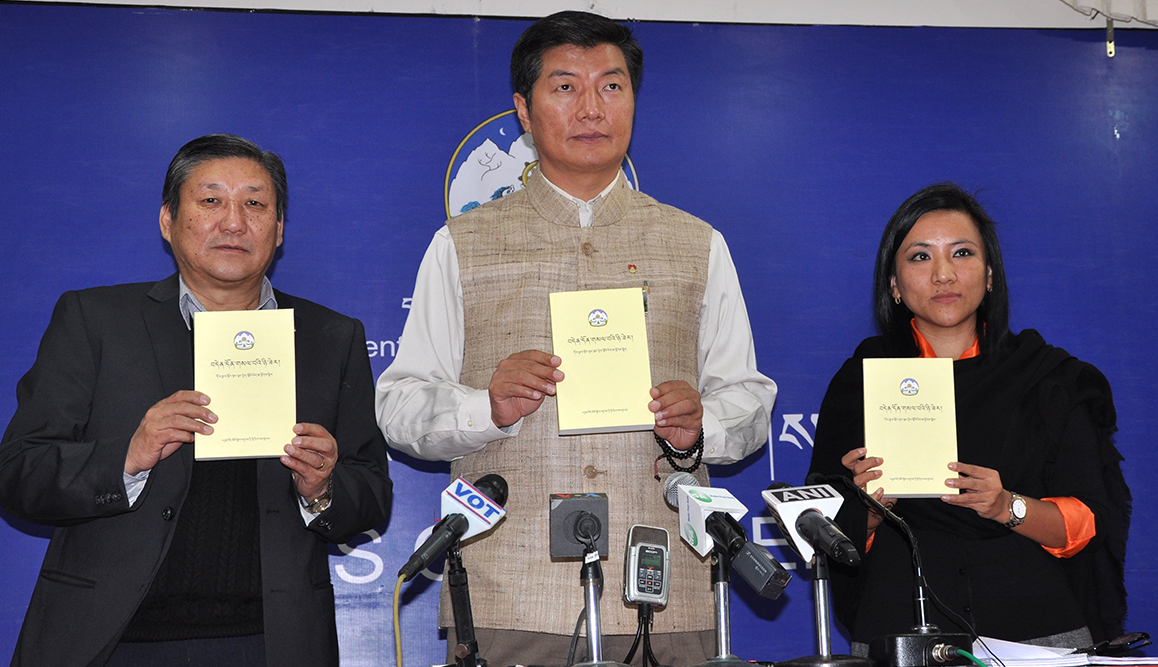 Dhardon Sharling, although disqualified as a CTA Cabinet member, was nevertheless placed in charge for her willingness to lead propaganda campaigns against Dorje Shugden Buddhist practitioners which she labels as a cult despite being a central practice of the Gelugpas for almost four centuries.

The corruption within the ranks of the Tibetan leadership is clearly rife and unbridled. There can no doubts about that and so Tenzin Dhonden is not an exception. When we examine what the Tibetan leadership has trained its focus on in recent decades, we see little or insignificant initiatives to improve the quality of life of the Tibetan people living in the refugee settlements. After 50 years of grants, donations and sponsorships from a tremendous network of Tibet Houses and NGOs scattered worldwide, we see no outstanding Tibetan personage in the arts or the sciences. Most remain poor and those who seem to have eked out a living and have some semblance of a future, do so not because of the CTA but in spite of the CTA.

Instead the Tibetan leadership has invested heavily in one single purpose – to preserve the status quo. In order for it to do so, it keeps the world public focusing on China as an external enemy, even as it distracts its own populace with internal bickering over CTA manufactured issues such as Rangzen and Umaylam, the Dorje Shugden controversy and the two Karmapas conflict. These are all cleverly crafted conflicts which could have been so easily solved had the Tibetan leadership wanted to. But there is no fortune to be made in an environment of peace and harmony. In the meantime, conflicts and intense quarrelling creates fortunes for some in power who profit from the miseries of others. It is an old story. We just did not expect it to be played out in Shangri-La. 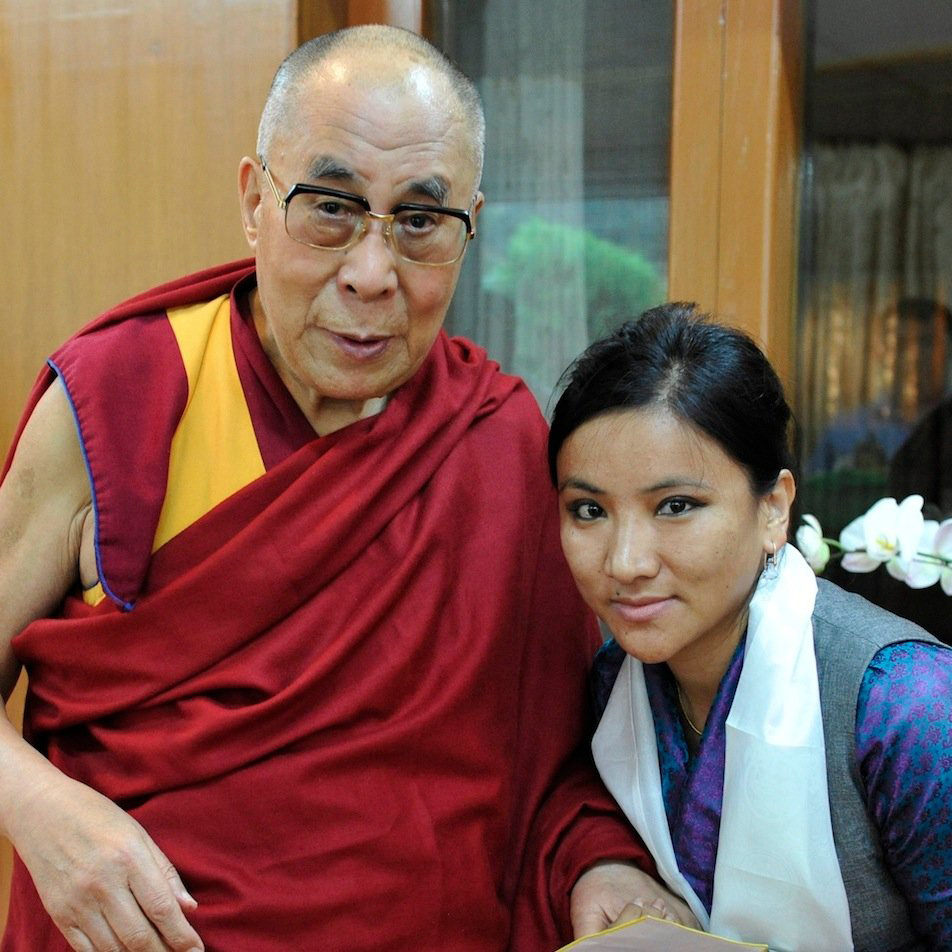 Carrying out the Tibetan leadership’s instructions has its rewards. To be seen with the Dalai Lama is an important seal of protection and an increase in status within society. You become a mini-celebrity with instant and stable access to funding and sponsorship. In fact, many people vie with each other to have such an opportunity to receive gains for themselves.

It remains to be seen what happens to Tenzin Dhonden. If history is any gauge, then nothing much. As a matter of fact, if the victim in the Dhonden case had been anyone else besides a very wealthy and influential American, the issue would probably not have interested The Guardian. It is well known in Tibetan society that one is rewarded not by being diligent and honest and sincerely fighting for Tibetan progress. In fact, these people such as Lukar Jam, a popular candidate for the 2016 Sikyong position, are seen as nuisance for the Tibetan leadership to deal with. In the present construct of the Tibetan leadership, you rise when you are prepared to pull out all the stops when carrying out the instructions from the top, regardless of who you have to backstab, betray or step down on. Hence you have: 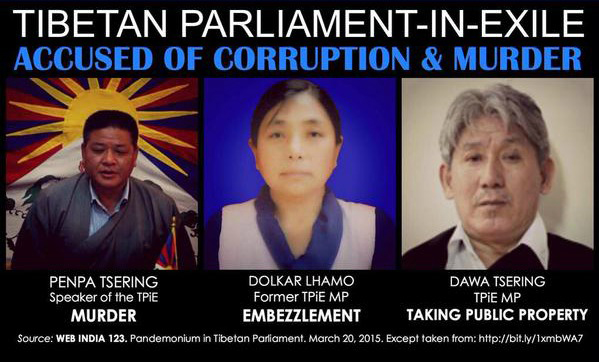 Thus, when you consider all these factors and evidence, Tenzin Dhonden is merely a subtext in a much bigger and sinister story. If Tenzin Dhonden is the symptom of the real ills of Tibetan society, then as long as the Tibetan leadership protects, rewards and encourages the exploitation of their own people, there is no hope that Tibetans will ever realize any of their dreams. And it will be clear for everyone to see that the responsibility for that lies squarely and solely on the shoulders of the CTA.