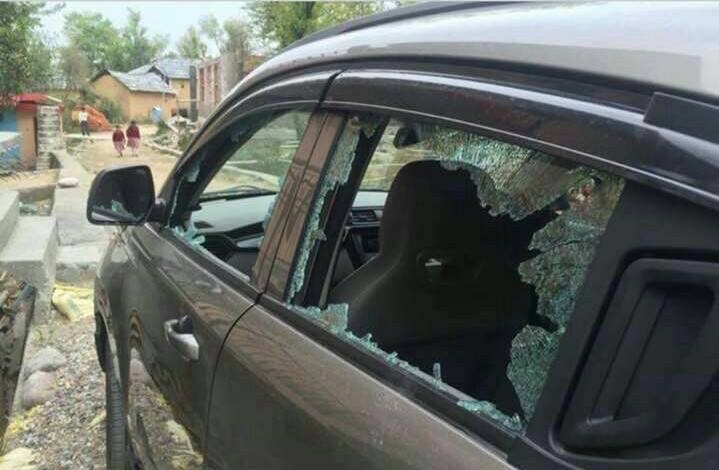 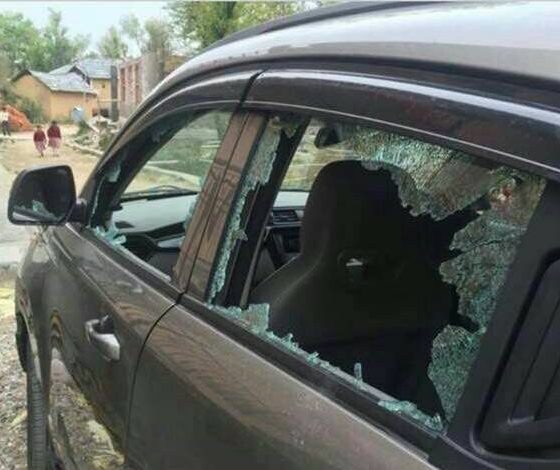 On March 23, 2017 the Tibetan community woke up to news that Lukar Jam Atsock, former Sikyong 2016 candidate, had been made the victim of a violent attack of vandalism. Lukar Jam, who had recently been accused of speaking against His Holiness the Dalai Lama, said that as a result of the attack his family now feel threatened by anti-social elements. Sadly, this is not the first time the Tibetan community have reacted in such a manner against someone perceived to be speaking against the Dalai Lama. Dorje Shugden practitioners, for example, have been threatened and harmed for the last 20 years because the Tibetan leadership repeatedly and consistently paints them as traitors of the Tibetan people, the Tibetan cause and specifically the Dalai Lama, although none of this is the case.

The world can see clearly now that the Tibetan leadership’s methods are all for political gains, to the point they will pit their own people against one another in a kind of real-life ‘Hunger Games’ to see who emerges the winner. In this case, the winner is usually The Capitol, or the tyrannical upper echelon ensconced in the relative safety of Dharamsala watching as their people tear one another to pieces, in a political game of their own design. Now that the rest of the world has entered the 21st century, it is time that the Tibetan leadership, a self-proclaimed democracy, learns the proper and correct way of dealing with dissent and certainly, directing violence against their own people is not the way to go. DHARAMSHALA, MAR. 24: Tibetan writer and former Director of the Gu-Chu-Sum organization, Lukar Jam Atsok, who has been at the center of controversy and condemnation for an alleged troll against the Tibetan leader the Dalai Lama has said he and his family – his wife and two children – feel “threatened by anti- social elements”.

The statement from the man who was also one of the candidates for the last Tibetan general elections came after he found his car vandalized by unidentified miscreants last night near his rented house near Norbulingka institute in Sidhbari area here.

Lukar Jam and his wife Pema Choedon have filed a police complaint regarding the matter. In their complaint letter addressed to the Superintendent of Police, Kangra at Dharamsala, the couple appealed for a thorough investigation saying that “anti social elements fulfilling other party’s agendas may be active within the community.

The copies of the letter have been sent to SHO, Dharamshala Police station, the Indian Intelligence Bureau, as well as the Security Department of the exile Tibetan government (known officially as the Central Tibetan Administration).

Jam found out about his car’s broken windows early this morning after his neighbor informed him. In his complaint with attached pictures, Jam wrote that the windows and wind shield of his car was broken with a rock. Jam’s wife Pema Choedon wrote on her Facebook page that she was certain it was not a random act of vandalism or attempt at thievery. She also wrote that the “attack on property” was preceded by incidents when her husband was openly “challenged, warned of physical harm”. However, the family said that they suspected the culprit to be anti social elements within the (Tibetan) community although they have “no specific suspects”.

The former political prisoner was recently in the center of a much debated issue regarding his poem that many alleged made an undue reference to the Tibetan leader His Holiness the Dalia Lama. Earlier last month, Jam posted a eulogy dedicated to the late Tibetologist Prof. Elliot Sperling on his Facebook page. The English translation of the original Tibetan language post which was also posted on the same page stated, “Not out of loyalty, but speaking of your ethical courageous position, you (Elliot Sperling) are the one who should have lived for 113 years”. Although the post had not made any direct reference to the Tibetan leader, the post has since been condemned by many Tibetans and attracted comments, many critical of his view.

The Tibetan PM Lobsang Sangay on March 10 said, “Lukar’s remarks were objectionable and unfortunate. Such statements sow discord in the Tibetan community and gives reasons for adversaries to rejoice.” In the ongoing session of the Tibetan Parliament, PM Sangay said that Lukar Jam has a history of making denigrating remarks to the Tibetan leader. A lengthy discourse followed in the Tibetan parliament where opinions were divided on the issue. 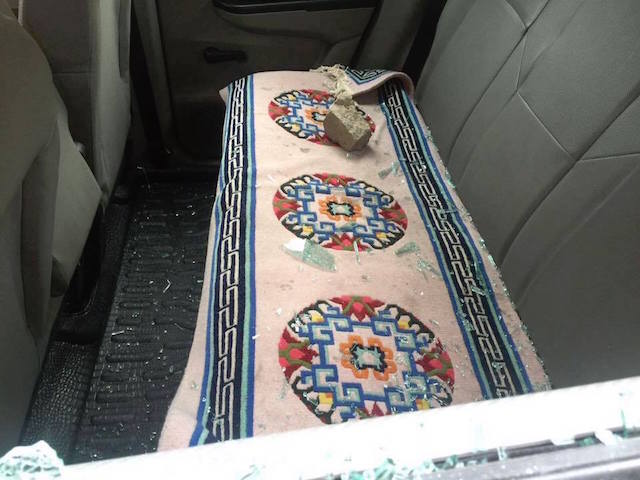 Speaking to Phayul, Jam said, “I suspect the crime was perpetrated by someone who did not agree with my recent post or by an opportunistic agent of China aiming to plant discord within the Tibetan community. Either ways, the responsibility of the incident rests upon the CTA leadership who made public statements on the issue as well as individuals and proxy accounts online that created a ‘misunderstanding’ between him and the general public.” He also said he will leave the issue in the hands of the Indian law enforcement authorities.

Earlier in 2016, he stood in the Tibetan general elections for the Prime Ministerial post of Central Tibetan Administration and was the sole candidate that stood for complete independence of Tibet as his core stand for the resolution of the Tibetan issue. During his campaign, he was alleged that he had made reference to the Tibetan leader His Holiness the Dalai Lama in poor light although he has denied it later. 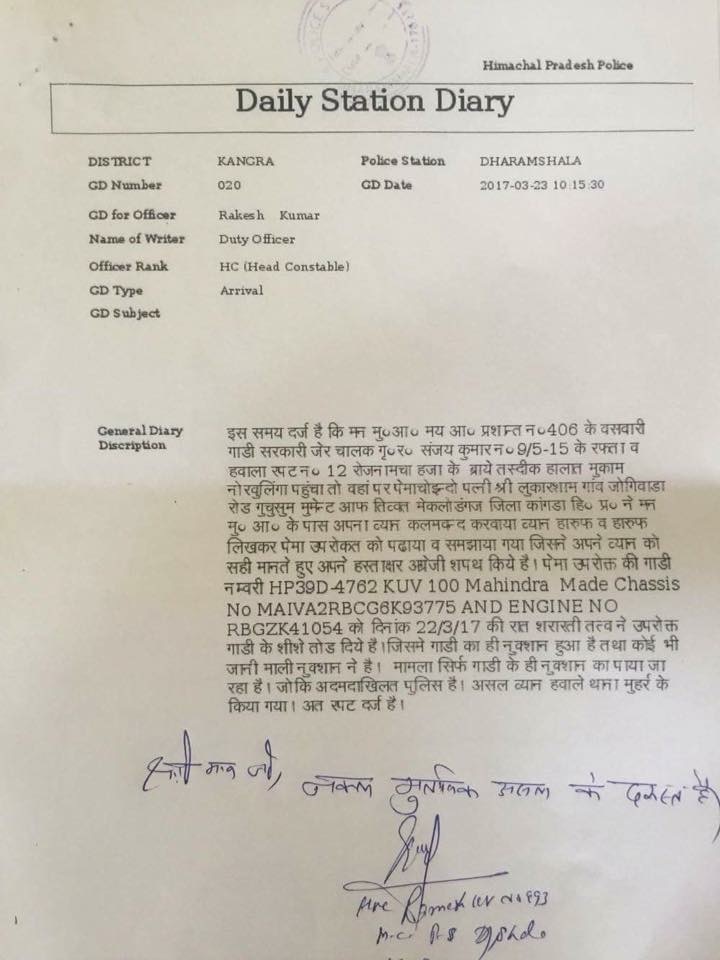 A copy of the police report lodged regarding the incident 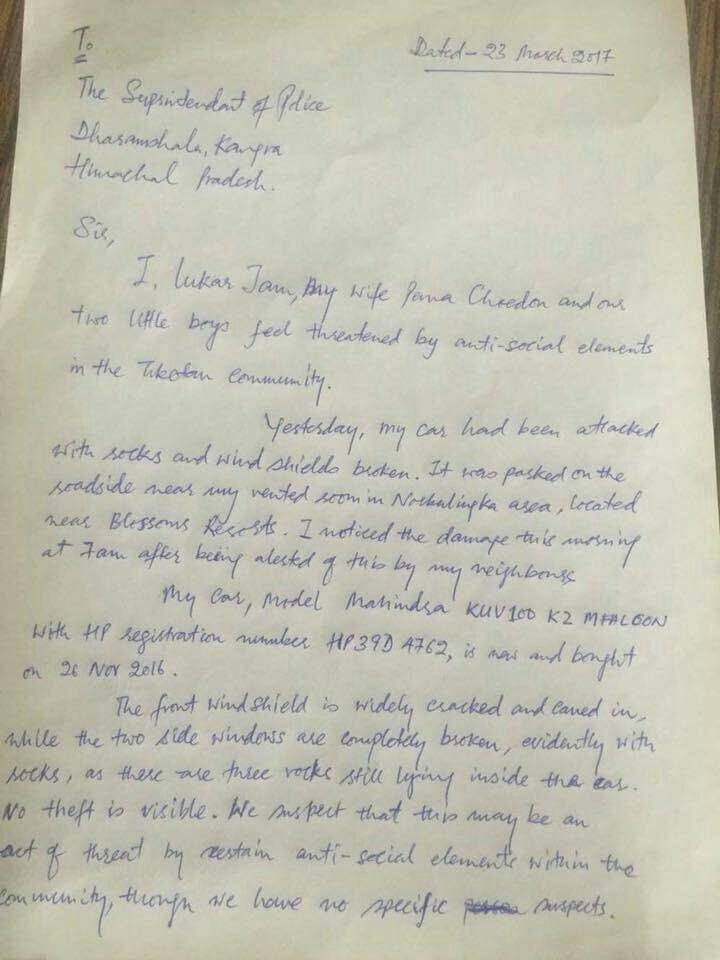 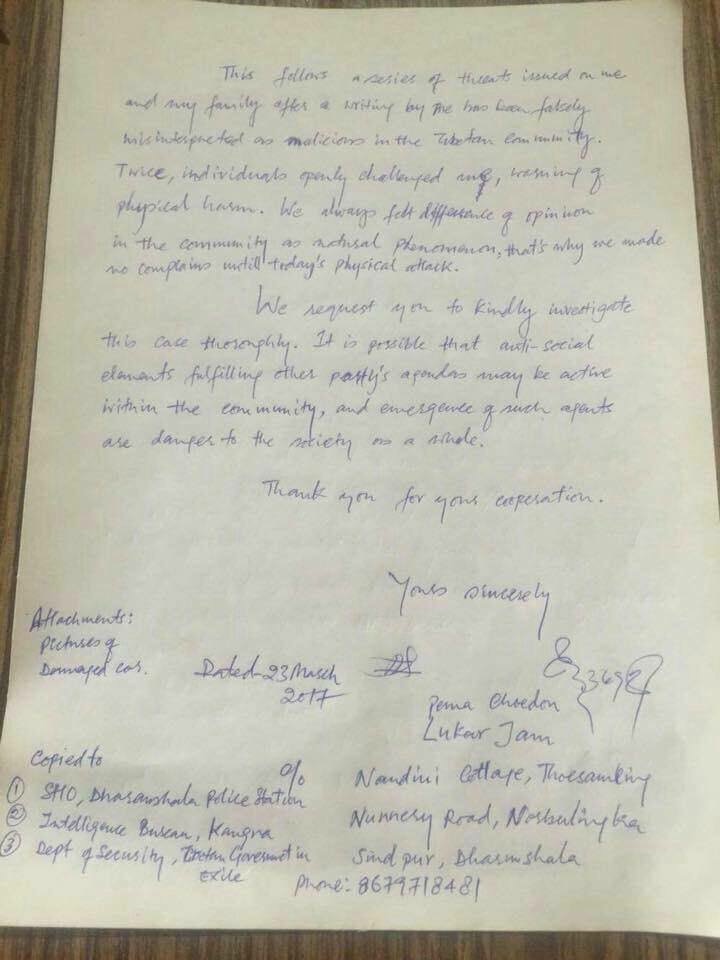 Police on the scene