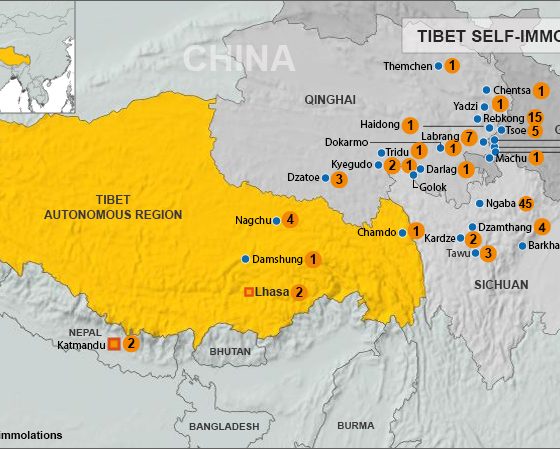 Top image caption: The self-immolations in Tibet are in reality suicides, and a running count of the number of times the Tibetan leadership has disappointed their people with their inability to initiate meaningful dialogue with China. Click to enlarge.

In the wake of the latest self-immolation where a young farmer set himself alight for the Tibetan cause, a few questions will invariably spring to the mind of any reasonable and objective observer. Over and over again, Tibetans young and old have taken their lives for the Tibetan cause and it is a trend that does not look to be slowing down nor stopping in the near future. So the main concern would be why people from a Buddhist community keep committing suicide despite being guided by perhaps the most famous Buddhist principle of all, to refrain from killing. What is happening to the community as a whole that is compelling so many Tibetans to act this way? Why are Tibetan suicides continuing to increase unchecked? To find the answers, we need to look to their leadership. For despite being a Buddhist community and a self-proclaimed democracy, the Tibetan leadership have remained comparatively silent over the self-immolations. In their silence and their refusal to condemn these deaths, the Tibetan leadership are actually complicit in the deaths of their people, by doing nothing to stop them.

Some might claim that the leadership do not know what to say, or are unaware of the need to say something. That however, could not be further from the truth. The silence from the Tibetan leadership is definitely intentional as demonstrated by His Holiness the Dalai Lama’s most recent interview with John Oliver. During the interview, His Holiness said that it is difficult for him to speak against self-immolations because to do so would cause suffering to the loved ones of those who killed themselves. It would lead them to think their deaths were in vain.

Instead of that thought, we request His Holiness to think the other way, and think of all the lives he could have saved and could save in the future. Think of the mothers and fathers, and the hundreds of families whose pain and anguish would not have arisen if he had said something against the suicides many years ago. Think of all the people he could save from experiencing this same pain in the future because fewer people are encouraged to kill themselves.

But does Dharamsala, where the Tibetan leadership are headquartered, really care about this when self-immolations are convenient scapegoats for their failures? In the last 60 years, Dharamsala has been unable to provide a viable source of income for their people, and continues to rely on international handouts whenever disaster strikes. By any sociological and economical measure, 60 years is more than enough time to develop a community. Governments have fallen and risen, wars have been fought and brand new countries have been established in that time. Thus the Tibetan failure to develop their community into a self-sustaining one can only be attributed to its political leadership. 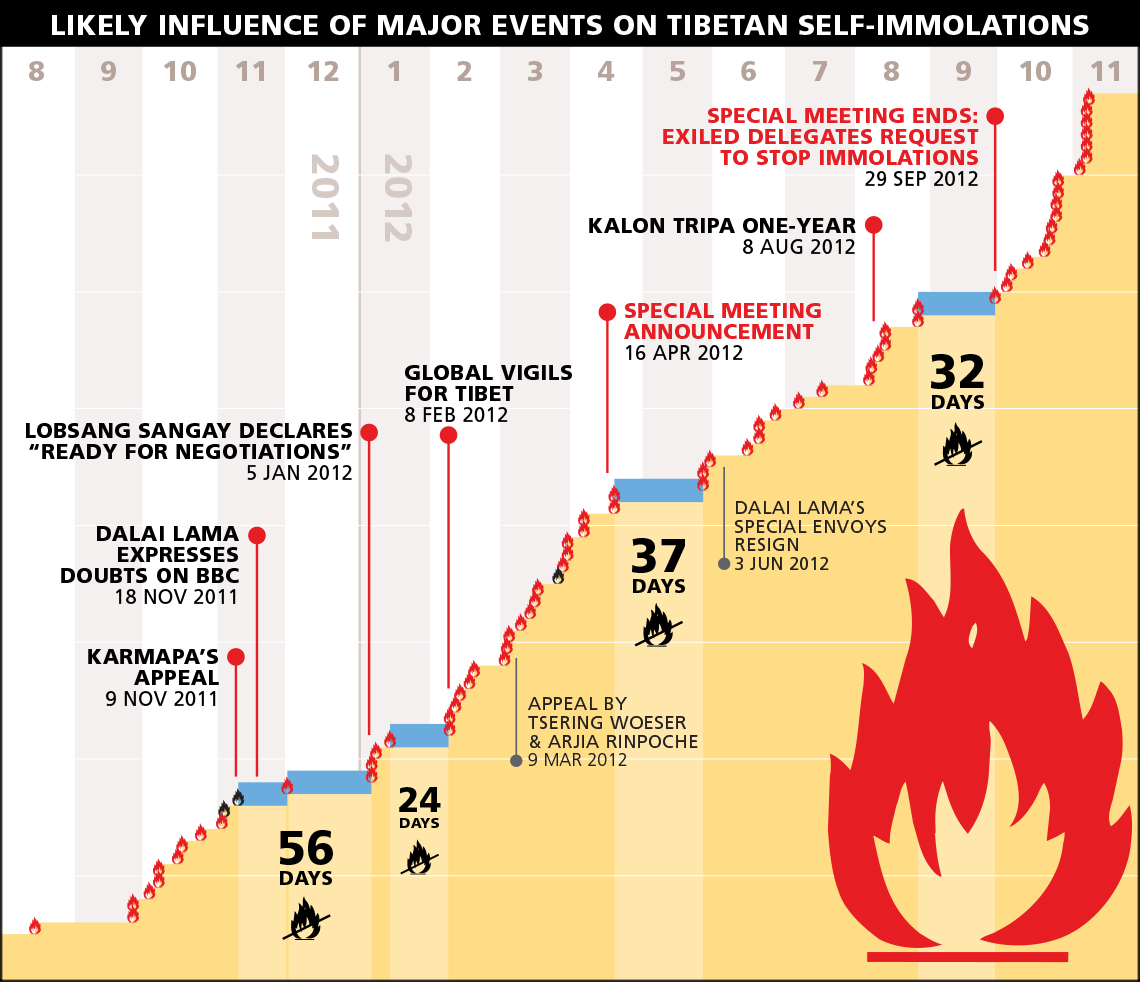 There is a relationship between the Tibetan leadership’s activities and the death of their people. In general, whenever a significant individual (for example His Holiness the Dalai Lama or Karmapa) hint at disapproval of the deaths, the number of self-immolations reduces. Clearly the Tibetan leadership’s words have a huge impact on the lives and deaths of their people. Click to enlarge.

And so as long as there are Tibetans who keep sacrificing themselves for Dharamsala’s lousy leadership, the leadership will always have a scapegoat for their lazy politics. What is wrong with the Tibetan leadership that after 60 years, they still cannot manage to secure meaningful dialogue with China? Surely that would be the most urgent task, something that the leadership would prioritize over self-aggrandizing speeches and attacks on their political opponents. One would certainly assume that they would prioritize this, and do whatever it takes to stop the burning of their own people.

In actuality however, self-immolations do not add pressure to China to open dialogue with the Tibetan leadership. Self-immolations actually give the Tibetan leadership an excuse to be lazy about their interactions with China. They are a convenient tool for Dharamsala to procrastinate in getting results, leading to the subconsciously-held attitude that “there is always someone else who can burn themselves, we can afford to wait”.

But the fact of the matter is, the Tibetan community cannot wait. It is a numbers game that the Tibetan people are playing, and it is the numbers game that the Tibetan people will lose. By sheer volume, the Chinese vastly outnumber the number of people who ethnically identify as Tibetan, most of whom live under Chinese control anyway. All the Chinese leadership needs to do to win is to simply wait it out. Wait it out until Tibet runs out of people willing to kill themselves.

So some might even say that the Tibetan leadership’s intentional silence is in fact their encouragement and approval of these suicides, to distract from their political failures. This is a hypocritical view indeed considering that they always talk about being guided by Buddhist principles, but it would definitely not be remiss to say that they rejoice in this loss of lives. Memorials exist in places like Majnu-ka-tilla in Delhi and Dharamsala in North India for the Tibetans who died in vain. Who else in the world erects memorials for those who commit suicide? The cold hard truth is that they killed themselves and their deaths did not bring about any geopolitical changes. Those public memorials do nothing but glamorize these deaths and encourage more people to follow in their footsteps, but there is no glory in young men and women burning themselves because the leadership are too busy lining their pockets to provide for their people.

The Tibetan leadership think this list memorializes the deaths and pressures the Chinese leadership into initiating dialogue but what it really is is a list of how many times Dharamsala has disappointed and failed their people. Click to enlarge.

Thus, in reality what the Tibetan leadership and Tibetan non-governmental organizations should do is stop glamorizing self-immolations as a glorious sacrifice for Tibet. Stop promoting self-immolations, and stop generating infographics and graphs and charts to show how many Tibetans have killed themselves for Dharamsala’s ineffective governance and inability to lead their people effectively. All these charts and graphs do is show just how badly the Tibetan leadership has failed their people, and how many times they have failed their people. For every Tibetan who sets themselves alight, it is another black stain against Dharamsala’s reputation, conscience and karma because it is something they could have stopped.

Having a conscience however, may not be something that Dharamsala has, judging from the contradictions in their politics. They eagerly blame the Chinese leadership for these self-immolations, while simultaneously contradicting their assertion that they should be an independent nation. Since they make this assertion, would it not behoove them to act like an independent government and take responsibility for their own people’s lives and deaths? In saying that this matter is up to the Chinese leadership, and that the Chinese are responsible for Tibetan deaths, the Tibetan leadership actually devolve responsibility for their own people’s lives to an external source. The sad thing about this graph is that it would be zero throughout the years if the Tibetan leadership were effective in their job, and if they spent more time serving their people instead of squabbling with political opponents. Click to enlarge.

At the end of the day, the buck stops with the leadership in Dharamsala and they – and only they alone – are answerable for the hundreds of men and women who have lost their lives for Tibet.