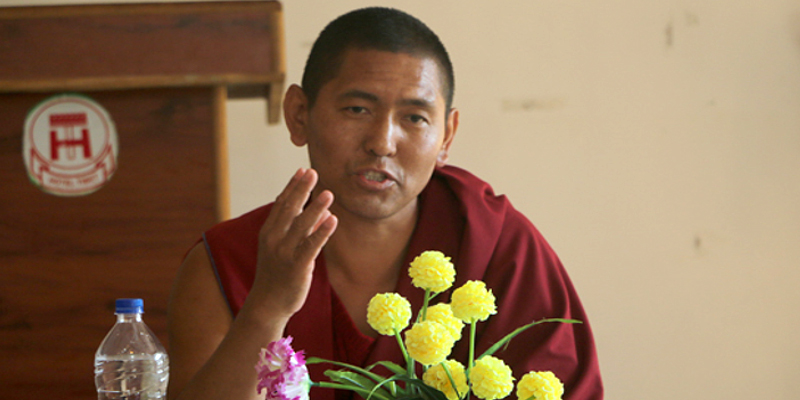 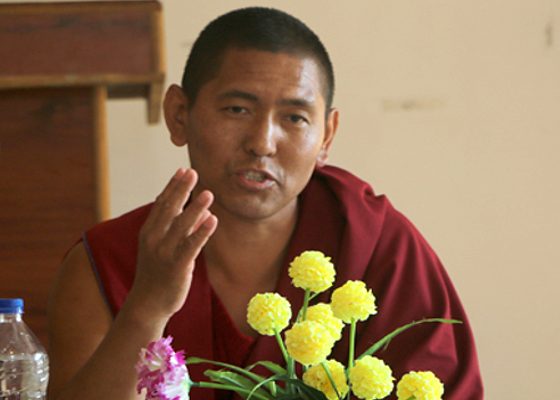 Top image caption: Thupten Choephel of Sera Jey Monastery in Bylakuppe, South India states clearly in a press briefing that his proposal of self-harm is a protest against the dirty politics that run rampant in the Tibetan exile community, with his greater goal being the Tibetan cause.

In the span of a few hours, multiple news pieces have come to our attention that spell doom for the Central Tibetan Administration (CTA, located in Dharamsala, North India). Each highlights how the CTA have failed their people, and more importantly, how others have begun to sit up and take action.

In the first article “Two Tibetans badly injured in skirmish between Tibetan and Indian men at Satuan”, we can see clearly how unhappy the local Indians are with the Tibetan refugees. It is typical of the Tibetans and especially the Tibetan leadership to extend practically zero assistance to any part of their host Indian society for over 60 years. On the basis of their refugee status, the Tibetans have received aid from other world governments and generous sponsors, and over time have built up their settlements complete with large multi-storey houses, glittering temples, big buildings and thriving businesses. Yet, the ‘rich’ Tibetans give only nominal donations and hardly reach out to help the thousands of impoverished Indians who live just outside the Tibetan settlements.

Clearly the Tibetans have forgotten that they owe everything they have to the kindness of the Indian government who gave them land, refugee status and the opportunity to build a new home in a foreign land. The Tibetans keep taking from their host country but give nothing back. It is no wonder that the local Indians are resentful, and this resentment that has been brewing for six decades has finally spilled over into violence. For certain, this will happen more and more as time goes on because the resentment amongst the Indian population is growing. The Central Tibetan Administration (CTA) can keep trying to publicize their Thank You India 2018 campaign, but the fact remains that nice words do not translate into tangible help, food, donations or supplies that go back to India and the Indian community.

The Tibetan leadership in Dharamsala is at fault for not highlighting that the Tibetans in India should do more for poorer Indians which would curb resentment. They have had six decades to do so. The Tibetan leadership must set the right example and educate the 100,000 Tibetan exiles in India to do more than just empty praises and nice words for the poverty-stricken citizens of their host country India. This violence is a direct result of resentment brewing throughout many Tibetan settlements in India which we last saw in the form of massive violent protests against Tibetans in Arunachal Pradesh state. There are many more cases which are not officially reported. The Tibetan leadership, also known as the CTA, are definitely indirectly and directly at fault.

In conjunction with the second article “Plot to blow up two buildings near Nechung Monastery foiled, probe on”, there have been multiple anonymous submissions to this website claiming that based on various WeChat conversations, it is allegedly unhappy Tibetans themselves who placed these bombs in Dharamsala. In fact, the placement of these bombs is extremely revealing. The building where the bombs were found have no particular significance as they are purely residential and without any notable residents. Therefore, it is only logical that the indirect target is Nechung Monastery as it is the main landmark in that Dharamsala neighbourhood. It is possible that the would-be bombers could not gain access to Nechung Monastery and had no other choice but to put it as close by as possible and hope that Nechung Monastery would somehow be damaged when the explosion occurred. (We at tibetworlds.com do not know anything further than what has been stated, and the perpetrators and their motives are all alleged. We are unable to confirm any details. For more information, it would be best to contact the relevant authorities in Dharamsala.)

Just think, this is the second bomb scare within the space of three months, the previous one being at Bodhgaya during the visit of His Holiness the Dalai Lama. Clearly the Tibetans are unhappy with the Central Tibetan Administration (CTA) and with their main advisor Nechung, whose pronouncements have influenced Tibetan policy and the Dalai Lama’s decisions for many decades. The Nechung oracle’s advice has been touted to be wrong most of the time. And so, having no other democratic outlet to express their dissatisfaction with their leaders, the Tibetan populace have resorted to explosive violence to show just how unhappy they are with Nechung’s bad advice and their government’s blindness in continuing to heed it.

Plot to blow up two buildings near Nechung Monastery foiled, probe on

In the third article “Monk Proposes Self Immolation Over Politics in Tibetan Exile”, Thupten Choephel of Sera Jey Monastery in Bylakuppe, South India states clearly in a press briefing that his proposal of self-harm is a protest against the dirty politics that run rampant in the exiled Tibetan community, with his greater goal being the Tibetan cause. More specifically, he quotes three main factors that have compelled his decision to engage in such drastic actions.

This extreme form of self-harm is Thupten Choephel’s last ditch attempt to bring attention to the bigotry and total lack of accomplishments of the Tibetan leadership, and their abject failure to make any headway for the good of the Tibetan cause and the Tibetan people. We at tibetworlds.com extend our deepest sympathies to Thupten Choephel and our sincere hope that he does not engage in such self-harm. Instead, we would like to encourage him to continue to speak up against the exiled Tibetan leadership headquartered in Dharamsala, North India, using peaceful methods, which is what other democratic nations do and to assure him that revolutions have been won without loss of life.

The Tibetan leadership has pushed this monk to use his own life to threaten them to stop the corruption, bigotry, lies, segregation, scandals, embezzlement and all the disharmony they have created pitting one Tibetan against another using regionalism, religion and superstitions. This monk is indeed brave for even daring to speak up within the ‘democratic’ Tibetan communities about the many scandals and corruption within the leadership and the Tibetan leadership surely will find ways to silence him. Just think, all this is happening while His Holiness the Dalai Lama is still alive. When His Holiness is no longer around, chaos will break loose in the Tibetan communities. And all this is the result of the Central Tibetan Administration’s bad leadership.

The only way to bring some hope back for the Tibetan people is to get rid of the current corrupt, exploitative leadership and instead appoint new leaders who truly care for the future of this once-proud nation – leaders who will sincerely put all personal agendas aside for the betterment of the country, its people and its future, and who will stop using religion to divide and segregate their people such as the Dorje Shugden issue. It will take more brave Tibetans in exile like Thupten Choephel to speak up and not be afraid any more to make a change. More will speak up as the Tibetans have lost hope.

Monk Proposes Self Immolation Over Politics in Tibetan Exile