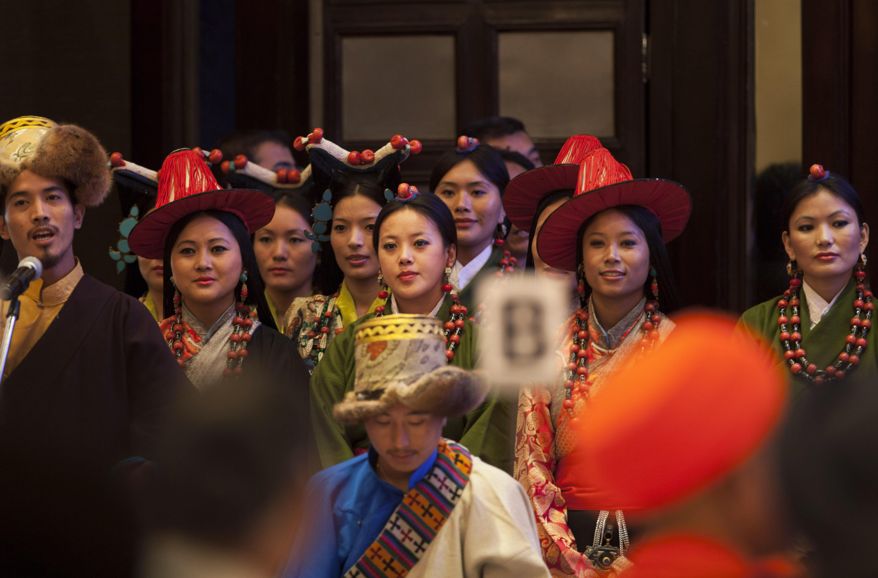 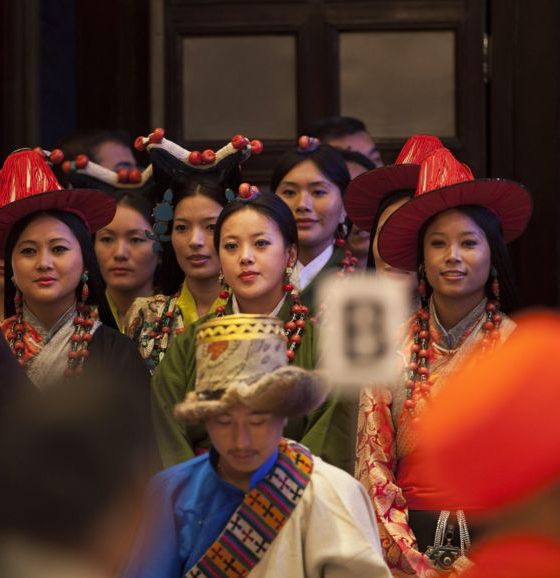 Top image caption: Exile Tibetans perform a religious song during an inter-faith meeting in New Delhi, India, Saturday, Sept. 20, 2014. The Dalai Lama brought religious leaders together on Saturday to mull some of India’s most pressing problems, from gender violence to widespread poverty, while praising the country’s religious harmony as proof to the world that different communities can live peacefully together. (AP Photo/Tsering Topgyal)

The following article was sent in by a contributor who only wishes to be known by ‘Sally’. Sally has worked as a volunteer in various Tibetan advocacy programmes, and in the last six years she was actively involved in the International Campaign for Tibet (ICT). Sally has expressed concerns with what she deems to be serious malpractices within a number of international bodies that campaign and raise funds for the advancement of the Tibetan cause. Her request was for this site to publish the following article.

As Chinese battleships advance in the South China Sea, breaking news that 147 people in Tibet have now set their bodies on fire to protest the Chinese Communist occupation of their homeland adds to fearful tremors racing through Asia about China’s rise. Tibet, one of China’s most prized possessions, is a war zone, and this poses a great danger to stability in Asia.

In 1973 my father, Sen. Daniel Patrick Moynihan, was appointed U.S. ambassador to India. We met Tibetan exiles, learned of China’s conquest of Tibet, which enlarged Communist China’s landmass by nearly 50 percent, and poses a security threat to India, with Chinese armies stationed on its Himalayan borders for the first time in history. For many years I worked with Radio Free Asia, and in the 1990s I was a consultant to the International Campaign for Tibet (ICT). Founded in Washington in 1988, ICT has for many years been seen as the “voice of Tibet” in Washington. Many Americans donate generously to ICT, with trust that their hard-earned dollars advance ICT’s goal: “Protecting human rights and democratic freedoms for the people of Tibet.” But as Tibet burns, it is time to assess whether ICT is achieving its objectives.

Lodi Gyari, former chief envoy of His Holiness the Dalai Lama, last year resigned from his position as director of ICT, and other staff changes were made. Many are wondering why Richard Gere, ICT Board chairman, installed Matteo Mecacci, a former Italian parliamentarian whose resume shows work in Eastern Europe but nothing in Asia, to operate the world’s largest (and best-funded) Tibet advocacy organization.

Mr. Mecacci is a prolific blogger: In a recent letter to ICT donors, Mr. Mecacci wrote:

Too many people think of Tibet as Shangri-La — a Himalayan paradise where everyone lives in peace and harmony. Nothing could be farther from the truth! In a perfect world, Tibetans would be living in peace and you could stand down. Your 2015 gift will help give Tibetans hope for an end to their suffering and the start of a brighter, peaceful future.

This sounds promising, but Mr. Mecacci does not explain exactly how giving money to ICT will accomplish this lofty goal.

ICT is hardly a cost-effective model of a non-profit organization representing a small, penniless refugee community. Indian government surveys report that 150,000 Tibetan refugees are trapped in disintegrating settlements, with poor, often broken families living on less than $1,500 a year. ICT’s annual operating budget is $3.6 million. ICT’s annual report and Charity Navigator reveal that it spends most of each dollar on overhead, including 44 percent for fundraising. The $1.6 million spent on fundraising each year reflects a breathtaking level of inefficiency. While ICT’s 2014 financial statements have not been released, Mr. Mecacci’s annual salary is alleged to be $150,000. Based on ICT’s 2013 tax filing, Mr. Mecacci earned $16,800 for less than one month’s work in December 2013, and ICT spent $640,000 on just one direct mail company.

In 2002 ICT helped push through one substantive bill, the Tibet Policy Act. That was 13 years ago. ICT publishes records of human rights abuses in Tibet, which, sadly but plainly, have no power to alter China’s oppressive rule over the Tibetan people. But ICT is not addressing the crisis of statelessness that is overwhelming Tibetans in exile. Refugees are especially vulnerable to exploitation, bribery and coercion, and Tibetans are no exception. I have interviewed many Tibetans in New York City, trapped in an illegal alien underground, desperate to escape refugee status in India or Nepal.

Illegal passport rings operating from India, trafficking Tibetans to the United States, and the proliferation of fake asylum claims have harmed the reputation of Tibetans with American officials. In 2005 the “Fake Nun” scandal erupted, when Sonam Chodon, a Tibetan from Nepal, claimed that she was a Buddhist nun fleeing persecution in China, became a media sensation and was granted asylum, but was later charged with using a fake passport and lying to authorities. A U.S. diplomat told me:

There is a lot of sympathy for the Tibetan people, but in the past two decades so many have come to the U.S. on tourist or student visas then immediately claimed asylum, used fake papers, broken the rules in other ways. There is a clear lack of leadership.

In 1990 the State Dept. issued 1,000 immigrant visas to Tibetans, but in 25 years, ICT has not successfully advanced any legislation allowing more Tibetans to resettle in the United States, or taken the lead in providing legal counsel about rights and procedures whereby refugees can legally immigrate. None of these matters are addressed in Mr. Mecacci’s blogs.

For the many millions of dollars that have flowed through ICT over 25 years, the story of China’s strategic and resource advantage gained by Tibet’s capture, has received scant attention or analysis. In January 2014, I testified before the U.S. House Foreign Affairs Committee about the explosion of Chinese hydro dam construction on Tibet’s rivers, and the environmental catastrophe looming over the nations of South and Southeast Asia, which are nourished by Tibet’s waters. Afterward, members of Congress, scientists, and military officials, approached me in evident shock, to ask, “How come we never heard any of this before?” I was stunned: The International Campaign for Tibet failed to get the basic facts about China’s control of Tibet — the Water Tower of Asia, one of the greatest crises facing the 21st century — on the desks of Congress and the Pentagon.

Many Tibet support groups are concerned that ICT has no clear purpose other than self-preservation, raising funds to pay for trips to Asia, comfortable salaries and maintenance of an elegant townhouse in Dupont Circle officially assessed to be worth $2.7 million. Many activists groups have done far more on far less, but ICT remains the top-funded Tibet organization in America.

Richard Gere, as head of the ICT Board, has said he wants to focus on Chinese outreach, dialogue and peace. This is a noble aspiration, but it is more a sentiment than a strategy. At this late date, ICT must make a better case for funding than Mr. Mecacci’s breathless and exclamatory message: “You give me hope about Tibet. More important, you give hope to Tibetans for a better future!” Promoting comforting stereotypes of cheerful-but-needy Tibetan refugees is a disservice to the Tibetan people, and obscures the hard geopolitical facts about what China’s dams, mines and armies are doing to Tibet’s environment, Asia’s waters and the region’s stability. The real story needs to be told.

Maura Moynihan, daughter of the late Sen. Daniel Patrick Moynihan, has been a longtime supporter and activist for the Tibet cause.

Why doesn’t the CTA help Nepal?