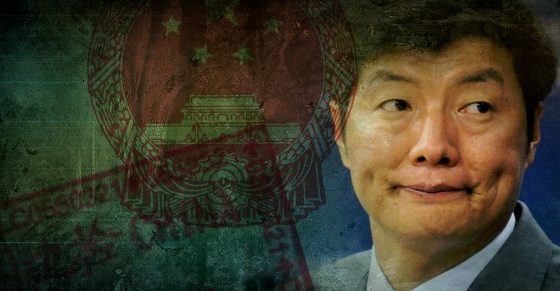 Below are two articles received reviewing the Tibetan leadership’s stance towards applying for Indian citizenship.

In a scathing review of the Tibetan leadership’s latest actions, Mila Rangzen has recounted the Central Tibetan Administration’s (CTA) recent policies towards the news that Tibetans born between 1959 to 1987 will be able to gain Indian citizenship. Of particular concern for him were the struggles ordinary Tibetans will face to get citizenship, and the double standards that exist.

For many people who do not have intimate knowledge of life in the Tibetan settlements under the Tibetan leadership, Mila Rangzen’s account will indeed be an eye-opener. His writings come from the point-of-view of a Tibetan who does not appear to have any allegiances to any religion that he can be accused of bias, who does not have any associations that risk him being accused of being Chinese, and who appears only to be interested in the welfare of his people.

In addition to the points that Mila Rangzen has raised, it is important for people to remember this:

1. When ordinary Tibetans have gained Indian citizenship, they will no longer rely on the CTA for anything, just like Tibetan-Americans, Tibetan-Canadians, etc.

2. Mila Rangzen raised the issue of the CTA being invested in keeping their people poor

3. The CTA has a “divide and conquer” mentality even with their own people

4. Another issue that Mila Rangzen’s article raised was that of double standards.

5. Racism and double standards. Anything Western and European is acceptable because of money, and the Tibetan leadership are deathly afraid of doing anything to upset the West because they are a source of money. Simultaneously, anything Indian is trampled upon.

Is Indian citizenship for Tibetans a threat to the Tibetan cause?

Click on image to read the comments. Source: https://www.tibetsun.com/opinions/2017/08/07/is-indian-citizenship-for-tibetans-a-threat-to-the-tibetan-cause

Tibetan leadership refuses to allow Tibetans to get Indian passport

In a bold and daring move, the Central Tibetan Administration (CTA) also known as the Kashag, have effectively blocked Tibetans in exile from becoming Indian citizens. A memo issued on July 5, 2017, which was circulated to CTA offices in Tibetan settlements in India, saw the Kashag ordering that Tibetans seeking Indian citizenship are not to be issued No Objection Certificates (NOC), a document necessary in the naturalization process. This move however creates two huge political fall-outs:

At this point, one could ask who actually gives the Tibetan leadership the authority to impose these rules on Tibetans living in India? It is quite simple, it is the Indian government. Without the Indian government, the Identity Certification (Yellow Book) issued to all Tibetan refugees has no power. So it is especially galling that when the Indian leadership says it is okay to give Tibetans citizenship, the Tibetan leadership steps in to say it is not even though they have no power to do so. Why does the mouse try and tell the lion what is acceptable and not acceptable?

So it is important to realize that the CTA’s authority is dependent on the Indian government and on their own, they have no power or influence, just like how paper money is worthless without gold reserves to back it up. It is this same Indian government who is now offering Tibetans citizenship and are in effect threatening the CTA’s hold on their people. As people begin recognizing the benefits of being Indian, they will want to take up citizenship, come under Indian governance (instead of Tibetan) and thus effectively end the CTA who will no longer have anyone to govern.

And of course, as per Tibetan government modus operandi, there has been no further response from the leadership about this when questioned. Instead they have blamed the media for creating problems and refused to be interviewed to clarify matters for the public. And while the media are asking questions in their pursuit of the truth, if they are not careful, they will be shut down just like the Mangtso newspaper was for publishing views that contradicted the Tibetan leadership’s.

What the Kashag have said is that that Tibetan youth should not just think of the short-term benefits of becoming Indian citizens, but of their Tibetan identity. It is their way of discouraging the Tibetan youth from becoming Indian citizens, by emotionally blackmailing them from not taking up an Indian passport. For the most part, the Kashag have been successful and some young Tibetans are insisting that you cannot be Tibetan if you hold an Indian passport. But this is extremely hypocritical since top CTA officials like Sikyong Lobsang Sangay, Dhardon Sharling, and Gyari Dolma are themselves citizens of other countries. What is more, they have lived at least 20-30 years this way; the Tibetan youth have lived as Tibetan refugees THEIR WHOLE LIVES so who is more Tibetan now? So if Tibetanness is measured by the passport one carries, and Tibetanness is the basis of someone being qualified to have an opinion or to lead the community, then by that logic the Tibetan leadership are the least qualified to do anything. Why are they not forced to think about their Tibetan identity and give up their foreign citizenship, unlike other people who want to get an Indian citizenship? These questions raise some interesting and noteworthy points to remember:

All in all, India has been extremely benevolent and patient towards Tibetans for 60 years. Still, it is no surprise that they are doing this because they need to look out for their own country as well, and it is simply not pragmatic to risk the welfare of over 1 billion people for the complaints of 150,000 exiled Tibetans. So if the CTA keeps moving to block the Tibetans from gaining what is rightfully theirs, the Tibetan leadership might just very well find themselves under more pressure. Growing frustration on India’s part may mean that when it comes to the Tibetans, if the leadership complains too much or make things too difficult, the Indian leadership may just respond by making it even easier for Tibetans to become Indians, and thus drastically speeding up the inevitable – the demise of the CTA.

In violation of Charter, Kashag impedes issuing of passports to Tibetans

Click on image to read the comments. Source: https://www.tibetsun.com/news/2017/08/03/in-violation-of-charter-kashag-impedes-issuing-of-passports-to-tibetans

The real reason the Tibetan leadership does not condemn self-immolations