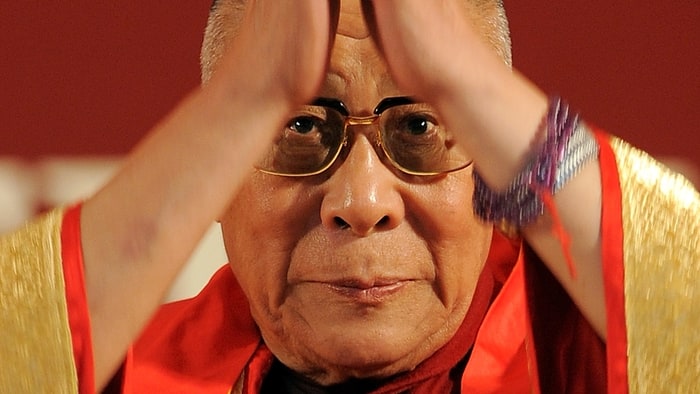 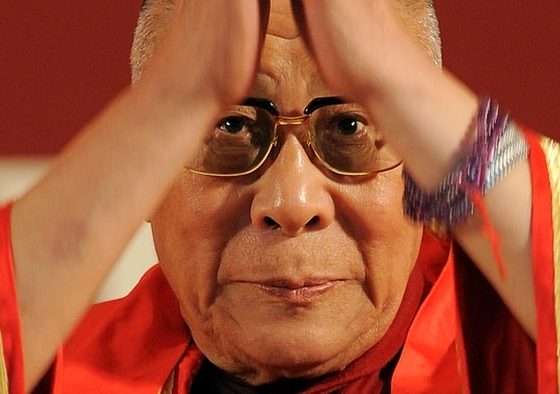 DELHI – There is more disappointment in store for the Central Tibetan Administration (CTA), who are the Tibetan leadership based in Dharamsala. It comes in the wake of Indian Foreign Secretary Vijay Gokhale’s memo discouraging Indian officials from attending events hosted by the CTA. It has now come to light that the main event of the CTA’s year-long #thankyouindia2018 campaign has been moved from Delhi to Dharamsala.

Planned for 1st April 2018, the event was due to be held in Thyagaraj Sports Complex, a 5600-capacity stadium. When news first broke about the Honorable Gokhale’s note, it was speculated that the CTA shifted the event from high-profile Delhi to low-profile Dharamsala for fear of a spectacularly bad turnout by the Indian ministers. After all, no one would cancel a major event just three weeks before it is due to be held, solely on the basis of newspaper reports and without first corroborating with the ministers’ personal assistants.

Yet, we now know that the event was moved from Delhi to Dharamsala at the behest of the Indian government, known colloquially as “The Centre”. Why would the Tibetan refugees’ biggest sponsor, who has given them millions of dollars in tax-free aid as well as rent-free land for 60 years, suddenly make such a request? The only logical conclusion is that this is a clear sign of their eagerness to mend their relationship with China. As a consequence of this move: 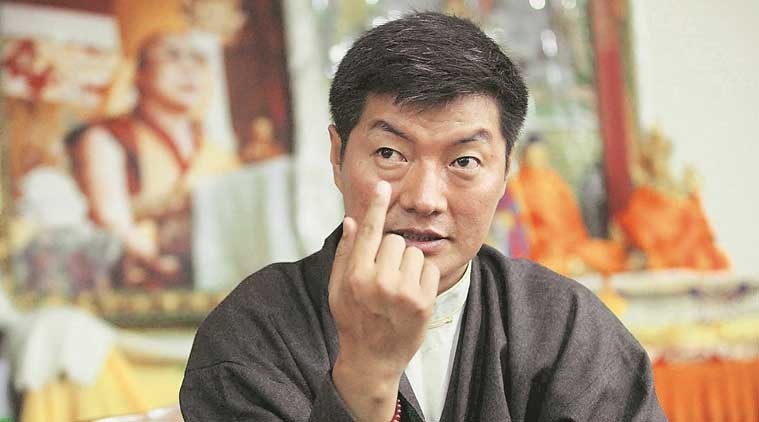 It has been speculated that the Indian government themselves leaked the Foreign Secretary’s memo to discourage other people, such as Bollywood stars and Indian entrepreneurs, from attending CTA events in lieu of the ministers. If that is indeed the case, the CTA can look forward to even more poorly-attended events for the rest of the year. Interestingly, the memo and cancellation of the event was widely covered by the Indian press, but not by the Tibetan ones. Clearly the Tibetan papers are embarrassed by what most have correctly perceived as declining Indian support for the Tibetan leadership.

The Tibetan media have correctly appraised the situation but the same cannot be said of the CTA, who have demonstrated in the past that their normal reaction is to blame someone else. Given the CTA’s history, there is therefore the very real possibility that attacks against Dorje Shugden people will temporarily increase, since the Tibetan leadership need to retaliate and have to find a scapegoat for their failures. They need some means of redirecting their people’s anger and frustration against them, towards an easy target that has been unfairly vilified for 20 years.

Over time however, as more and more people join the Indian government in disassociating with the Tibetan leadership in favor of a relationship with China, the CTA will have no choice but to humble down. It has been 60 years of unchecked spending and unaccounted-for donations, and 60 years of everyone lauding them as paragons of the non-violent model of political struggle. These past six decades have led to a government that is arrogant, overreaching and overestimating their own influence and power.

Unfortunately, all of this news will only serve to disappoint His Holiness the Dalai Lama, who truly loves the Tibetan people and will perceive this incident as a loss of support for the Tibetan cause, and conclude that his people are not doing their job. This will not be the first time that the Tibetan leadership have disappointed His Holiness the Dalai Lama who has given his life to his people and unfortunately, because the CTA are driven by greed and self-gain, it will not be the last. Over and over again, they have embarrassed the Tibetan people and His Holiness the Dalai Lama, to the point one has to wonder if it is intentional or something else. Because the definition of insanity is doing the same thing over and over again, expecting a different result and given the CTA has spent 60 years antagonizing the Chinese, and has no results to show for it, perhaps it is finally time they try a friendlier approach to Beijing before it is too late.

The below screenshots display the calendar and schedule that was planned for the #thankyouindia2018 event in Delhi which were later removed due to the changing of venue.

The Thank You India 2018 page on the Central Tibetan Administration’s official website, which has since been removed. Source: http://tibet.net/thankyouindia2018/. Click to enlarge. News from the Central Tibetan Administration’s official website, announcing the calendar of events for the Thank You India campaign. Source: http://tibet.net/2018/01/cta-announces-calendar-of-events-to-observe-thank-you-india-2018/ Click to enlarge 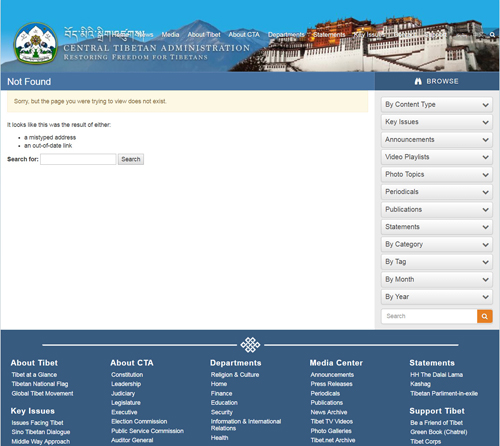 At the time of writing, the Thank You India 2018 page on the Central Tibetan Administration’s website has been removed. Source: http://tibet.net/thankyouindia2018//. Click to enlarge

THE HINDU: Government’s discomfort was ‘conveyed’ to Tibetan leadership on Dalai Lama events in Delhi

SCROLL.IN: Tibetan administration calls off one Dalai Lama event in Delhi, shifts another to Dharamsala 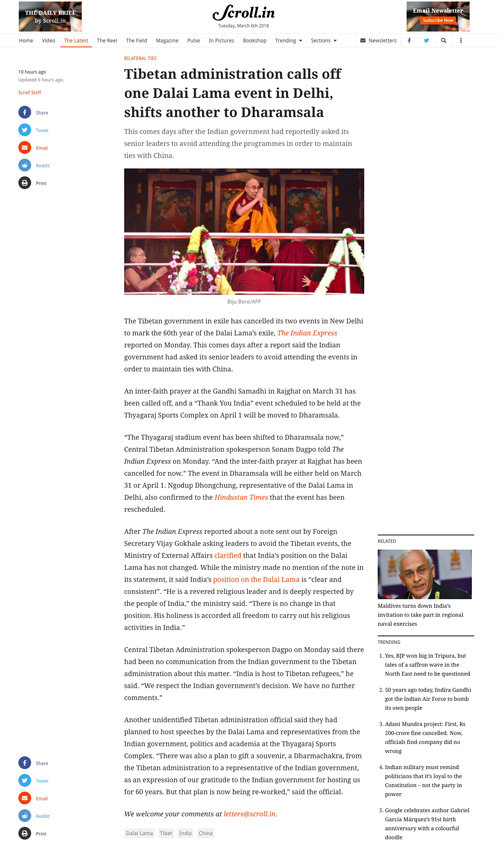 Addendum: Dalai Lama snubs Indian leaders as he is perhaps upset they snubbed him

Following on with the story that Indian officials asked the Central Tibetan Administration to move their celebrations away from Delhi, the Dalai Lama is reported to be be upset that the incident took place. In return, he has rejected attending an event which the President of India, Narendra Modi will be attending, showing his dissatisfaction. 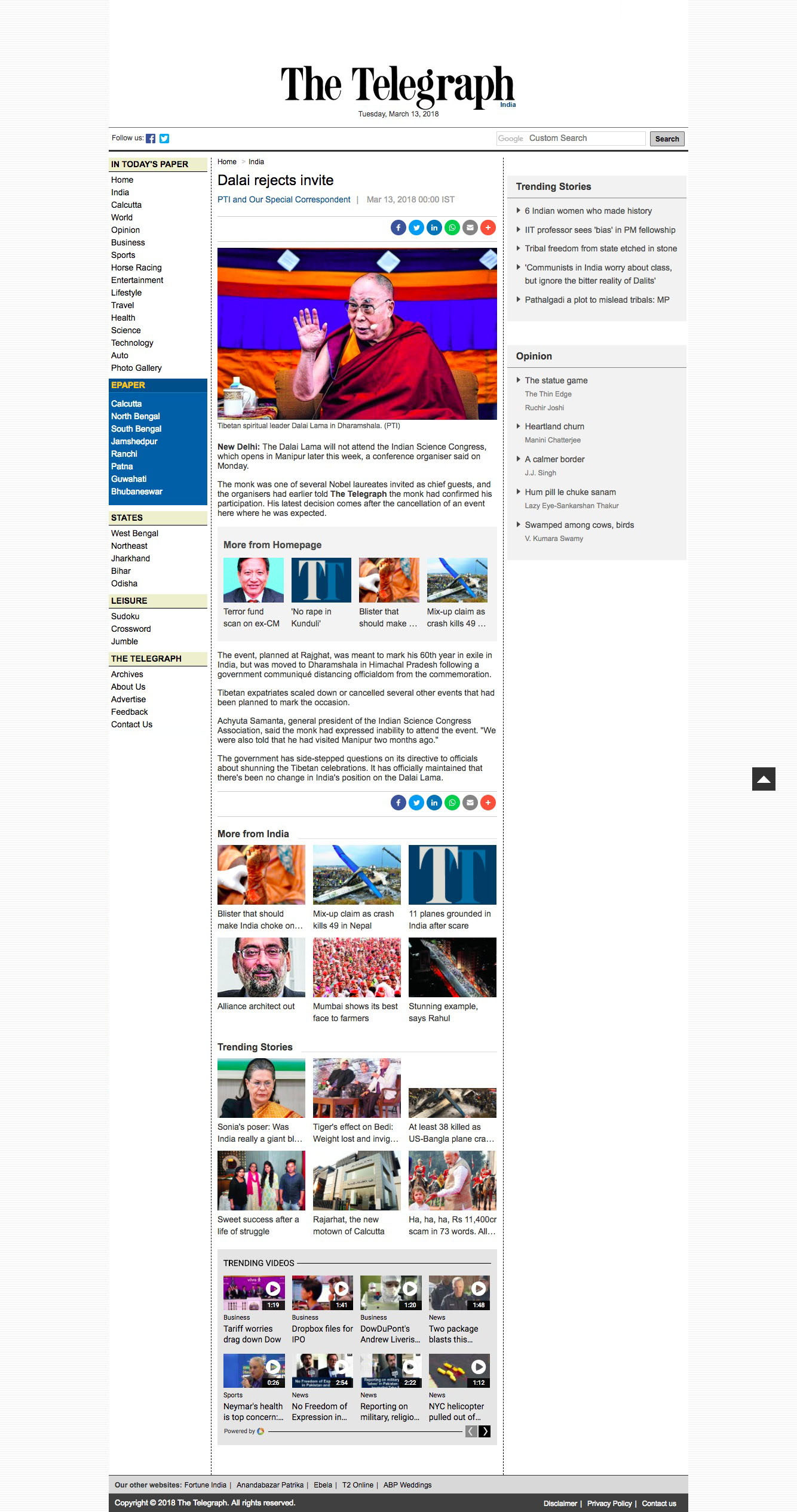 Indian minister Kishan Kapoor did not turn up to an official Tibetan function to commemorate the 59th anniversary of the Tibetan National Uprising Day. As a Member of the Legislative Assembly for the Dharamsala constituency and State Minister for Food and Civil Supplies, Kishan Kapoor was originally announced as the Chief Guest for the event. In light of recent events, with the leak of an official Indian government memo directing ministers and officials not to attend Tibetan-related activities, it is clear that Kishan Kapoor was towing the line.

Following the cancelation of “Thank You India” events in Delhi and the banning of the Tibetan Uprising Day rallies in the India’s capital, it is clear that the Indian government think attending such events may harm Sino-Indian ties. Kishan Kapoor’s absence is a clear indication that the Indian government is now placing more importance on pleasing China than worrying about Tibetan sentiments. After all, it is in global interest that India and China mend their relationship. No one wants to see another Doklam standoff. 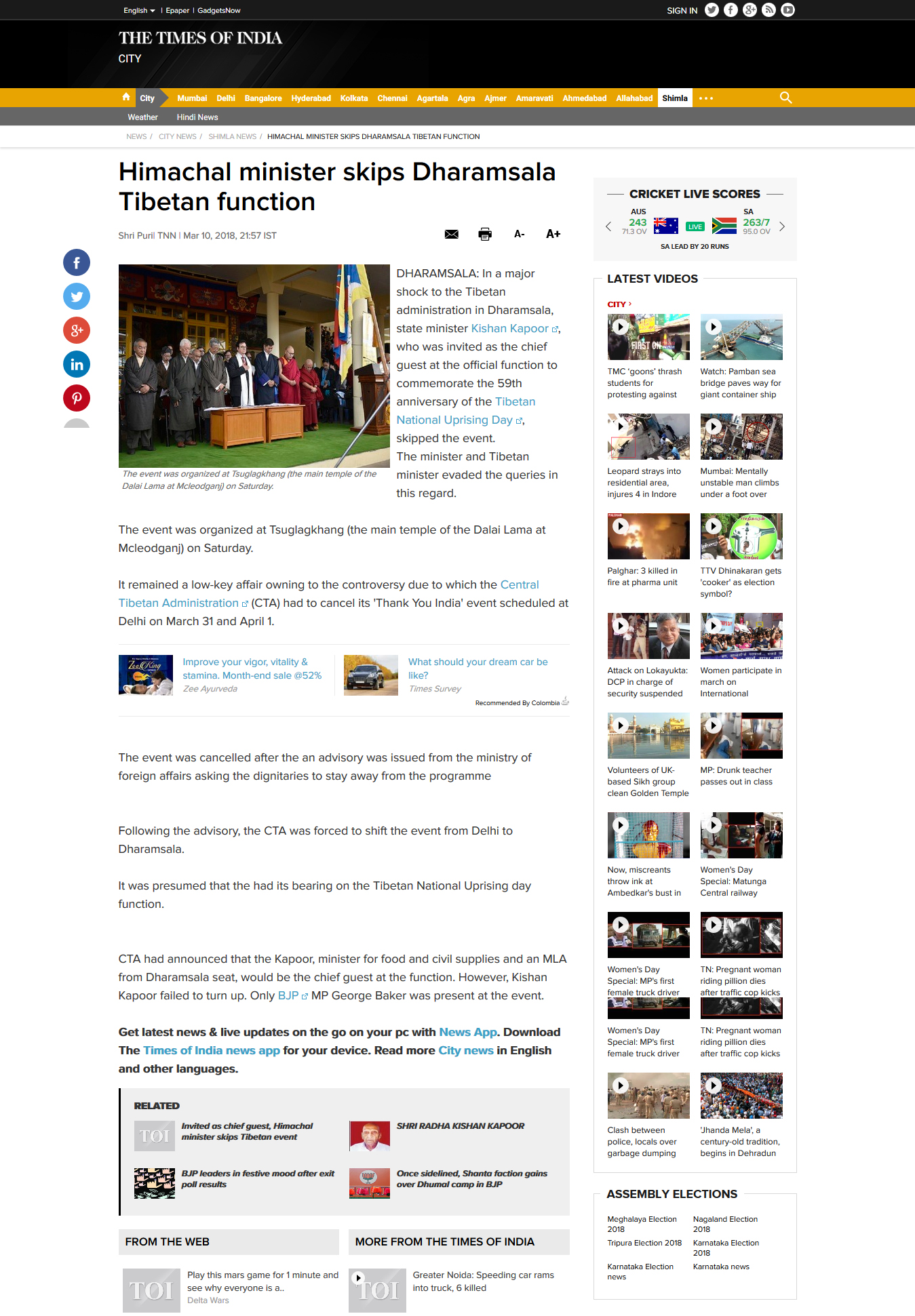 Addendum: Not Delhi or Dharamsala stadium, but a temple compound

After Indian ministers refused to attend the “Thank You India” events organised by the Central Tibetan Administration (CTA), officials have even asked the Tibetan leadership to move the event to Dharamsala instead of Delhi. The Indian officials did not want to jeopardize improving relations with China. Unfortunately, the venue of the event was re-located to a temple compound in Dharamsala, rather than a stadium. These incidents are clear signs that India is starting to abandon the Tibetans to get on China’s good side. Any country would do the same when it comes to the welfare of its citizens. This is even more so for India, because the Tibetans have never repaid India’s kindness. It does not make sense for India to continue to protect the Tibetans and jeopardize India-China relations. 1.3 billion Indians are definitely more important than a handful of Tibetans. 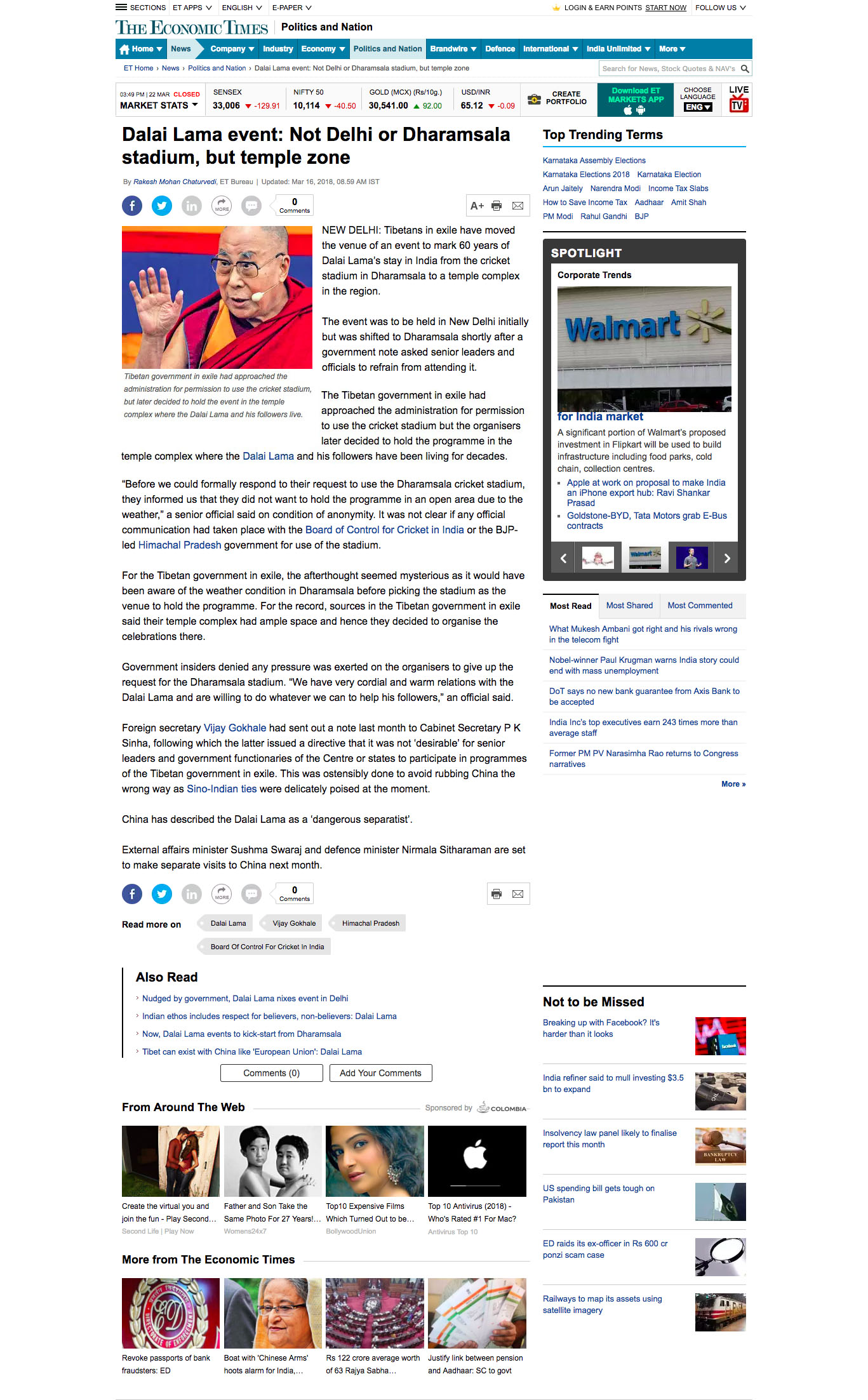 Himachal Pradesh Minister is a no show for Tibetan government event