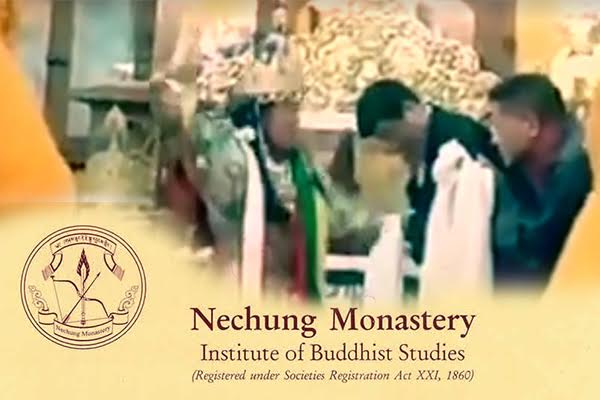 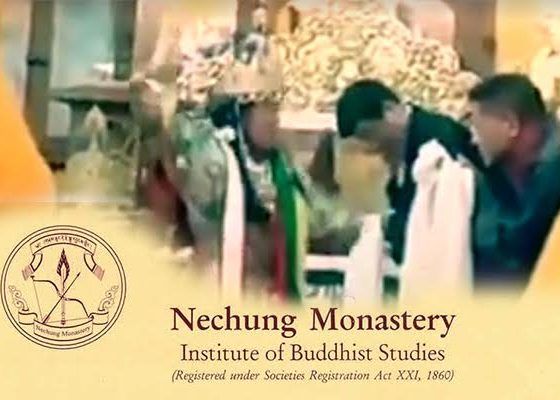 Top image caption: Not one but BOTH the Tibetan Government’s State Oracles recently rebuked and violently chastised the Tibetan Prime Minister and Speaker of the Tibetan Parliament in a very public and highly embarrassing manner

This latest embarrassing episode to go down in the leadership’s annals follows the release of a short clip making it clear that Tsering Chenga was distinctively upset with the Tibetan leaders. Taking trance in the Nechung Monastery in Dharamsala, she publicly chastised both Sikyong Lobsang Sangay (Prime Minister) and Penpa Tsering (Speaker of the Tibetan Parliament in Exile) together with other members of the Central Tibetan Administration (CTA) for their lack of integrity, disharmonious behaviour and corruption during the recent electoral campaigns and for their overall method of governance. Penpa Tsering, for example, has a history of criticising high lamas and teachers, and of making derogatory comments about them for political purposes. Because it is in vogue to criticise certain teachers, Penpa Tsering denigrates these masters in order to pander to certain sectors of Tibetan society so that he can gain popularity points with them. 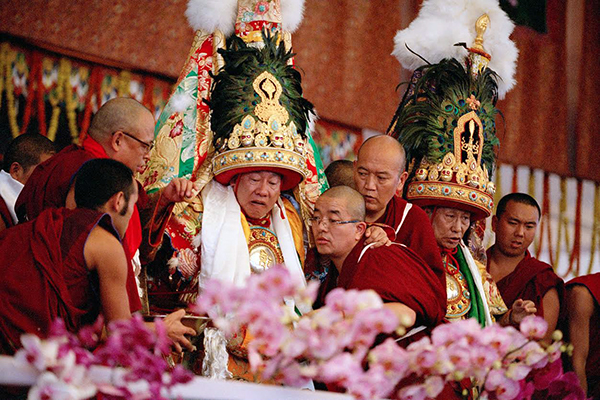 After the emergence of a video where Tsering Chenga berates Lobsang Sangye and Penpa Tsering, this time it is Nechung’s turn to chastise the two leaders for their behaviour

Thus, you should personally approach to His Holiness to regretfully apologized for all the mistakes and promise not to repeat again.

As I predicted earlier, Happy days for Tibet will come in his life time of my beloved Guru His Holiness. There is no better option other than Umay Lam [Middle Way Approach] for this to achieve. Therefore, irresponsible talking in the society will have more harm than help and you all should be UNITE.

There is great interest in this event among ordinary refugee Tibetans who have lived under the yoke of the Tibetan leadership for over 60 years because it seems that the leadership’s own gods are finally turning against them. For example, a Facebook post on an ordinary Tibetan’s page about this event has been shared 779 times. This person is just an ordinary citizen but the number of times their post has been shared reflects a huge interest in the oracles’ upset over the politicians’ behaviour.

Thus with the video of Tsering Chenga’s violent chastising and with Nechung’s letter, one can clearly see the State Protectors’ disapproval for the disgraceful behaviour of both Lobsang Sangye and Penpa Tsering during the election. Manifesting wrathful manner through the State Oracle, Nechung scolded both politicians for their general and overall corrupt behaviour, and their unbecoming actions that showed little consideration for His Holiness the Dalai Lama’s poor health that required him to undergo treatment in the Mayo Clinic during the time of the elections.

Both politicians were obviously taking advantage of His Holiness’ absence from Dharamsala for their own benefit. These corrupted officials of the Tibetan leadership have made it a habit of using religion, His Holiness the Dalai Lama, tulkus, monasteries, Dorje Shugden and regionalism for their own personal gains. What do they get from this? Money and power. So it is strange and hypocritical that they should accuse Dorje Shugden practitioners of taking money from the Chinese leadership, when they themselves take money from other governments to fulfil their own selfish wishes, at the cost of the Tibetan people’s welfare. They carry out the same practices that they accuse others of, so what gives them the authority to direct accusations against anyone?

This Facebook post of Tsering Chenga rebuking Lobsang Sangye and Penpa Tsering, together with the translation of the Nechung Oracle decree has been shared over 700 times. Scroll down to read all three pages of the letter, as well as the comments accompanying this Facebook posting

Unfortunately for the Tibetan leadership who have suppressed their people for too long, the circulation of the video and letter shows no signs of slowing down. These recent events have empowered Tibetans to speak up and make sure their varied voices and opinions are heard. This is something previously unthinkable in Tibetan society. Comments on social media range from snide remarks at the continued use of oracles for political matters (for example – “Abhay Oracles Saheeb. What should I have for dinner? Momo or Thukpa?”) to the minority still in favour of oracles (for example “Hey everyone don’t say things about the oracles and deities of Tibet. They are the guardians of our Tibetan Buddhism and they only mean well and protector of his holiness…”).

Politically, however, these comments show there is public consensus regarding the disgraceful electoral process – almost everyone is in agreement that the Tibetan leadership is corrupt, starting with Sonam Choephel Shosur (Chief of the Election Commission) who acted highly improperly by changing the rules of the election after the preliminary ballots to ban Lukar Jam Atsok from the second round.

One by one, those formerly loyal to the Tibetan leadership are speaking up against the behaviour of their leaders. Their manipulations and exploitation of the people has not gone unnoticed by either the gods or men. For the men, they are expressing their displeasure and frustration with increasingly descriptive and insulting remarks. And now the gods have spoken too and it has been caught for all the world to see.

Who will the Tibetan leadership run to when they no longer have His Holiness the Dalai Lama and the gods to hide behind? One by one, Dharamsala’s allies fall by the wayside as their sixty years of hypocrisy, greed, embezzlement and exploitations of their people catch up with them. Proof? They have not secured independence, autonomy or any leeway for the six million Tibetans in Tibet in their talks with the Chinese. If the current political situation continues, what the gods and the disenchanted Tibetan people will do next…only heaven knows. Can such a corrupt government who promotes schism, factionalism and untruths be trusted about the ban against Dorje Shugden? It leads us to believe that everything they say about Dorje Shugden is a lie and for political gain.

Below is just a sample of the current wave of interest by the Tibetan people in this latest development where even the Tibetan leadership have lost the respect of their own, state-approved, ‘clean’ and non-controversial gods.

This is the letter and decree by the Nechung Oracle currently circulating on WeChat and other social media platforms. 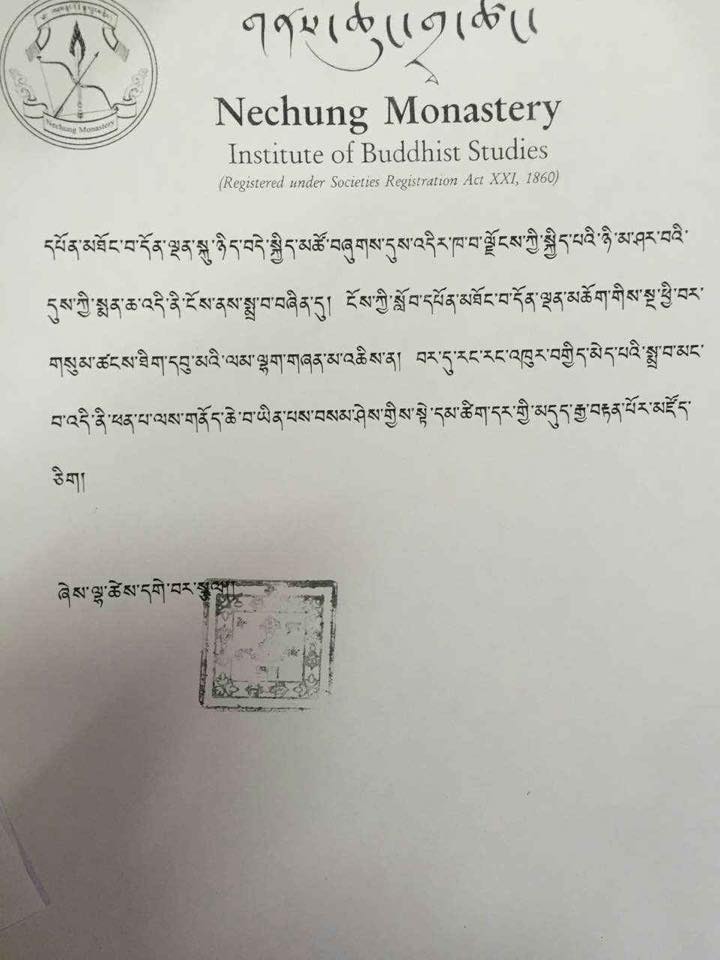 This was the posting that was repeatedly sent to us by various Tibetans who want to make it known to the world how the Tibetan leaders are failing their people, and that even the State Protectors recognise this and are losing their patience. Thanks to WeChat and other social media platforms, the video of Tsering Chenga berating Sikyong Lobsang Sangye and Speaker Penpa Tsering has been shared all over the Tibetan world. In this particular posting, the video is accompanied by the letter from the Nechung Oracle chastising the two leaders. Notice that this Facebook post has been SHARED 779 times (at the time of publishing).

The news regarding Tsering Changa’s rebuking Lobsang Sangye and Penpa Tsering was also shared on the New Yak Times Facebook page. Although the New Yak Times is relatively satirical in nature, the Nechung letter is very much real as are the comments made by the Tibetans about the oracles. Just look the remarks they make, which would have been unthinkable in the past when the oracles were held in extremely high regard. In fact, even a Facebook page like the New Yak Times, which pokes fun at the Tibetan leadership, would have been unthinkable just ten years ago. The Tibetans are clearly frustrated with their leadership who despite claiming to be democratic, continue to rely on oracles to divine their future.

What other democratic nation in the world consults oracles and relies on them to make state decisions? Are the Tibetan leaders so ineffectual and indecisive, and so fearful of being held accountable for their decisions that they will not decide for themselves and need to rely on the gods? Religion is a personal matter and should not be used to influence state matters. There are, for example, Tibetan Bonpos and Muslims who fall under the purview of the Tibetan leadership. They do not share any beliefs with the Buddhists in their society so why are decisions regarding their welfare being made by a Buddhist protectoress who has nothing to do with their religion? So it is one thing to seek the blessings of the gods, and quite another thing to leave matters of national importance to them.

The video of Tsering Chenga violently chastising Sikyong Lobsang Sangay and Speaker of the Tibetan Parliament in Exile Penpa Tsering has gone all over the Tibetan world. See here the comments the Tibetans make about her reaction to the two leaders, laughing at the Protector Goddesses’ reaction towards them (ཧ being the Tibetan character used to express “ha” in this case).

A Geshe Topgyal posted the Tsering Chenga video to Facebook, attributing Tsering Chenga’s behaviour and treatment of the two leaders to recent “immoral” behaviour during the Sikyong Elections.

See what else he says about the two leaders’ behaviour. This Geshe states that the oracle has never previously shown so much upset and anger in public which is true. In the past, whatever decisions the Tibetan leadership made always received the support of the government’s oracles and deities. Penpa Tsering for example, even being an alleged murderer, has never suffered such a public berating for his behaviour. The behaviour of the two leaders has become so inexcusable and intolerable that the Tibetan leadership’s own gods are turning against them. As a direct result of the rebuke they received from the State Oracles, the Minister of Security for the Tibetan Government in Exile resigned from his post. This makes him the second Minister to resign from the Cabinet in a matter of months. Is this a government you can trust, when members of the Cabinet quit from their posts at the drop of a hat? First, Penpa Tsering stormed out of a Parliament session like a petulant child when he was accused of murder. Next, Dicki Chhoyang resigned so she could speak freely about the Sikyong elections. And now, Dongchung Ngodup quits too.

Dongchung Ngodup says he quit due partly due to berating the government received from the State Oracles. Does this mean they agree with what the State Oracles said about them, that they have been ineffectual? Is this their way of saying that they lack confidence in Sikyong Lobsang Sangye’s leadership and instead of seeing out their tenure, they would rather quit? What is going on behind the scenes in the Tibetan leadership that is resulting in leading government officials resigning from their positions? 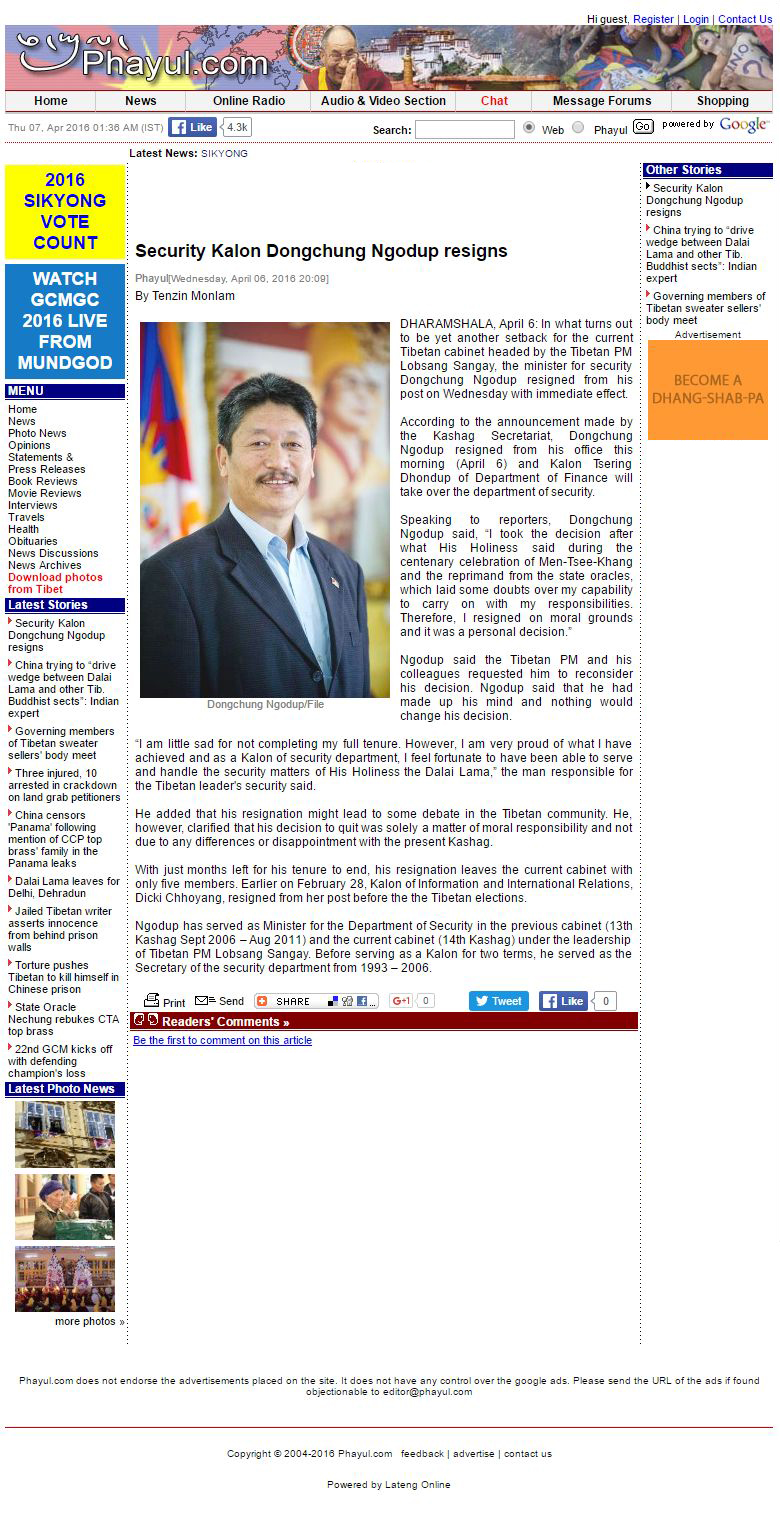 A Dalai Lama Insider Returns to China – Has the Defection Begun?