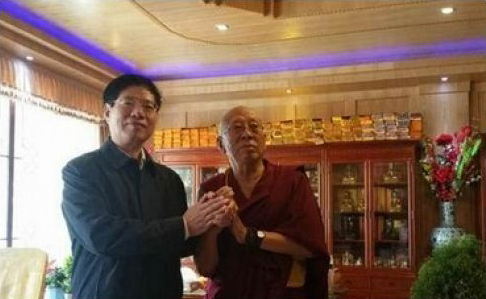 In 1959, the Tibetans were exiled from Tibet. Given asylum by India for the next 100 years, the Tibetans re-established themselves as refugees in South India. Although life as refugees was full of hardship, they endured all, hoping that that they may one day return to their home in Tibet; a task which H.H. the 14th Dalai Lama and his government appeared to place great importance on, but with no results to show so far.

Fast forward 56 years later, two generations of Tibetans have lived out of Tibet. The Dalai Lama and the Central Tibetan Administration (CTA) is no closer to bringing their people back to Tibet than they were half a decade ago, despite going as far as demoting the Tibetan Government in Exile (TGIE) to CTA in order to entice China to be more accepting of their Middle Way stance.

Many Tibetans realized this reality and have migrated to richer Western countries to have a brighter future than what was being offered by the CTA. Although outwardly, Tibetans starting a new life abroad is not a big deal, but behind closed doors, it is a known fact that the CTA heavily discourage Tibetans from receiving naturalized citizenships from foreign countries, as they desperately try to claim each and every exiled Tibetan for their own benefit and power.

With these factors in mind, it seems astonishing to hear news that Amchok Rinpoche, an ex-abbot of Gaden Shartse Monastery, one of the biographers for H.H. the 14th Dalai Lama who also compiles the teachings of the Dalai Lama, and an ex-member of the Dalai Lama’s private office, has defected to China’s Tibet. His Holiness the Dalai Lama with his former personal biographer and confidant, Amchok Rinpoche (right). Notice Amchok Rinpoche who, in a traditional gesture of devotion, remains bowed, keeps his head lower than the Dalai Lama’s and holds his hand in a way that implies he supports the Dalai Lama. So is his move to China a genuine defection or are there other underlying reasons?

Could it be that Amchok Rinpoche have lost hope for the Dalai Lama and the CTA that he decided to return to China’s Tibet, the sworn enemy of the CTA; despite the risks of being scorned and branded a traitor to the Tibetan cause by the Tibetan public and authorities?

It is common to see people who are not favoured by the pro-Dalai Lama’s group, such as the Dorje Shugden practitioners, being put down and accused of selling themselves out to the Chinese. These people are ostracised within the Tibetan community, often due to false allegations by the CTA and more often than never have been brought to the media’s attention for defamation and shame. Yet, here what we witness today happens to be one of Dalai Lama’s close confidants. More people are leaving the Tibetan settlements in India as they see no hope. Are they truly loyal to the Dalai Lama when they leave India to live comfortable lives in Western countries, instead of trying to remain as close to their leader as possible? In fact, this second Tibetan diaspora from India to other countries also sees many Tibetans returning to Tibet, China. However their moves remain unreported as they are not high profile like Amchok Rinpoche.

Supposing some people give Amchok Rinpoche the benefit of the doubt, and claim that this story is nothing but Chinese propaganda stirred by China in order to paint a bad picture of the CTA, and that China is being generous by accepting exiled Tibetans back into China. However, it is incredibly difficult to believe that Amchok Rinpoche would put himself in a position to be used for propaganda, unless done intentionally, especially since this is not Amchok Rinpoche’s first time visiting China.

The fact it is not Amchok Rinpoche’s first time visiting China highlights a number of hypocrisies on the CTA’s part. Their silence regarding the Dalai Lama’s personal biographer making repeated visits to China over many years, and befriending Chinese officials on a personal level is in stark contrast to their vocal criticism of Shugden lamas who are pictured with Chinese officials. It is clear that if anyone does not share the same opinion as the CTA, they are branded as traitors and accused of being anti-Dalai Lama. However, the same action becomes perfectly acceptable if it furthers the CTA’s own interests.

How effectively the CTA functions as a governing body is debatable. It is evident that in the last 60 years in exile, the CTA has achieved nothing close to getting independence. The CTA’s influence has seen a huge decline, especially since they have not been able to convince the Tibetans to unite. Seeing how the CTA has failed to meet with its objective and even those who are pro-Dalai Lama are going against their policies, like Amchok Rinpoche who took things in his own hands. Now it seems Amchok Rinpoche is the one getting Chinese government aide and finances.

The inconsistency in the CTA has brought itself to the doorstep of its own downfall. On one hand they persecute Shugden Lamas who they claim have been receiving money from the Chinese despite having zero evidence to back up that claim; yet when it comes to those who are working closely with them, similar issues are swept under the carpet and hoped that people do not talk about it again. It is through such poor governance that members of their own parliament can get away with murder, and embezzlement, or even defect back to China’s Tibet, an act that Tibetans consider as a huge disgrace and betrayal towards the Dalai Lama.

Similarly with the persecution of Shugden Buddhists, we can see how biased and senseless the CTA has been in clamping down the freedom of Shugden practitioners when everything they accused Shugden practitioners have committed, the same or worst is being done in their own backyard. As to how the CTA is going to react with Amchok Rinpoche’s move, it sure opens up the possibility for the Shugden ban to be eliminated soon. Amchok Rinpoche one of the close people to the Dalai Lama has defected back to China and proudly says now he is a Chinese citizen.

In this biography of Amchok Rinpoche, it states clearly that he is the former abbot of Gaden Shartse Monastery, and was the biographer of His Holiness the Dalai Lama. The news of Amchok Rinpoche’s defection is now being publicised on Chinese media. 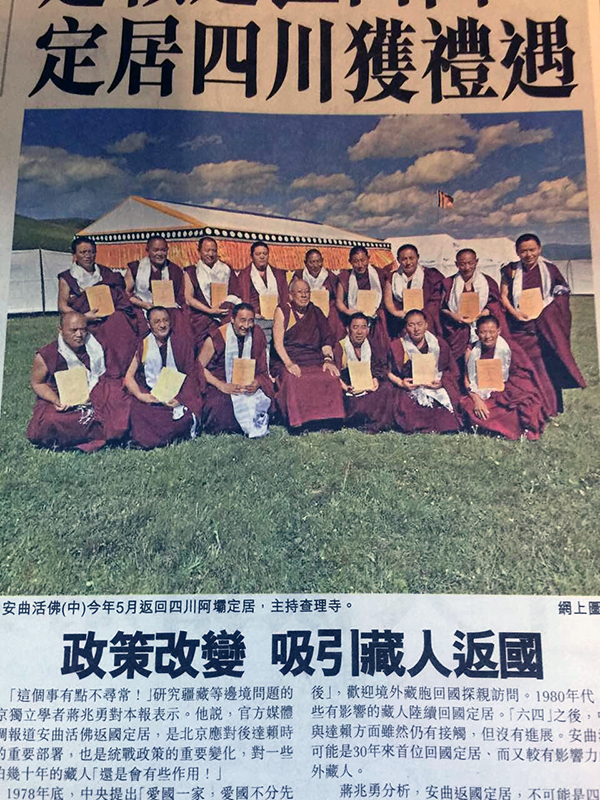 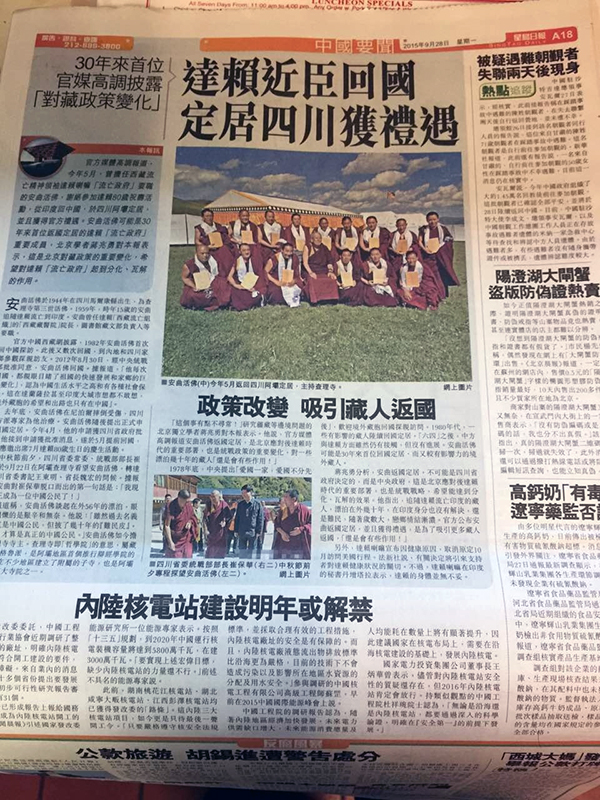 Official media widely reported that in May this year, Achok Rinpoche who has served key positions in the exiled Tibetan Spiritual Leader the Dalai Lama’s “Government In Exile”, declined to participate in the Dalai Lama’s 80-year-old birthday celebrations, returning from India to China, to settle in Aba Sichuan, and receiving mark of courtesy from the government. Achok Rinpoche could be the first important member of the Dalai Lama “government in exile” to return home in 30 years. Beijing’s scholar, Jiang Zhaoyong told this newspaper that “this is an important change in Beijing’s policy on Tibet, and I hope this will play a role in dividing and splitting up Dalai Lama’s “government in exile”.

The official China Tibet website reported that Achok Rinpoche first visited China in 1982. Since then, he has returned to the mainland several times to visit relatives and friends in his hometown in Sichuan. On August 30th 2012, receiving approval from the Central United Front Work Department, Achok Rinpoche came home. According to reports, “every time he returned home, he witnessed tremendous changes in the rapid development of the motherland and his hometown,” he also thinks that the Chinese high standard of living and a variety of social security are such that even those living in Dharamsala or in the big Indian cities do not dare to dream about, and “the only hope and way out for overseas Tibetans is only in China.”

It was reported that when Achok Rinpoche spoke about his wandering life of 56 years, his eyes had flashes of hardship and helplessness. He said, “While in the past I have been a Chinese citizen in name, but I was wearing the coat of ‘refugee’ for decades. Today, I am considered a real Chinese citizen.” Achok Rinpoche is the current abbot of Tsanney Gompa.

Middle column (under the main headline):

“This is a bit unusual!” said Jiang Zhaoyong, a independent Beijing researcher on Mongolian, Tibetan and other ethnic issues, who said that extensive reporting of the return of Achok Rinpoche reflects Beijing’s preparation to deal with the post-Dalai Lama era. This also shows the important policy change of the United Front and that this “will have some effects” on Tibetans who have been wandering for decades.

By the end of 1978, the central government promoted “All patriots belong to one big family, whether they rally to the common cause early or late”, welcoming visits by overseas Tibetan compatriots to return home for visits. In the 1980s, some influential Tibetans have continued to return to settle in China. After the Tiananmen Square Protests, although China is still in contact with the Dalai Lama, there has not been any progress. Achok Rinpoche may well be the first influential overseas Tibetan to return home in 30 years.

Jiang Zhaoyong also said that Achok Rinpoche’s repatriation could not have been determined by the Sichuan Provincial Government alone. It was the decision of the Central Government, and it is an important preparation by Beijing to deal with the post-Dalai Lama era, as well as United Front’s strategy in hopes to divide and split up the Dalai Lama’s “government in exile” in India. He also mentioned that the Tibetans who exiled together with the Dalai Lama have been wandering for decades, and that their Indian identity issue has not been resolved. They are still refugees and as they age, the longing to return to homeland gets stronger. The official announcements of the repatriation of Achok Rinpoche and of him receiving the mark of courtesy from the local government, “will have some effects!” to attract more Tibetans to repatriate.

Half A Century Of Wasted Aid – What The CTA Hides