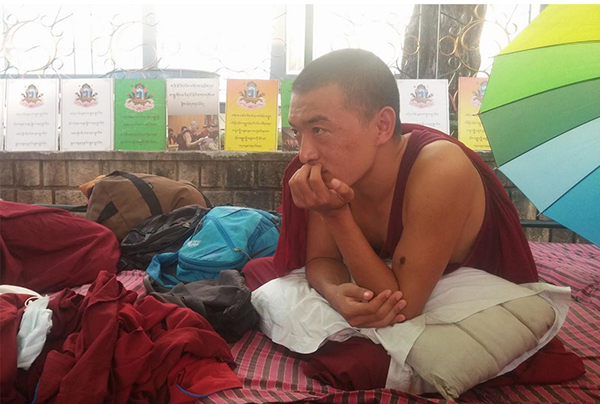 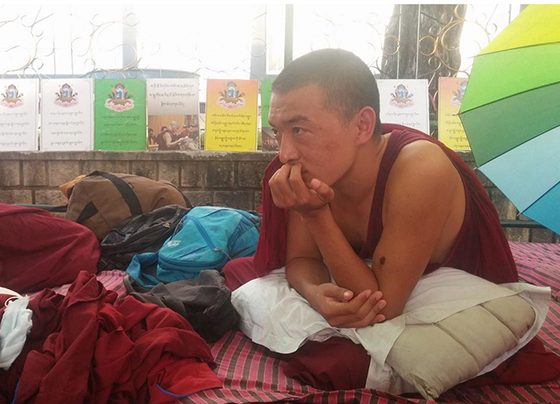 Top image caption: One of the nine hunger strikers of the followers of the Jonang sect. They are outside the CTA’s (Tibetan Parliament) office in Dharamsala demanding for the discrimination against their sect to end. The CTA or Tibetan Government-in-Exile are well known for their corrupt and unjust ways of handling their people. The same discrimination is targeted against Dorje Shugden followers. The Jonang sect was banned in Tibet by the 5th Dalai Lama for over 400 years until recently. Now they want representatives in the Tibetan Parliament which is not allowed to them.

In September 2011, His Holiness the Dalai Lama officially recognized the Jonangpa school as one of the major sects of Buddhism in Tibet after 400 years of persecution. The Dalai Lama also recognized the current and now deceased Khalkha Jetsun Dampa of Mongolia as the head of the Jonangpa sect. Therefore, being one of the main schools of Buddhism, it is logical that the Jonangpas would expect to have at least one representative of their faith in the Tibetan Parliament. This was rejected.

Being yet another group having to face the CTA’s discrimination along with Shugden followers, the Jonangpa representatives are therefore staging a protest in front of Tibetan Parliament’s building in Dharamsala and threatening a hunger strike. What an embarrassment to the CTA again. This shows how the CTA mismanages and mishandles all religious and secular affairs. Representing the Sakya sect is MP Gazi Tse Ringpo was manhandled and had many demands in paper stuffed into his pockets as he was loud in his opposition of Jonangpas in Parliament. This led to a scuffle on September 19, 2015 bringing more unwanted attention to the unfair practices of the Tibetan leadership. More discrimination exposed by the CTA in Dharamsala except this one started to become violent.

Although the number of Jonang practitioners is small, their tradition has been recognized as one of the major schools of Buddhism. Being recognized as such, they should have equal representation in the Parliament if Dharamsala were truly a democratic administration (as they claim). However, the mechanisms of the CTA are always unfair, undemocratic and corrupt. For them to reject the Jonangpas’ demand for a seat in Parliament clearly shows their undemocratic method of doing things only for self-gain. It also highlights the sectarian nature of the Tibetan administration and their political processes, where the monks chosen to represent the Sakyas and Kagyus in Parliament rejected the Jonangpa’s request to be represented.

The Dalai Lama’s recognition of the Jonangpas as a major school of Tibetan Buddhism is significant because of the actions of his predecessor. During the time of the 5th Dalai Lama, the Jonangpas were forcibly converted to the Gelug school of Buddhism. As a result they were nearly wiped out, and they withdrew to small pockets of practice in certain parts of Tibet that became their strongholds. They were considered an extinct sect of Buddhism until recently, in the 19th century, when they resurfaced and practiced in secret still. This culminated in them being recognized as an official sect of Buddhism by His Holiness the Dalai Lama in 2011 finally four hundred years later. 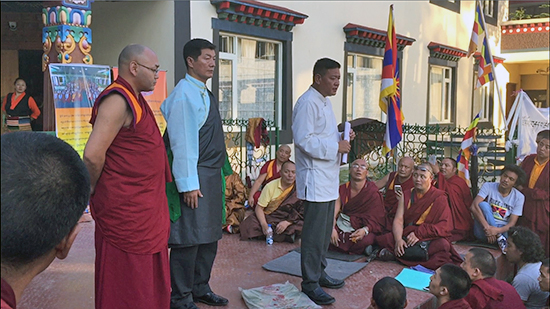 But religious issues aside, Jonangpa as a recognized sect of Tibetan Buddhism should have fair representation in the Tibetan Parliament-in-Exile. Whether their religious views and philosophical tenets are valid or not valid, is not the question. The question here is religious freedom and the freedom to practice whatever religion you like, without being discriminated against in a political or social environment, as per the Tibetan constitution:

Charter of the Tibetans in Exile
Article 10. All religious denominations are equal before the law. Every Tibetan shall have the right to freedom of thought, conscience and religion. These religious rights include the freedom to manifest one’s beliefs, to receive initiation into religious traditions, and to practice with matters relating to religious commitment, such as preaching or worship of any religion, either alone or in community with others.

The Charter says that all Tibetans have the freedom of choice to pick any religion they want. Our question is how can they pick what religion they want if a certain religion is banned? Or if that religion is always spoken ill of? If Dorje Shugden practice is always spoken ill of, then how is that religious freedom when it makes people fear being identified as a practitioner? Whether Dorje Shugden’s practice is valid or not, it is followed by millions so therefore just like the Jonangpas, adherents of the Dorje Shugden faith must be represented within Parliament and not barred. 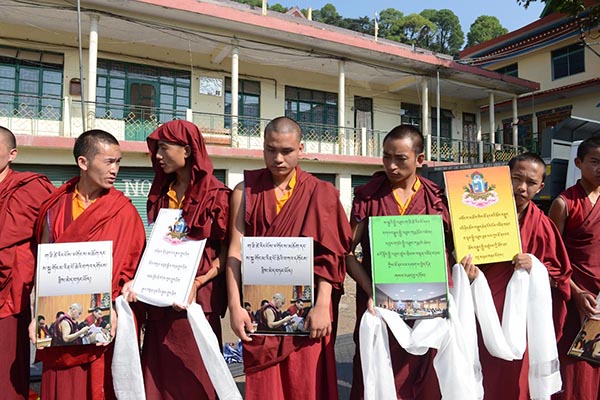 Monks following the Jonang tradition of Tibetan Buddhism protest in front of the Tibetan Parliament demanding their representation in the Parliament. This was taken on September 15, 2015.

Therefore like the Jonangpa school has been reestablished, the Dorje Shugden form of Buddhism should also be reestablished. The Tibetan government and Tibetan leadership, with immediate effect, should stop condemning this form of religious practice and give religious freedom.

It is the very least Dorje Shugden practitioners deserve after nearly two decades of suffering religious discrimination and intolerance, without reacting violently. The Tibetan government claims that Dorje Shugden people are violent but in the case of the Jonangpas, they were caught on video getting violent with Tibetan members of parliament. Why is it when Jonangpas are violent, they get what they want and their demands are fulfilled and yet, with Dorje Shugden practitioners, they have never attacked anyone (let alone a member of parliament!) and yet they do not get what they want? Dorje Shugden people have written letters to the Tibetan parliament, Dalai Lama and Samdhong Rinpoche numerous times with no reply. So the peaceful demonstrations continue worldwide. 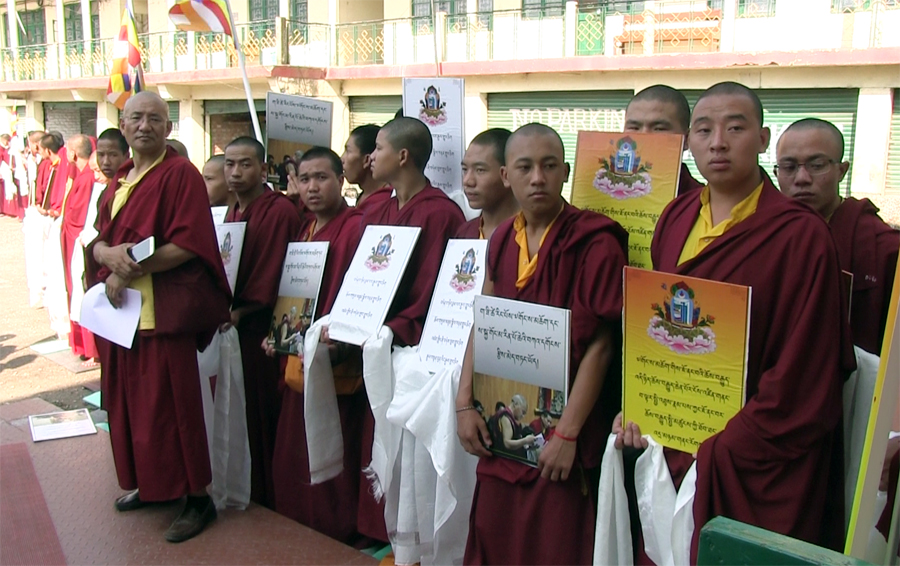 Jonang monks protesting in front of the Tibetan Parliament (Dharamsala) on September 15, 2015 for their right to representation

If the CTA and Tibetan leadership were truly democratic, they would extend the same treatment and equality to all members of Tibetan society, and give them equal representation in Parliament. After all, the Bönpos are not even Tibetan Buddhist and yet they receive fair representation in the Tibetan Parliament-in-Exile and are accepted as equals. Yet prior to 1987, they were stigmatized and marginalized. You can easily Google and research on how the Bönpos were marginalized and stigmatized prior to 1987 by the Dalai Lama, the CTA and Tibetans overall. When the Dalai Lama wanted unity, to serve the CTA’s purpose, he finally made a statement to stop the stigma against Bönpos. As a result, the stigma and hatred against the Bönpos stopped nearly overnight. Bönpos suffered for centuries from religious persecution from the Tibetan leadership as they were not Buddhist; after a statement from the Dalai Lama, this persecution stopped immediately. It should be the same now for the Dorje Shugden practitioners worldwide.

Prior to 2011, the Jonangpas faced the same marginalization until the Dalai Lama recognized them as separate. Dorje Shugden practitioners therefore demand and request the same equal representation, standing and respect as all other members of Tibetan society, in the same way the Bönpos and Jonangpas have received. The Dalai Lama should say the same for the Shugdenpas who, despite nearly 20 years of ill-treatment from Tibetans as a result of our faith, continue to oppose the ban peacefully, legally and with respect.

Click on the image to read Phayul’s report on this incident. (Source: http://www.phayul.com/news/article.aspx?id=36515)

Followers of Jonang tradition demonstrate at an earlier protest (on March 28, 2015) in front of the Tibetan Parliament, demanding that their sect be given representation in the Parliament. 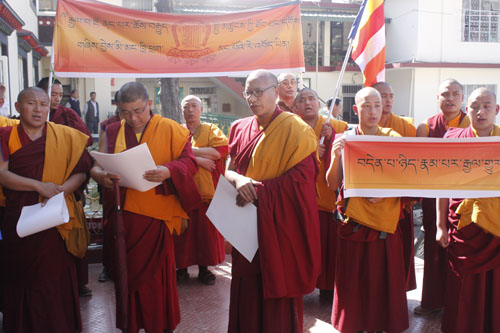 Jonangpas protesting in March 2015 for their right to representation in Parliament. 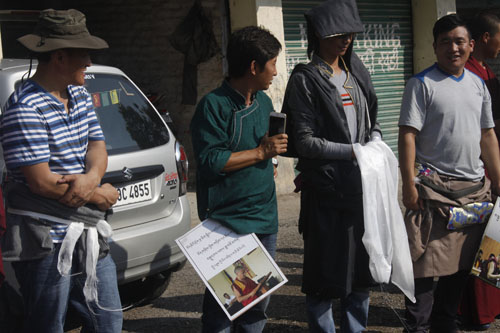 Lay Jonang practitioners protesting in September 2015, demanding their right to be represented in the Tibetan Parliament. 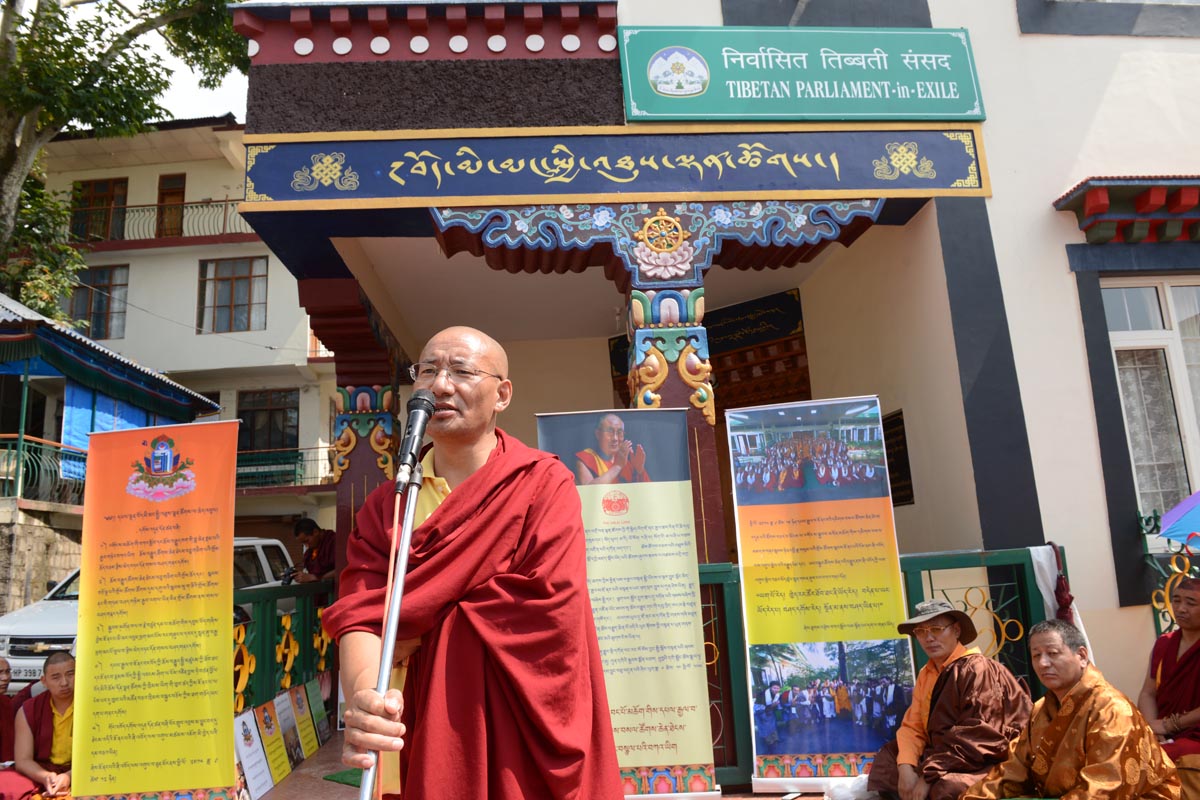 Ngawang Dorje, advisor of the Jonang Association, speaks outside the Tibetan Parliament as the 15th parliament began its 10th session on September 15, 2015 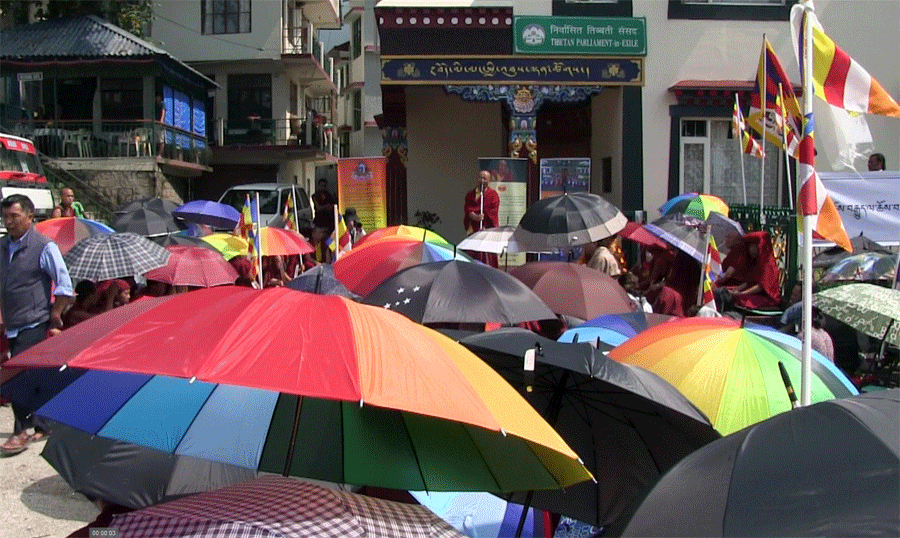 Jonangpas listen to Ngawang Dorje, the adviser of the Jonang Association, as he addresses their protest congregation on September 15, 2015