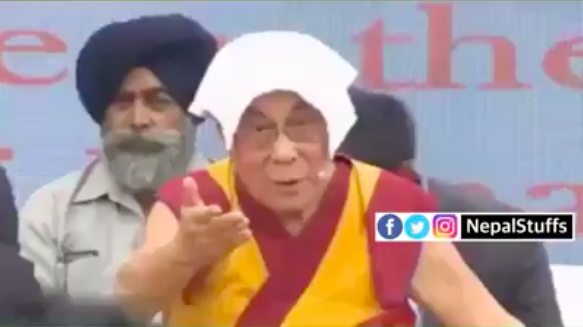 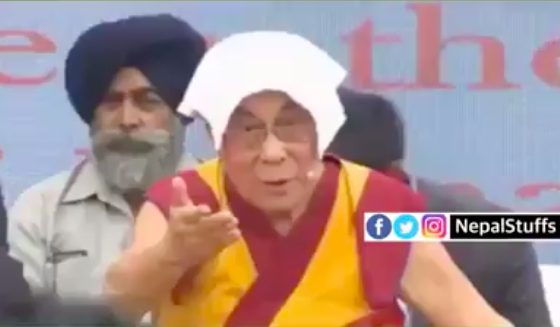 There are four places of pilgrimage that are considered a must-visit for all Buddhist practitioners of all traditions. One of these places is the Buddha’s birthplace in Lumbini in present-day Nepal. In 245 BC, Emperor Ashoka confirmed the location of Buddha’s birth by erecting a pillar with inscriptions attesting to this; today, this monument is a UNESCO World Heritage Site famously known as the Ashoka Pillar.

The Buddha’s birthplace being in Lumbini is something that the Nepali people are fiercely proud of. They celebrate Buddha Jayanti (the birth anniversary of the historic Buddha) on May 21st every year and it is a hallowed tradition regarded as sacred by this Himalayan nation. Thousands from all over the world fly to Lumbini to join in the festivities.

But all of this is mere nonsense according to the 14th Dalai Lama. In recently-released footage on Rajdhani TV, the Tibetan spiritual leader dismissed this historic fact in a manner that was very demeaning to Nepal. The dismissal was all the more galling considering Nepal has been very kind to the Tibetan people, having hosted a huge Tibetan refugee community for over 60 years.

This is a point the Dalai Lama appears to have missed or does not care too much about, and his statement is very disrespectful and harmful for a number of reasons: 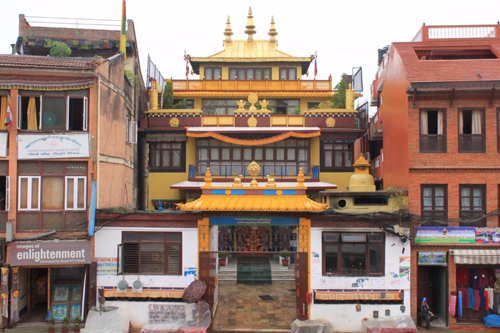 Since they first entered exile through the China-Nepal border in 1959, Tibetan refugees in Nepal have done extremely well for themselves. Amidst aging Nepali homes rise large golden-roofed temples which are as richly decorated inside as they are outside. After the 2015 earthquake in Nepal, the Tibetan temples were often the first to be rebuilt, thanks to donations from all over the world. Meanwhile the Nepali people continued to languish outdoors in the elements for months, before receiving more permanent shelter. It was also during this time that some of the Dalai Lama’s associates were found to have been raising money on the pretext of donating to earthquake victims, but keeping the money for themselves instead. 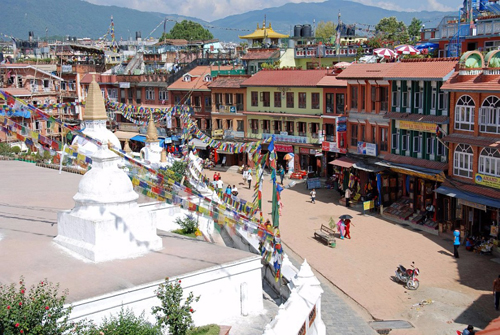 Some of the Tibetan shops surrounding the world-famous Boudhanath Stupa. Thousands of tourists visit this UNESCO World Heritage Site every day, and patronize the many wealthy Tibetan businesses there. Tensions have been rising in recent years against Tibetan refugees, who are accused of taking the best business spots and pricing out the local Nepalis.

The Nepali nation has every right to be upset. The Dalai Lama being an elder statesman and a senior religious figure synonymous with wisdom and kindness must be fully aware of the power of his words. He is one of the most visible personalities in the world and, rightly or wrongly, a trusted public figure. Everyone has seen how the Dalai Lama has destroyed centuries-old spiritual traditions like the Dorje Shugden practice by simply declaring it to be demon worship, without furnishing any proof or explanations. Now, the same disregard is shown to the Nepali people. 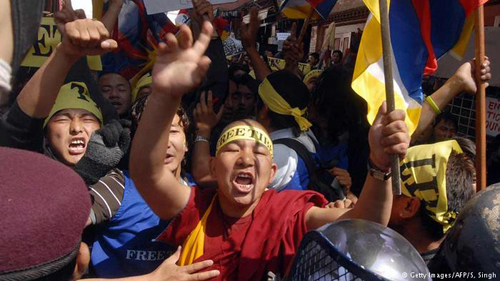 Every year, Tibetan refugees in Nepal launch protests against the Chinese government, forcing the Nepali police to allocate already-strained resources into policing them. These protests have a negative impact on Nepal’s relationship with China. Is this how Tibetan refugees show gratitude to their Nepali hosts, by adversely affecting their host country’s economy and relationship with other nations, and their ability to provide for their own local people?

It would behoove the Tibetan leadership to practice greater sensitivity towards the Nepalis in the future as the people are already very upset. Unlike the many other groups that the Tibetan leadership has insulted and maligned, there is much that the Nepali government can do in retaliation. For example, the CTA may now lose another one of their strong allies in the Himalayan region. China is already extending a hand of friendship to Nepal and now, due to the Dalai Lama’s statement, the Nepali government has just been reminded that cultivating a relationship with the Tibetans will not benefit their country or people. The only result will be more grief, insults and violence.

In contrast, a relationship with the Chinese will result in financial and trade benefits for the nation, as well as infrastructure improvements and economic growth. The CTA also fails to recall that the presence of Tibetan refugees in the country is totally reliant on the Nepali government’s continued patronage; without their support, the Tibetans could be asked to leave any day. How much longer can the CTA rely on the kindness of others, while they simultaneously insult and anger them? How much longer can the CTA survive in this way? At the rate they are going, the obvious answer is ‘not much longer’.

This is how the Nepalis are responding to the Dalai Lama’s statement that Buddha was born in India, and not Nepal. The Nepalis, as you can see, are extremely upset and are making their unhappiness known in official news channels as well as online on social media platforms. Videos of the Dalai Lama’s statement are also circulating and being shared widely. You can see below the numerous examples of the Nepalis’ reaction, and the strength of feeling that the normally peaceful people of this nation currently have against the Tibetan leadership and the Dalai Lama himself. 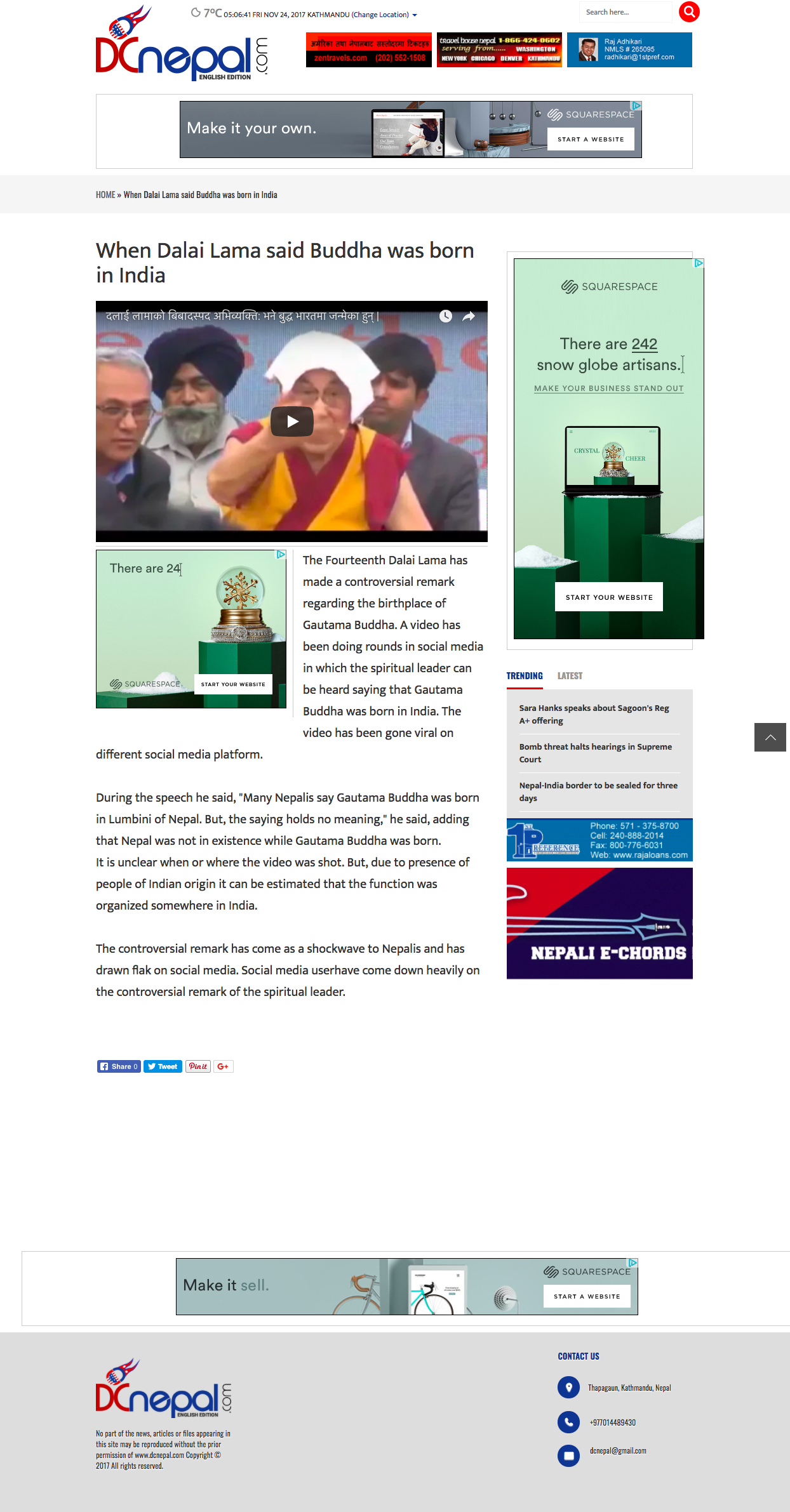 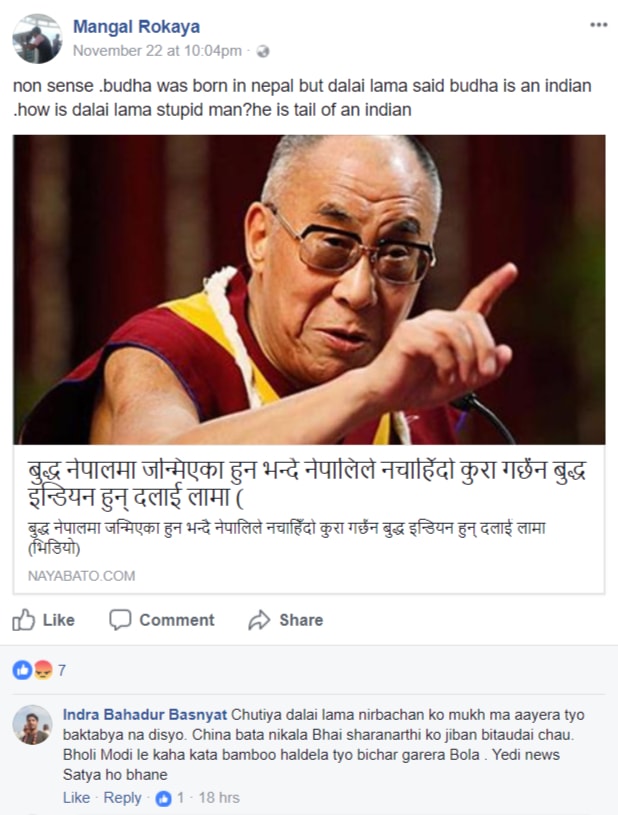 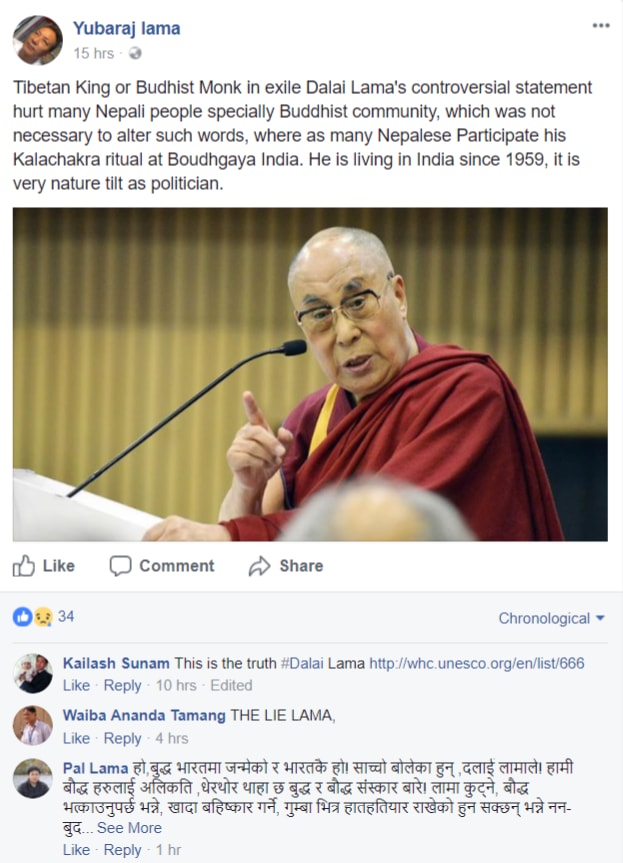 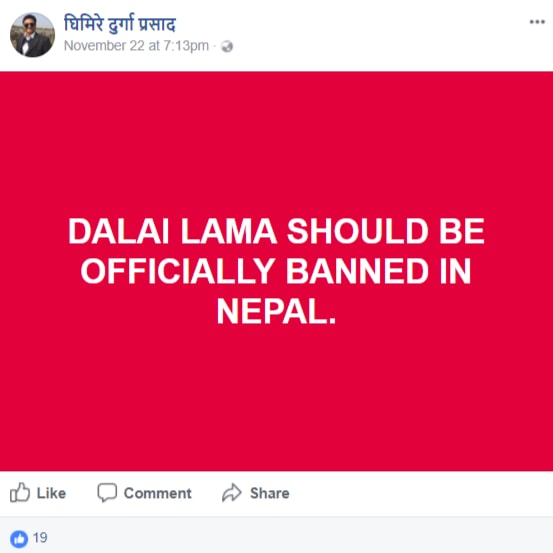