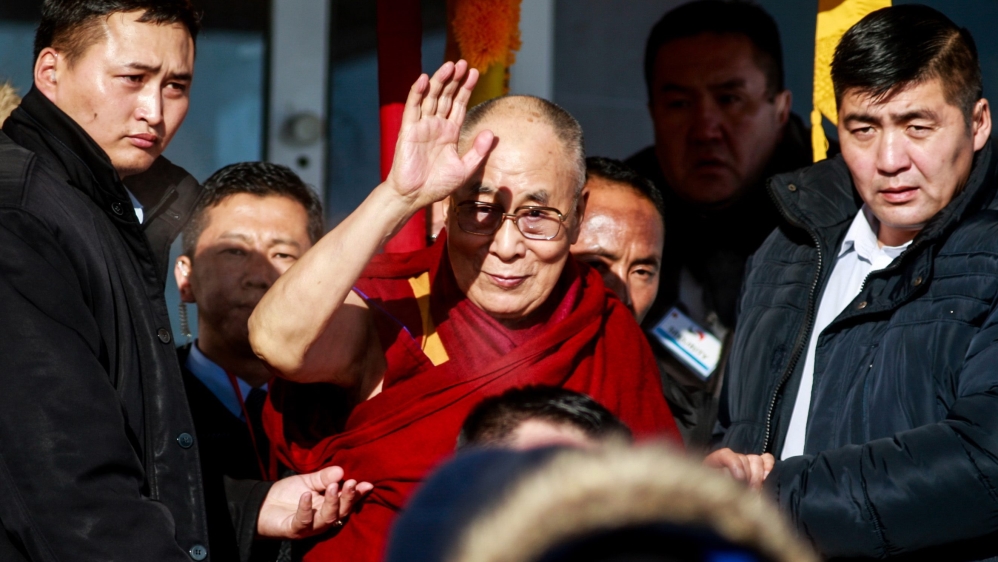 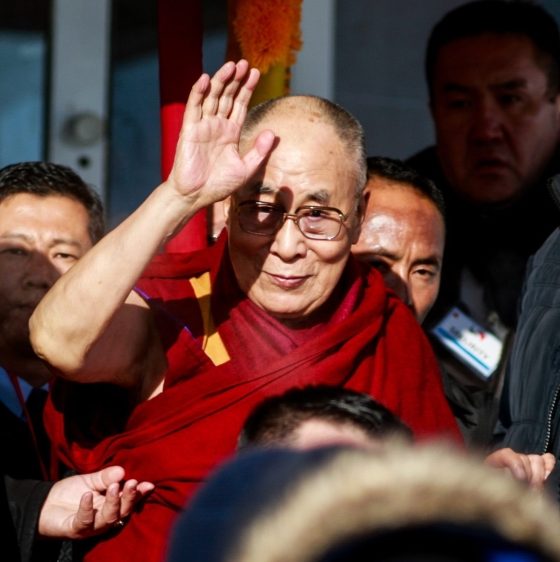 Top image caption: His Holiness the Dalai Lama’s recent surprise visit to Mongolia has left serious repercussions for the Mongolian people, which the Mongolian leadership has had to take significant steps to mitigate.

The Mongolian people are hurting. In a few relatively short years, the mineral-rich country has gone from being Asia’s next golden child to an awkward binge drinking and debt-ridden teenager with behavioral issues. The government does not have enough money to pay its own staff and the proud Mongolian people are resorting to all manner of ways to pay for goods and services including antiquated barter. And all this is before a public debt and fiscal commitments totaling $4.3 billion become due in 2017.

A bailout was imminent to stop the Mongolian economy from disintegrating and the government was in the midst of negotiations with China, who is the biggest buyer of Mongolia’s commodities and its main investor. This Asian tiger was also the provider of a $2.3 billion currency swap in 2009 that staved off Mongolia’s economic meltdown then. Clearly China is important to Mongolia and has been a friend to the landlocked nation.

But His Holiness the Dalai Lama’s recent visit to Mongolia forced a change and dampened hopes of big brother China coming to Mongolia’s aid again. What is curious is why the Mongolian people would invite the nemesis of the Chinese government for a visit precisely at a time when they have to be extra friendly with the economic juggernaut that is China.

What is even more telling is why the Dalai Lama would agree to be hosted at such a time when he was fully aware that his visit would impair the very pivot that the Mongolians desperately need to turn their economy around. A week after Ulaanbaatar welcomed the Dalai Lama, China imposed what is essentially a blockade preventing Mongolian trucks from crossing over its borders. Things are now bleaker than ever for Mongolia. The Dalai Lama’s visit as it turned out was neither kind nor wise.

Again we witness what many nations of the world have realized for some time now – there is only ruin in the wake of supporting the Tibetan ’cause’, especially now, namely because overt friendship with the Dalai Lama and the Central Tibetan Administration (CTA) is seen by China as taking the side of what China regards as a ‘separatist’. Also because as Ugyen Gyalpo, the regular columnist of The Tibetan Sun notes, Tibetan politicians are only interested in seeking out what benefits them without further calculating much else.

So it didn’t matter if the Dalai Lama’s visit plunged the Mongolians deeper into despair as it was never their concern. This would also explain the recent assertion by the CTA’s Sikyong Lobsang Sangay, that India should prioritize the Tibet issue above India’s own national interest and cross-border issues matters with China. 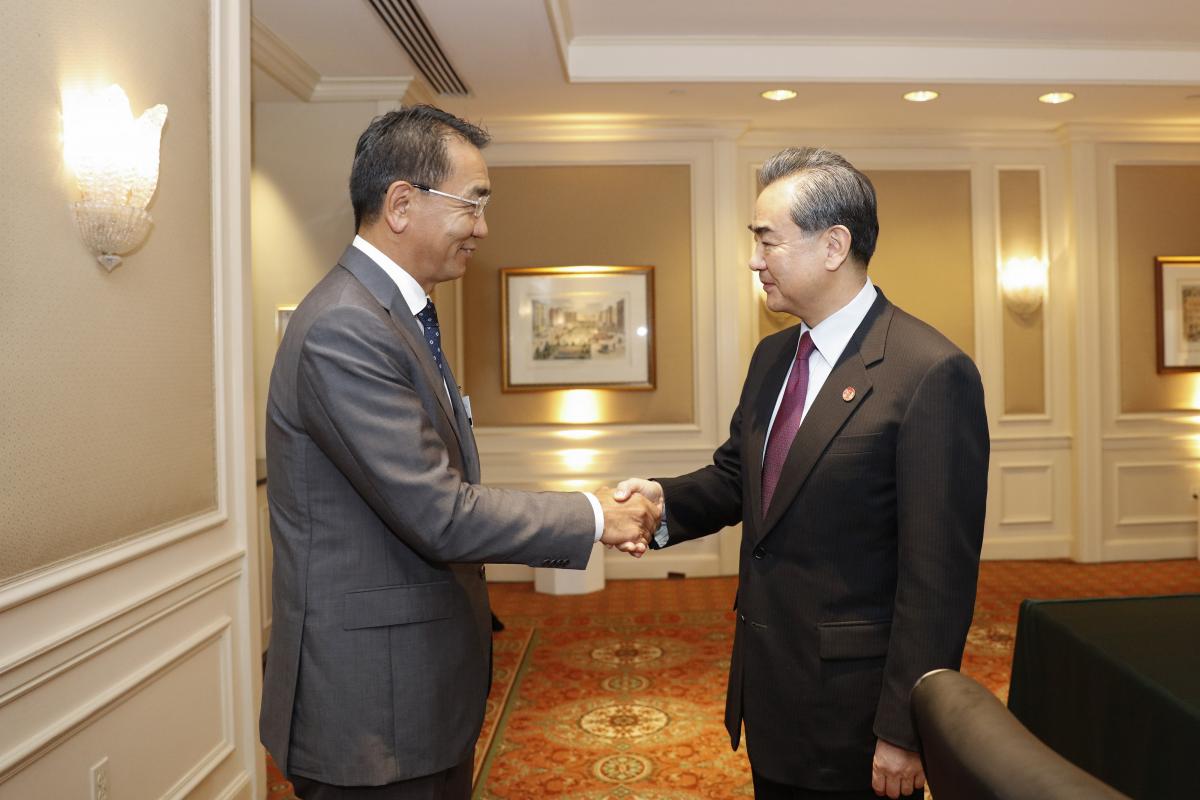 Ultimately, the Tibetan government’s self-seeking ways have backfired. As China lodged their complaints over the Dalai Lama’s visit to Mongolia, the Mongolians reacted by banning the Dalai Lama from ever visiting the country again. The Mongolian Minister of Foreign Affairs Tsend Munkh-Orgil confirmed in an official statement picked up by news agencies around the world that the Dalai Lama will henceforth be barred from entering Mongolia even if the purpose of the visit is purely spiritual in nature. In particular, the Minister stressed that all recognitions and enthronements of Mongolian lamas, especially that of His Holiness the 10th Khalkha Jetsun Dhampa, the highest ranking Gelugpa lama in Mongolia, should be purely a Mongolian affair and without the interference of the Dalai Lama.

And with that, another door closes to the Dalai Lama not only as a figurehead for the Tibetan struggle but also with the Dalai Lama as the main influence of Buddhism in Mongolia. Ironically, as a result of the Dalai Lama’s visit to their country, the nation most associated with the rise and sovereignty of the Dalai Lamas has joined the increasingly loud chorus of nations that have picked China over the Dalai Lama.

After 57 years of struggle the ‘Tibetan Cause’ is no more than a romantic notion and a simple and facile way for liberal governments to boost their public relations image. The reality is none of the governments, including India, that appear to be in support of the Dalai Lama has ever denied that Tibet is a part of China.

After all, the liberal West countries that seem to be behind the Tibetan struggle to gain independence were not always benevolent masters, and have built their nation’s wealth and status on the backs of natives who had their homelands brutally annexed and their people treated as savages, to be denied their own identity, culture and religion. Even today those who condemn China’s human rights record have much of their own unresolved atrocities to explain away. Who would dare now to brazenly accuse China of the same acts, especially in light of the fact Tibetans in exile have little (if anything at all) to benefit its supporters? An honest examination will lead anybody to conclude that there is little to benefit from a close relationship with the Tibetan leadership, whether economically, politically or ethically.

The Dalai Lama’s government (the CTA) has over-played the sympathy card which they exploited for over half a century. In the same time, China rose from the ashes of Mao’s destructive rule and became not merely an economic superpower but also a competent ally in a complicated and globalized world. And if the Dalai Lama and his exiled government’s eyes have been trained on seeking out opportunities that benefit only themselves, how then can they begrudge anyone from doing something similar in seeking China’s friendship to advance their own well-being?

With Mongolia’s announcement that they recognise a One China policy, and they have banned the Dalai Lama from further visits to their country, Tibetans in exile are today left with few competent friends. These few remaining friends are now vital given the CTA’s gross ineptitude to manage its own affairs in a time frame within which many nations have won independence. The Dalai Lama should now realize that he is left with only one card to play: to reunite all Tibetans he had previously disenfranchised, for example the Jonangpas or the Karma Kagyu practitioners who are in support of the Karmapa Thaye Dorje, as well as Dorje Shugden lamas who before his religious apartheid, were spiritual powerhouses.

They remain influential and are bound tighter by the common religious oppression they face. In the 20 years since the Dalai Lama’s ban on the Dorje Shugden practice, these lamas have spread around the world and have built impressive networks of followers transcending politics, borders and socioeconomic stratum. The most prominent Tibetan Buddhist centers in the world today are built by Shugden lamas and most are still managed by lamas who have kept their faith in the deity the Dalai Lama prohibited and in so doing, weakened the Tibetan state immeasurably. There are 4 million Shugden practitioners in the world that the Dalai Lama and CTA can tap into, to be goodwill ambassadors of the Tibetan issue. And as doors close to the Dalai Lama, the spiritual leader must now call for the repair of bridges necessary for all Tibetans to be reconciled but to do that, he must first abolish this woeful religious ban.

Mongolia says Dalai Lama will not be allowed future visits 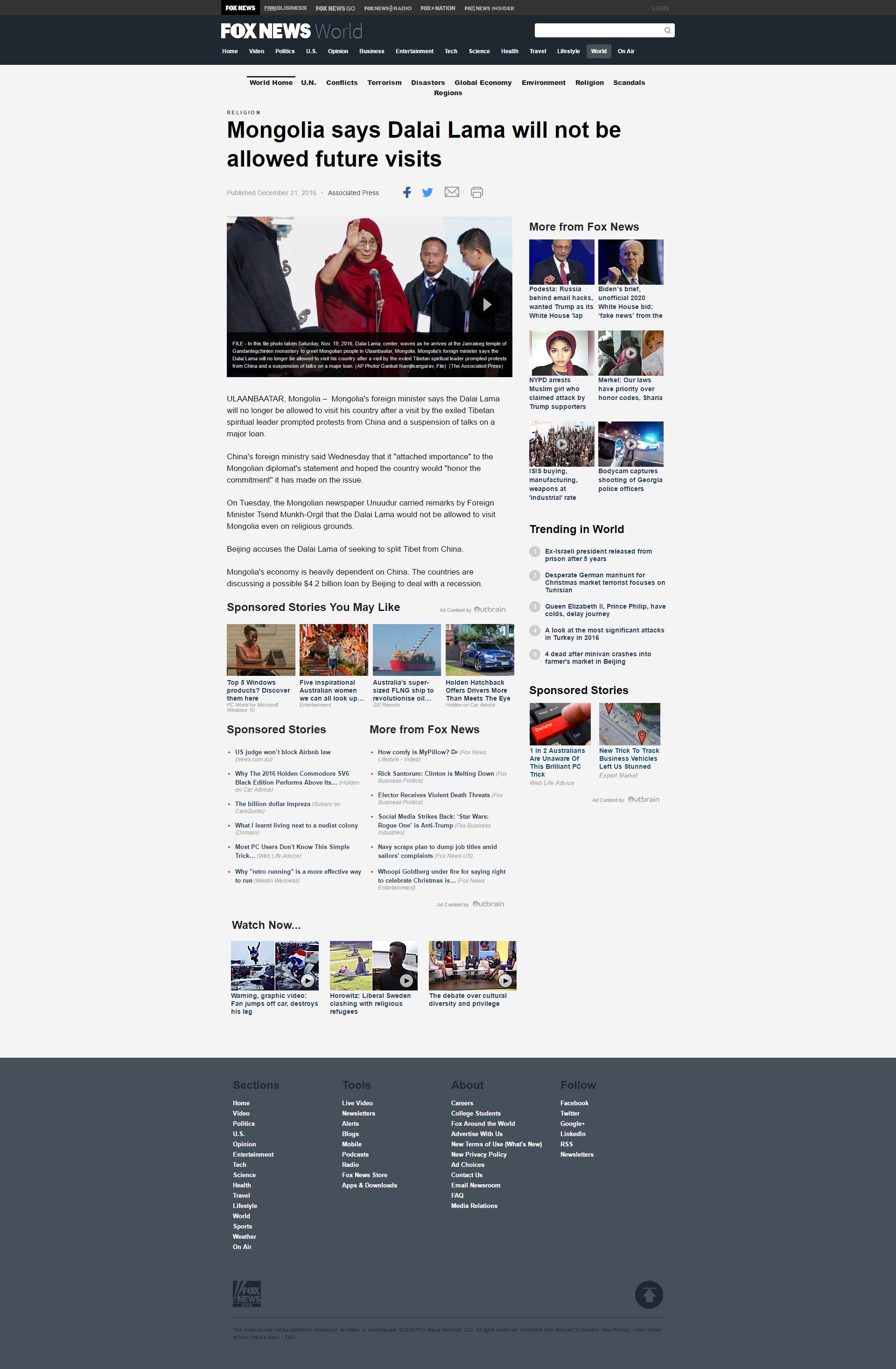 Mongolia Says Dalai Lama Will Not Be Allowed Future Visits 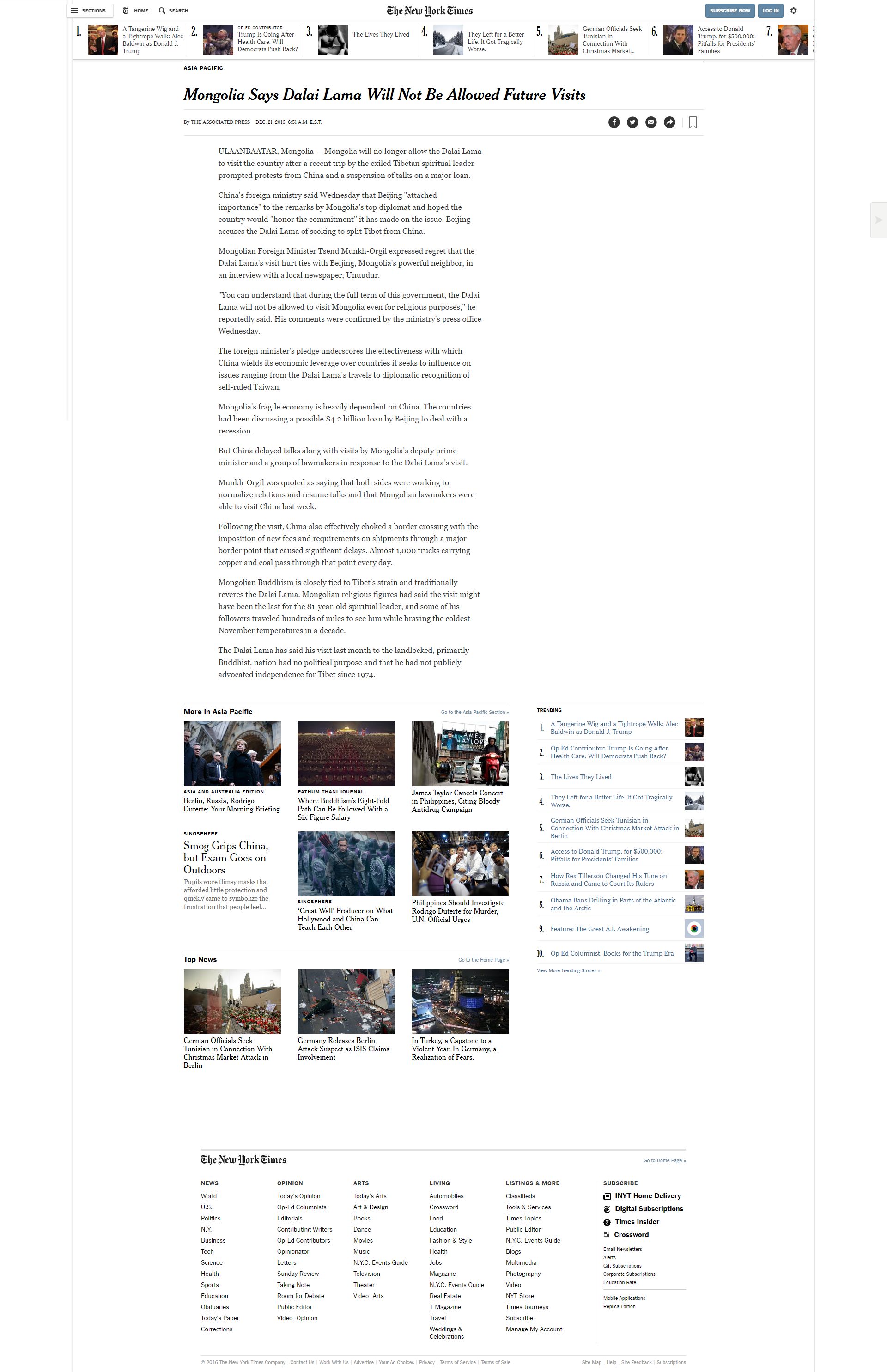 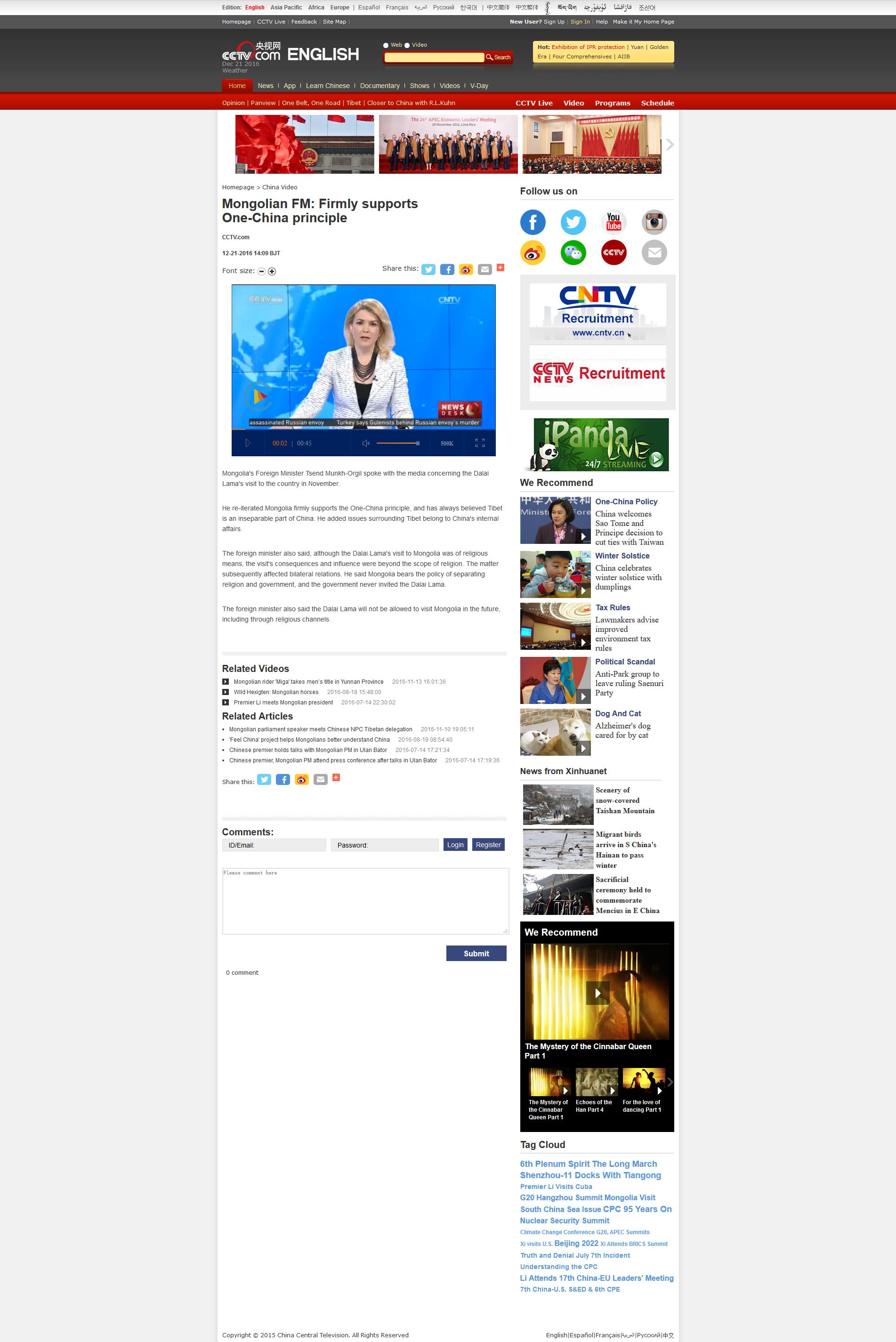 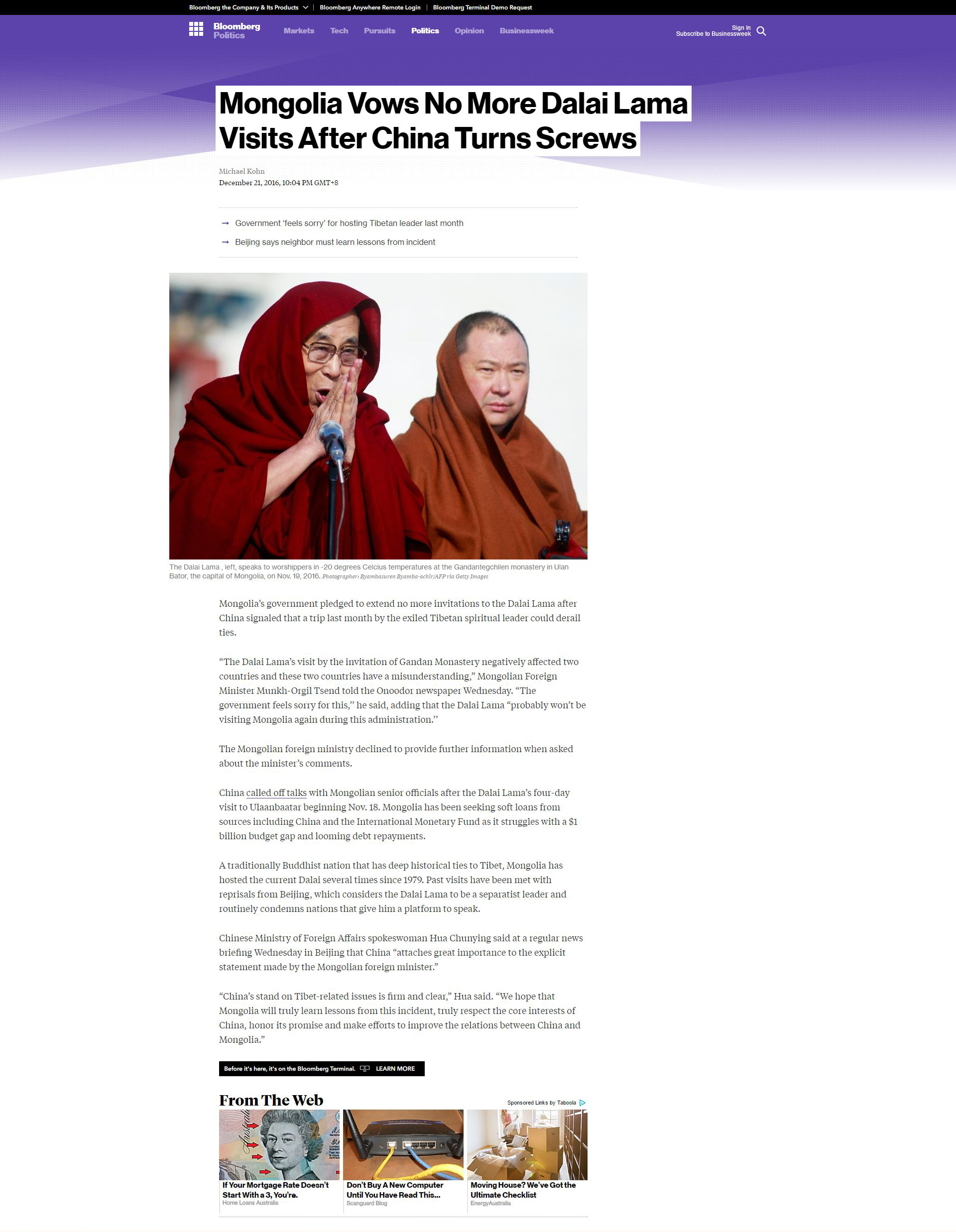 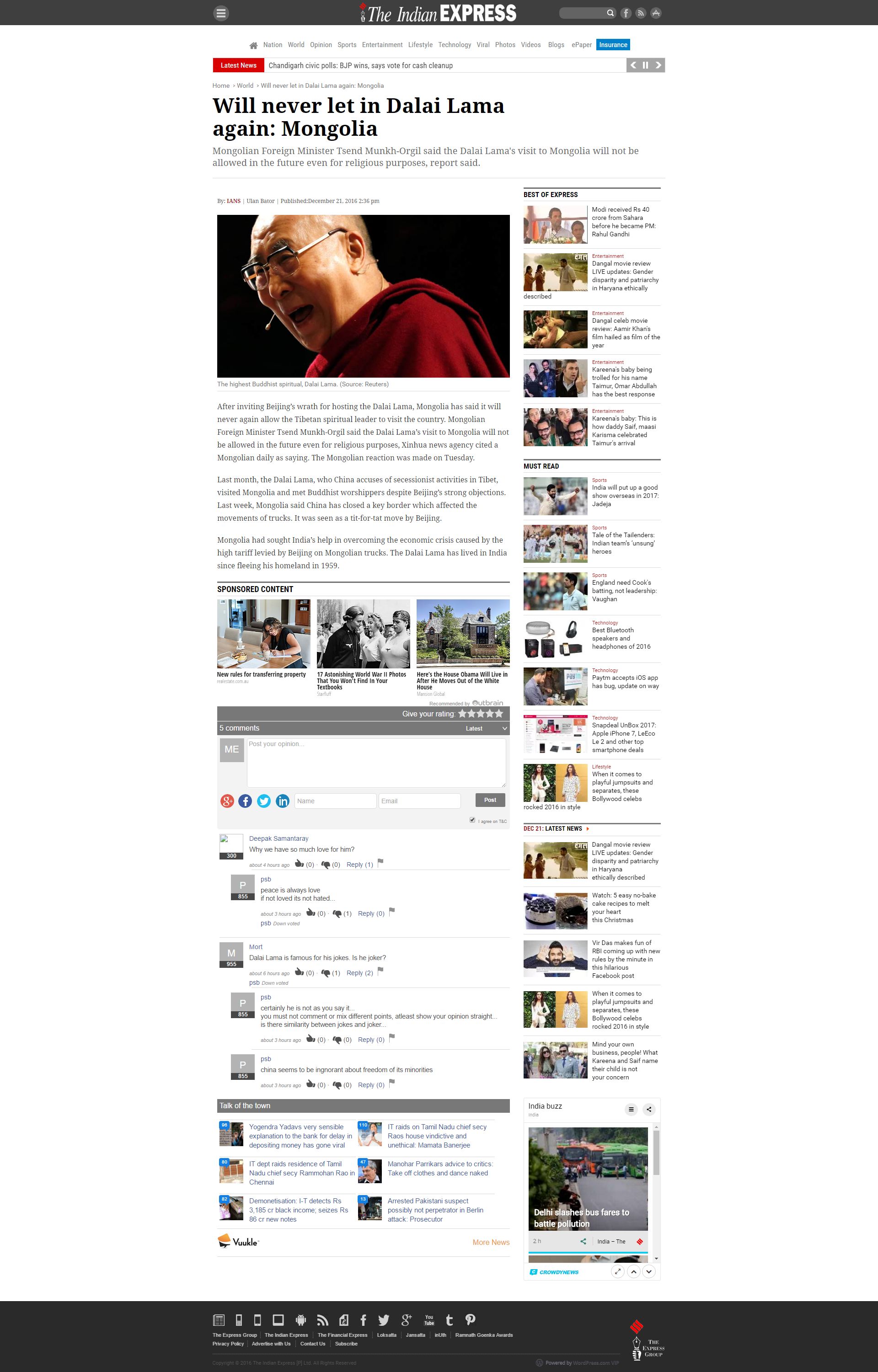 Mongolia not to allow future visit by Dalai Lama 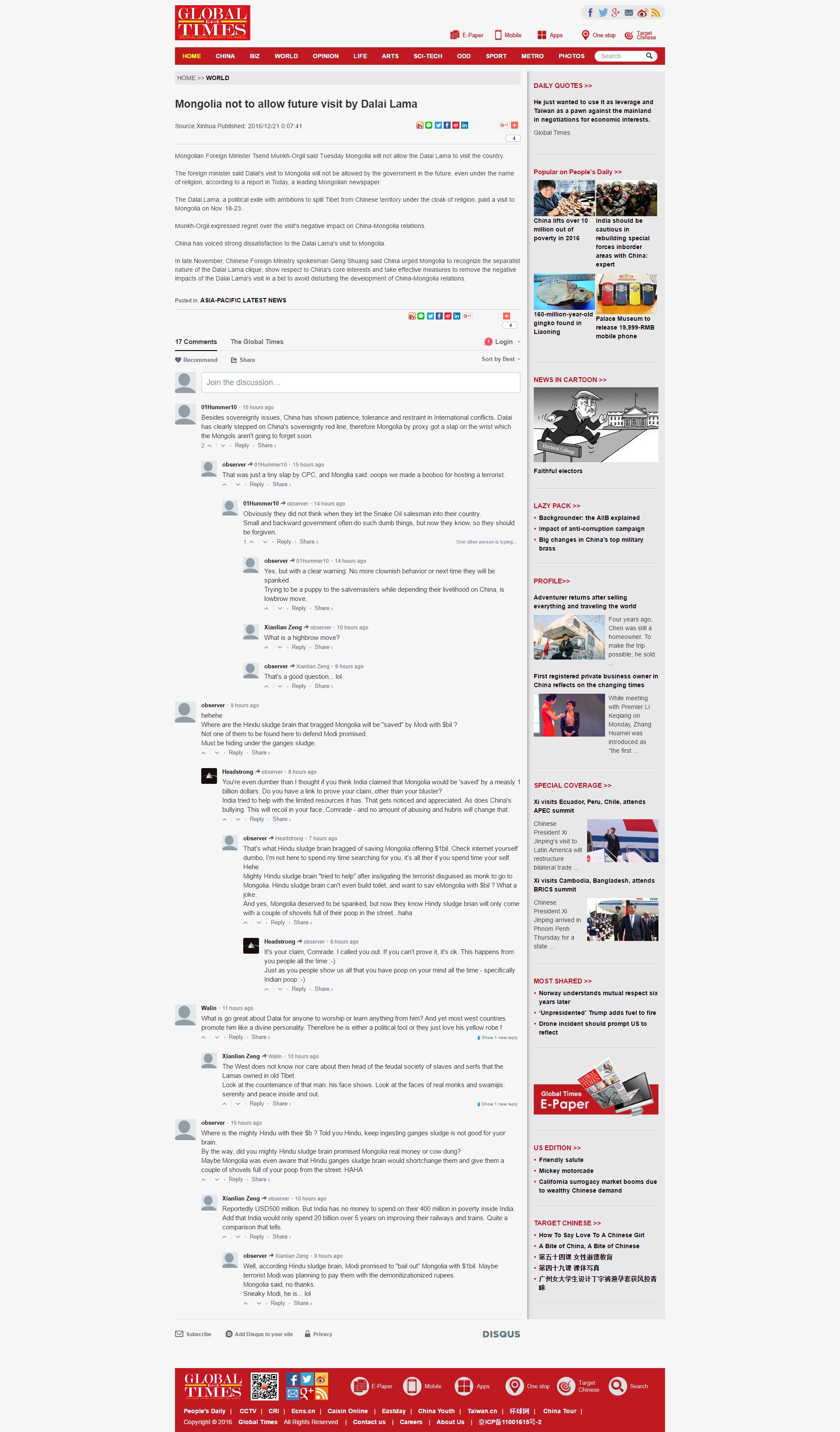 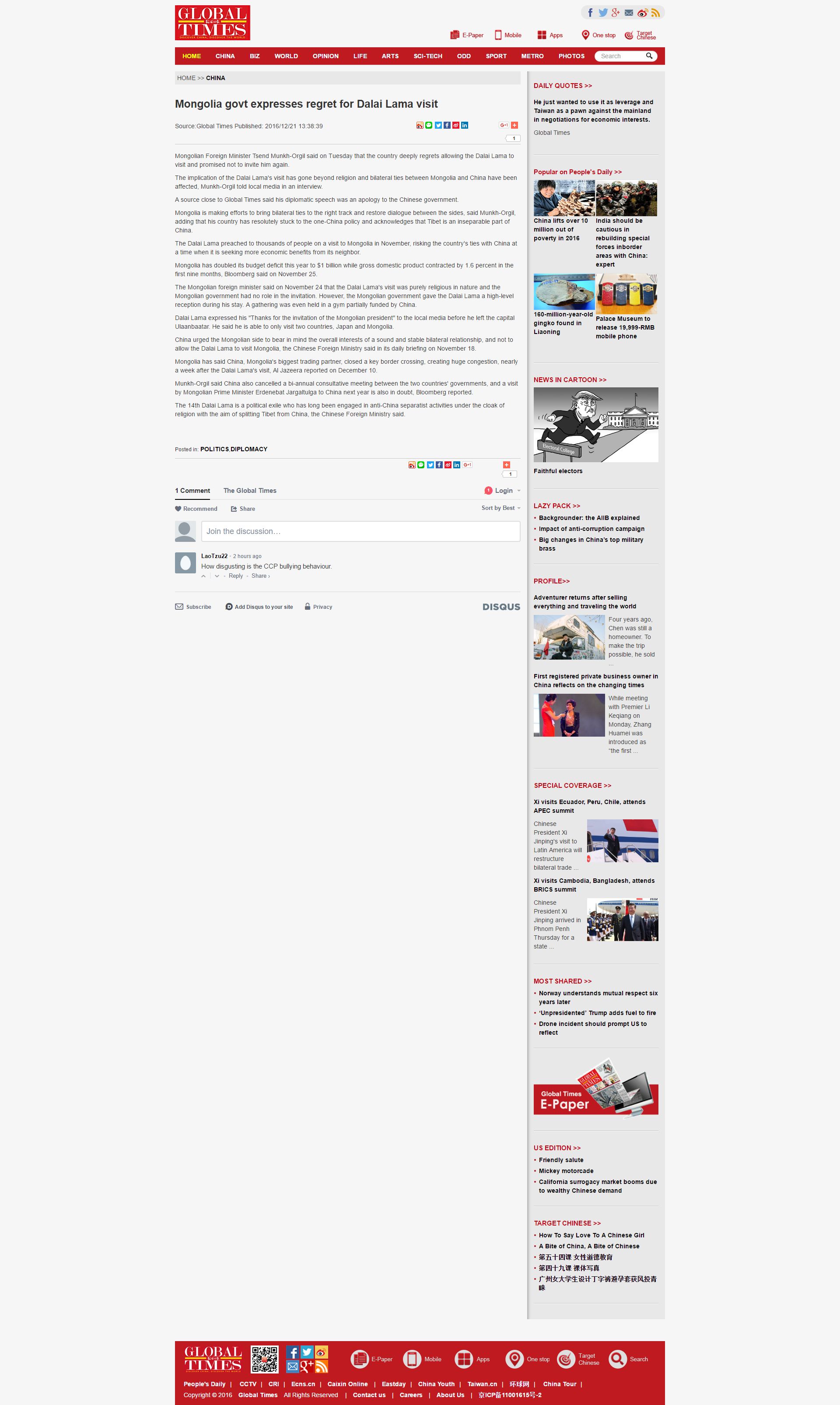 Mongolia says Dalai Lama will not be allowed future visits Mongolia may default in 2017 without urgent foreign funding, warns Eurasia

It’s Bad to Be Seen With Tibetan Leaders