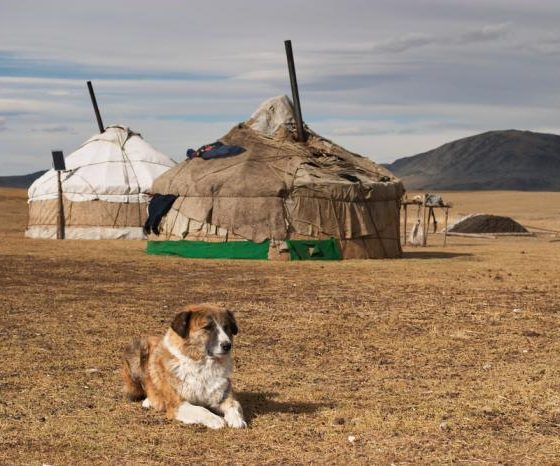 Mongolia is reeling from impending economic meltdown in March as previous measures to solve its almost $600 million financial commitment to bond holders dissolved into thin air amidst qualms over His Holiness the Dalai Lama’s visit. Originally in negotiations with China to help solve its dire fiscal situation, the Tibetan religious leader’s visit to Mongolia led to a breakdown in talks between the two countries. The economic situation in Mongolia has now degenerated so badly as to warrant private citizens donating their personal assets to the government in a last ditch attempt to save the country’s economy from financial ruin.

In hindsight this fiscal maelstrom, as reported in the article below, could have been easily avoidable through talks and deals with China and the International Monetary Fund. However negotiations with China collapsed after the Dalai Lama’s visit to Mongolia. Despite warnings from China that such a visit would strain relations between the two countries, the visit proceeded, something that the Central Tibetan Administration publicised heavily on its own website. In the aftermath of China pulling out from the negotiations, the Mongolian government even banned the Dalai Lama from entering Mongolia in an attempt to placate China back to the negotiation table. With such disaster hitting, the Central Tibetan Administration remains silent in regards to Mongolia’s current situation. Having fully supported the Dalai Lama’s visit, the Tibetan leadership now choose to ignore the outcome of their endorsements.

Mongolia and Tibet have a long, complicated but mutually shared spiritual history, something that has led to strong relations between the two countries, since before the time of His Holiness the 4th Dalai Lama, Yonten Gyatso, who was born in Mongolia, and was a great-grandson of Altan Khan. Altan Khan himself is remembered for instigating and strengthening ties between Mongolia and Tibet.

The Central Tibetan Administration’s promotion of this event was originally seen as an extension of their support for Mongolia, its people, its spiritual traditions (that stem from Tibet) and the fact that many people consider the Dalai Lama to be their spiritual leader. They had couched the visit in terms of spiritual wellbeing and harmony, but given their lack of support or even mentioning the fallout from the visit, it is evident that their intentions were not all that pure after all.

Well aware of Mongolia’s dependence on foreign support, the Tibetan Administration have conned the Mongolian leadership to stand up to China for their own ends. In pulling out the sovereignty card and standing up to China, through their heavy support for the Dalai Lama’s visit, the Tibetan leadership has worsened Mongolia’s economic situation. Adding salt to the wound, they do nothing to support Mongolia, do not promise aid or political help but kept quiet when their so-called friend is in urgent need to stave off the worst fears of any leadership – economic breakdown. For all intents and purposes, the Tibetan leadership has used Mongolia for its political usefulness, but offer nothing in return when the country is in serious trouble. They simply chewed on them until there was no taste left, and spat them out to be discarded once their usefulness was over. A simple glimpse of Mongolia’s financial situation and events over the past year, makes the Tibetan leadership’s exploitation of the country glaringly obvious.

For a leadership that claims to follow the Dalai Lama, a Buddhist monk, the actions of the Tibetan leadership by pulling out the sovereignty card, shows the underhanded and wholly un-virtuous exploitation of an entire country to fulfil their selfish aims. Mongolia now teeters on the edge of disastrous economic ruin, and the Tibetan leadership – the direct cause of the situation, which could have been avoided – are nowhere to be seen and offer not even a statement of support, betraying their own selfish intent. Strangely, India said they would step in among other countries to assist, but it looks like the assistance was too meagre to bail Mongolia out. Unfortunately, it will be the average Mongolian citizen who will need to bear the brunt of this costly political predicament with China while the Tibetan leadership gets away scot-free with yet another one of their underhanded political manipulations to assert their sovereignty at the expense of another country. You can read more about the dire situation that Mongolia faces below. 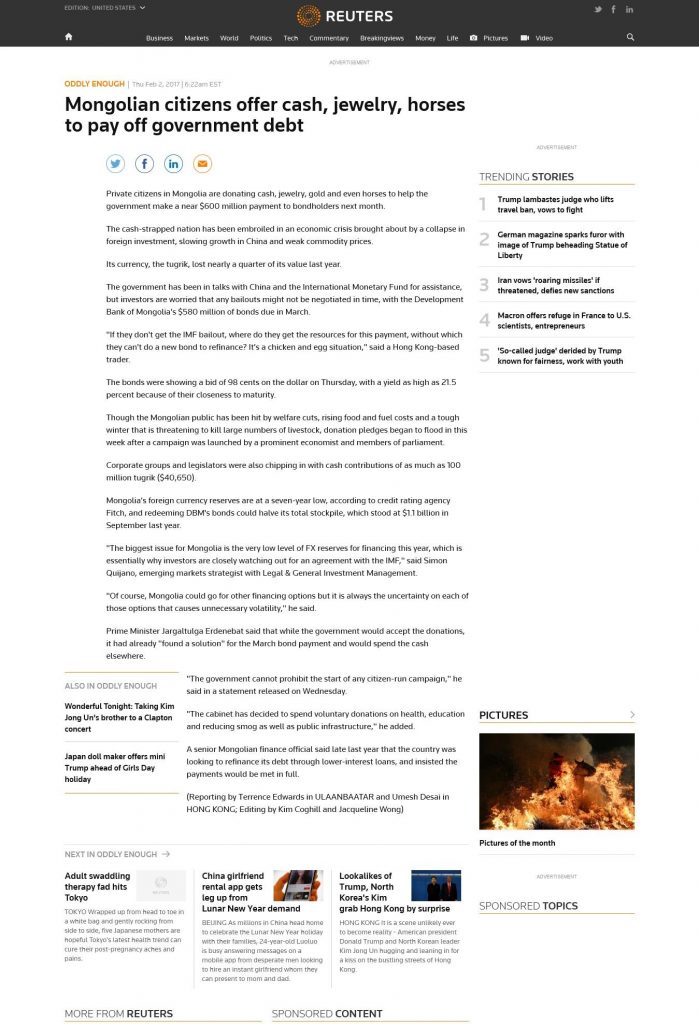 Click on image to read the full report. Source: http://www.reuters.com/article/us-mongolia-bonds-idUSKBN15H14G