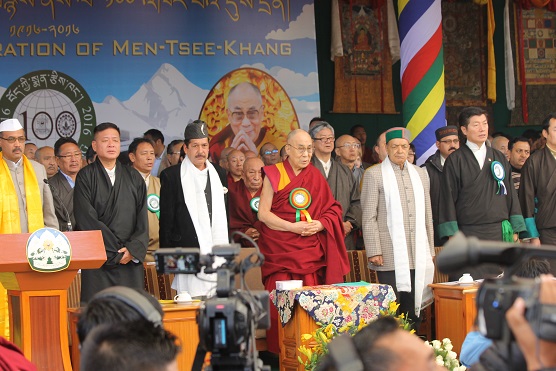 Based on Maslow’s law, the most basic need of a society is that of physical necessities such as food, clothing, shelter and… healthcare. Hence, world leaders and governments have a fundamental responsibility to provide conditions that will fulfill a certain quality of life to enable their people to progress to the next levels of development. The emphasis on healthcare in the electoral campaigns of developed nations like America shows us the importance that modern, democratic and progressive societies place on the provision of reliable and accessible healthcare. Thus the ability of a government to guarantee this basic standard in quality of life is one major quality necessary to be in power and to remain in power.

It is very sad and it raises suspicions that the Central Tibetan Administration’s (CTA) Department of Health and the Tibetan Medical and Astrological Institute have failed to fulfill this basic responsibility towards the Tibetan public after 55 years in exile, despite a constant inflow of monetary support and resources from supporters from various parts of the world. How would loyal sponsors of His Holiness the Dalai Lama and supporters of his cause feel if they discovered that their sincerity and generosity resulted in a failed healthcare system that is unable to meet the needs of the Tibetan public, and that also discriminates against Tibetans who are Dorje Shugden practitioners? How would these supporters feel if they saw Tibetan leaders constantly flying abroad to engage in dialogue to increase awareness of the Tibetan cause and raise more funds, while their people continue to languish in ill health? Questions must be asked about what happened to the millions of donations that the Central Tibetan Administration has received and what it has been spent on. Clearly the lack of accessible healthcare is indicative that the donations did not go towards the overall improvement of the Tibetan people’s welfare.

Around 300 participants from around the world, mostly from India, gathered at Men-Tsee-Khang, formally known as the Tibetan Medical & Astro Institute.

One of the first people to question the lack of accountability and the failure of the Tibetan leadership to show tangible results is US Congressman Dana Rohrabacher. In a letter published in 2014, he accused the CTA of mismanagement of funds and threatened a decline in American financial support should the Tibetan leadership continue to fail to use the funds to improve their people’s welfare.

Congressman Rohrabacher was voicing the opinions of many Tibetans frustrated with their leadership. Although many Tibetans have suspected corruption and embezzlement within their leadership for many years, it has not been easy for them to speak openly about this. Tibetan society has always dismissed critics of their leadership as being ‘anti-Dalai Lama’, a dangerous accusation because it results in the person being ostracized, marginalized and possibly even physically harmed for their comments. Indeed, in his letter, Congressman Rohrabacher also remarked on the lack of free speech within Tibetan society, writing that

The rules… appear to have the effect of anti-democratically restricting free speech and free association, at a time when the current CTA incumbents are seeking reelection.

So His Holiness the Dalai Lama’s remarks at the opening of the Men-Tsee-Khang (Tibetan Medical and Astrological Institute) is notable in the way it accuses his people of the same thing– spending money on unnecessary ceremonies, instead of offering practical help to the Tibetan people. The fact that these governing bodies would invest funds to have a pompous opening celebration instead of directing the resources to obtain more and better medical supplies and staff reveals the priority of the Tibetan leadership, which is to look good instead do good. It is very dangerous when the leadership would jeopardize the welfare and well-being of their own people for an ego trip. Perhaps it is the severity of the situation that has left His Holiness the Dalai Lama no choice but to step in and address the problem.

His Holiness literally pointed to the CTA’s hypocrisy by covering the poor work they are doing for the people with “grand” ceremonies that do not contribute to mission of Men-Tsee-Khang, which is to relieve some of the hardship and suffering of the community in exile. The Dalai Lama said that true practice of the spirit of healthcare is not in just praying to the masters who write the texts but in the application of this wisdom, combined with compassion and motivation to benefit others.

It is worth noting that the problems in the Men-Tsee-Khang did not develop overnight but are the accumulation of willful misdemeanors by the Tibetan leadership. The gravity of the CTA’s corruption extends to their direct interference with the work of the Tibetan healthcare system. The Men-Tsee-Khang and its faculty say they intend to engage in outreach programs, which will be in alignment with their mission to provide accessible healthcare to the public, regardless of caste, creed or color. 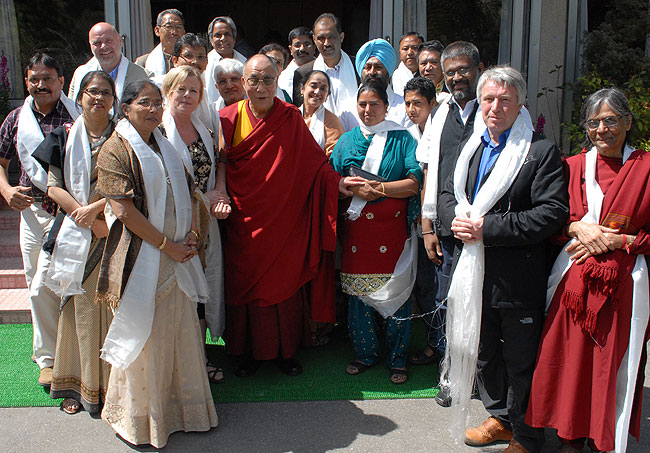 The Men-Tsee-Khang sponsors and supporters from India and Europe with His Holiness the 14th Dalai Lama.

From experience and history however, we know that their supposedly noble and humane motivation is not the truth, and it does not apply to all sectors of Tibetan society due to the ban on Dorje Shugden. Members of the Department of Health for example, were forced to give up their Dorje Shugden practice if they wanted to remain in their positions and a memo was disseminated stating all staff should not be Shugden practitioners. In subsequent years after the dissemination of the memo, providers of medical care in Tibetan society have categorically denied medical attention and service to Dorje Shugden practitioners. Providing medical attention is not a spiritual or political matter but a universal basic responsibility and human right.

These inhumane decisions and actions of the Tibetan medical service stem directly from the enforcement of the Dorje Shugden ban by the CTA. The CTA have basically decreed that it is okay to deny medical treatment for Dorje Shugden practitioners, so that they will suffer sickness and even die because they practice Dorje Shugden. What is the purpose of such cruelty and discrimination? There is never justification to inflict suffering upon others and this extremism of the CTA has left even their own gods with no choice but to step in, as Nechung and Tseringma have recently done.

Take a moment to read what His Holiness has to say. The failure of the CTA in fulfilling its responsibility towards its people, its supporters from all over the world and the Dalai Lama has been an on-going chronic problem that must be now seized and addressed by the public.

DHARAMSALA, March 23: The Tibetan leader His Holiness the Dalai Lama today pointed towards a possible failure on the part of the Central Tibetan Administration’s department of health and the Tibetan Medical and Astrological Institute in providing healthcare to the Tibetan public. “It appears that there has been a significant failure by Health Department and the Tibetan medicine section of the Men-Tsee-Khang in tackling issues related to preventive measures in healthcare. While there are many Tibetans in the settlements that are afflicted with various ailments, we engage in pomposity here. It would be ‘grand on the outside but shallow inside’ if we put on grand proceedings here while there are lagging in our work on the ground. I may yet live for ten or fifteen years more, you all have the responsibilities now,” the Tibetan leader said at the centenary celebrations of the Tibetan Medical and Astrological Institute here.

His Holiness, however, said that the Tibetan people’s struggle in all spheres of life in exile has borne result. “Against the overwhelming hardships that we faced in exile, we have poured in together our determined efforts and unified endeavor. It has been almost 57 years and Men-Tsee-Khang is part of that struggle. We have all worked tirelessly and honestly and, often putting the public goal before and the results is considerable,” said His Holiness.

While expounding on the importance of the traditional Tibetan education that includes the sowa-rigpa (traditional Tibetan medicinal science), His Holiness reiterated the importance of not just praying to the masters who wrote the texts but rather study and dwell on the written wisdom of those masters for the furtherance of oneself and the science.

“The Tibetan medicine is truly effective on a wide range of ailments especially those related to preventive diagnosis,” said the 80 year old Tibetan leader. On a lighter note, His Holiness said that his knowledge of Tibetan medicine is at par with that of substandard Tibetan physician as he has consumed considerable amount of pills over the course of his life and is well aware of which medicine to take for different ailments.

The Director of Men-Tsee-Khang Tashi Tsering Phuri said, “It’s a collective effort,” while thanking his staff and students for having made it this far. He said, “We rejoice because we did our best to achieve a level and at the same time we rededicate our services, firmly believing in the noble goal to benefit humanity.”

He recounted what the His Holiness had said when he first reestablished the institute in exile, “His Holiness had said then ‘Right now, Men-Tsee-Khang is very small facing acute problems in terms of money and man power but some thirty, forty years later, Tibetan medicine will speak for itself’.”

As of now, the medicine production unit in Dharamsala is struggling to cater to overwhelming domestic demands from its own 55 operating clinics in India and Nepal. The institute has begun to tread on collaborative ventures with a few Indian states and has projects in the pipeline to bolster export demands abroad. Besides the medicine and treatment of patients from many countries, the institute also boasts of a respectable college that produces doctors trained in the traditional Tibetan medicine.

The journey of the institute in exile had modest beginnings with only one doctor and a few monks. That doctor; formerly a personal physician to His Holiness, Amchi Yeshi Dhondhen, was today felicitated for his contribution to Tibetan medicine and the institute. The Tibetan Medical and Astrological Institute intends to engage in outreach programs in India and abroad in the near future. In keeping with the mission statement to provide accessible health care to the people regardless of caste, creed or color, the staff of the institute have pledged 100 hours of their salaries towards the same. 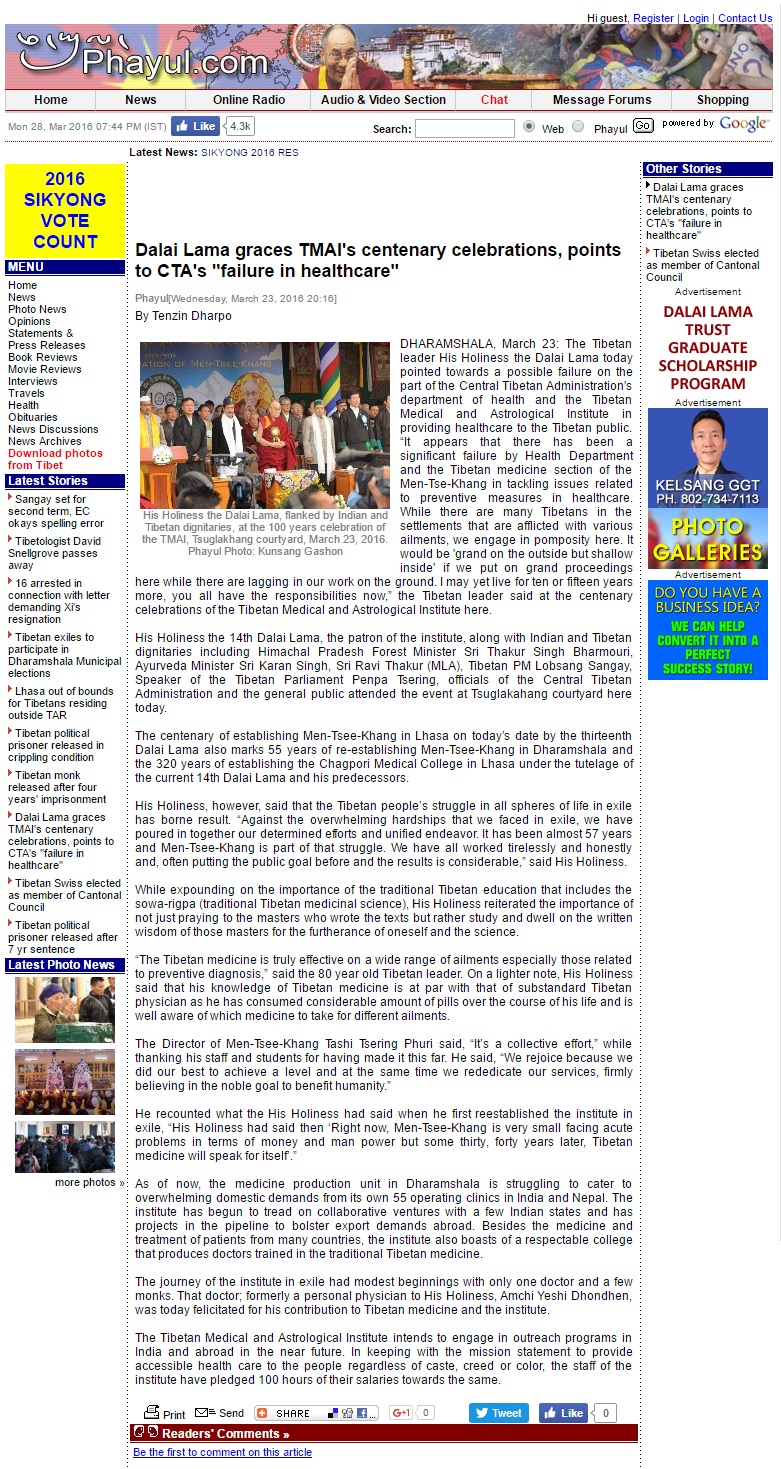