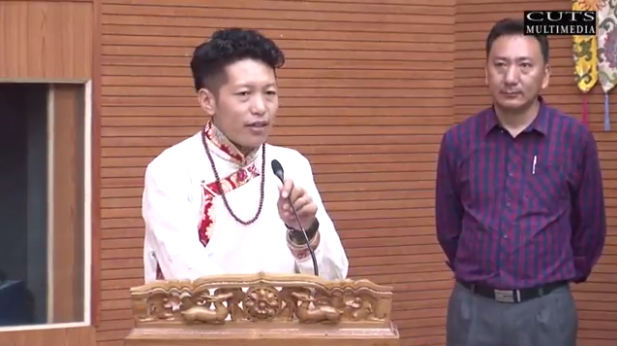 Top image caption: This young man asked three questions of the Sikyong. It was a very brave move considering students at the Tibetan Children’s Village (TCV) School in Dharamsala had previously suffered an interrogation session after they questioned their Prime Minister too. Or perhaps being young and not an adult protects him to a certain degree, since Tibetan adults who have spoken their minds have frequently found themselves on the receiving end of violent repercussions for doing so.

Change comes when those who want something better for themselves dare to spake up to hold leaders accountable to the people. After all, how else will democracy be defined? Jangchup Wangmo analyzes.

On July 14, 2017, the Tibetan Prime Minister Sikyong Lobsang Sangay visited the Central University of Tibetan Studies (CUTS) in Varanasi, India. Varanasi is known throughout the world to be an intellectual powerhouse; many of India’s political and philosophical greats spent time there studying or teaching.

For many students, this visit has become memorable and regardless of who you ask, it is mostly for the wrong reasons. The Sikyong’s visit to the university was marked by two incidents. The first was news that a 20-year-old CUTS student, Tenzin Choeying, had attempted to self-immolate. Saying that it was for the Tibetan cause, he also made it a point to state it was not the Prime Minister’s fault and that he was doing a good job. This statement however, has drawn doubt and ire from many quarters of the Tibetan community, who question why he even felt the need to utter a statement like that. If someone is doing a good job, if there is no possibility of them being blamed for it, then there would be no reason to bring it up at all. Sadly, the Tibetan community lost another brother when Choeyingla finally succumbed to his injuries six days later, with 90% burns all over his body.

The second incident that has been said to have marred Sikyongla’s visit is when students had an opportunity to question their Prime Minister. One young man in particular, stepped up to the podium and asked the Prime Minister some tough but fair questions. This is not the first time the Sikyong has had to field such questions from the youth. In 2014, while visiting the Tibetan Children’s Village (TCV) in Dharamsala, teenagers questioned the Sikyong’s policies and actions towards Dorje Shugden worship.

Instead of being rewarded for fair and open-minded thinking, the TCV students were hauled up in front of the authorities and interrogated as to why they had questioned the Sikyong in such a manner. Imagine if the leader of any other democratic nation did that to their children, and the kind of uproar that would ensue. Imagine the uproar that would ensue if former US President Barack Obama arranged for students to be interrogated each time they asked him difficult questions at town hall meetings. In a real democratic country, bullying and intimidating the youth would never be accepted. Yet, under the Tibetan regime, this is commonplace to the point it takes place without question. 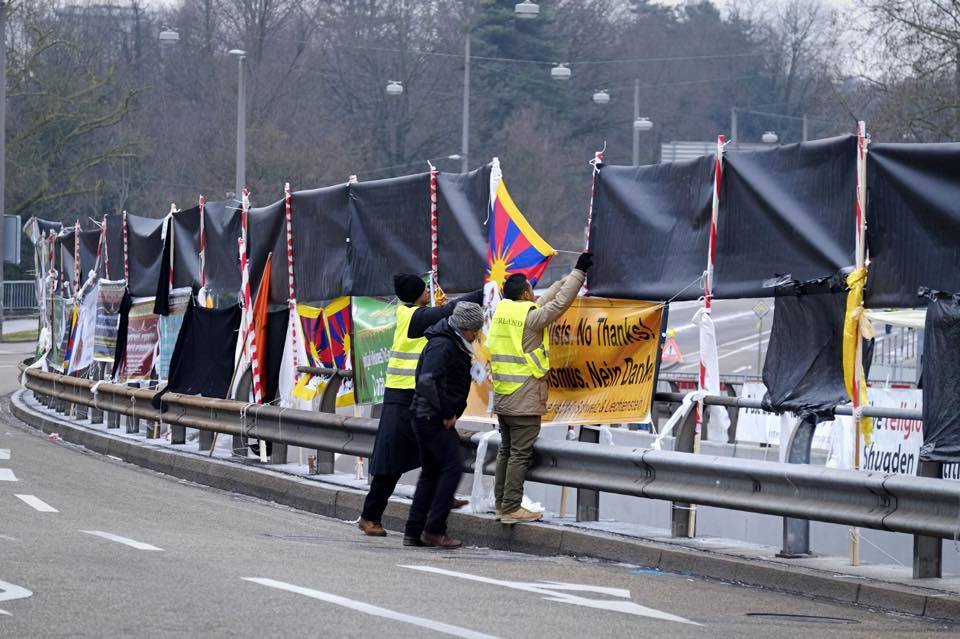 How the Tibetan leadership trains their people to treat freedom of speech. Instead of respecting the rights of Dorje Shugden protesters to campaign against the ban, the Tibetan leadership tries to keep them out of sight with large black banners. Whether or not you agree with the practice is not the point. The point here is that if the Tibetan leadership was really a democratic government, they would encourage all forms of free speech, regardless of whether the content is flattering for them or if the views do not match theirs.

This latest incident at CUTS however, proves that when exposed to more and different sources of information, Tibetan youths are just as capable as any other nation’s youths in arriving at logical conclusions and asking the right questions. They just need to be given a chance to learn about everything and anything without repercussions, and not be penalized each time they want to explore other avenues of thought or viewpoints, as their elders so often experience. For Tibetan adults like Lukar Jam and Jamyang Norbu, they know all too well the price a Tibetan pays for speaking their mind, and for speaking the truth, especially if that truth has not been sanctioned by the leadership. Vandalized property, being run out of the settlements, being dangerously labelled as anti-Dalai Lama and anti-Tibet, and having a smear campaign launched against you is just a start.

Translation
That student says that “I have many questions but I am going to ask my three main questions to Sikyong. With great respect, my first question is to Sikyong that a few years ago, I think I heard from Radio Free Asia that you said, “I went to all the [Tibetan] settlements, to all the universities but I’ve never been to Varanasi [University].” So, today you are here. Are you complete now?

My second question is that it seems like you [Sikyong] are interested in external territories more than internal territories. You go abroad to many places for Tibet’s projects and therefore you are like Samdhong Rinpoche, and that is affecting and harming our internal territory. So what I wanted to tell you is, a few months ago, there was a meeting between the Parliament and the Sikyong and many other members about the serious topic of Tibet. All the members and you yourself are chosen by the public.

The public has hopes in and believes all of you to be good members of parliament. That is why the public voted for you and put you all in this position. So the public were watching that meeting but in the meeting, members of Parliament were so disrespectful to each other. Some were sleeping while others were speaking. Some people just walked away. Even you walked away during meeting and I saw that in the video. That’s what I found is very disrespectful to others as well as to the public, who support you to be their leader.

For those who are familiar with the Tibetan language, they will immediately recognize the humor present in the young man’s style of questioning the Sikyong. While he is using very honorific words and phrases to address the Prime Minister, his questions themselves are very direct and tough, to the point of almost being rude. But because the young man makes light of his three questions in order to lift the mood, he is able to continue asking them although viewers can see clearly that the man behind him is uncomfortable. So while the boy’s words are polite, his questions are quite tough and embarrassing for the Tibetan Prime Minister. 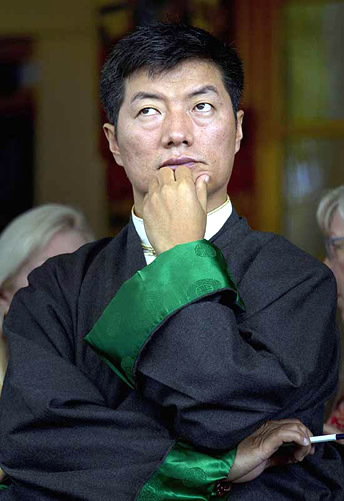 The fact that the Sikyong may be embarrassed by such questions from a young man points to an issue which is endemic within Tibetan society – the leaders in this so-called democracy are not used to being questioned or held accountable for their actions.

But the fact that the Sikyong might be embarrassed by these questions is reflective of a much larger problem in Tibetan society. It is almost as though he is embarrassed because he is not used to being asked such difficult questions, and he does not know quite what to make of it. In actuality, as the leader of a so-called democracy, he should be embarrassed that he is not used to being held accountable! It means that he has not been leading his people well, because the culture of speaking up and being engaged in the political process has not yet filtered through the community after 60 years in exile. That being said, as the leader of a so-called democracy, his people do have every right to hold him accountable and ask him to explain the government’s behavior. Why should members of the public like this young man not be allowed to hold their leaders accountable? As the boy himself says, it was the public who voted the Sikyong and his cohorts into power, and so the public should be able to hold them accountable for their actions too.

The future of the Tibetan people, and the welfare of the community depends on open-thinking individuals like this brave young gentleman. When the stalwarts of the Tibetan political establishment are gone, who will stand at the helm of the community, to lead and guide everybody? It is time that the Tibetan leadership start nurturing people like this man, and harness his clearly analytical thinking towards the benefit of the Tibetan people. So instead of penalizing the youth for their curiosity and open minds, adults like the Prime Minister should actually nurture and foster this curiosity. Curiosity leads to innovation; innovation leads to initiative, and initiative leads to activities which will help to preserve, protect and promote Tibetan culture, religion and history long after the Prime Minister is no longer in power. 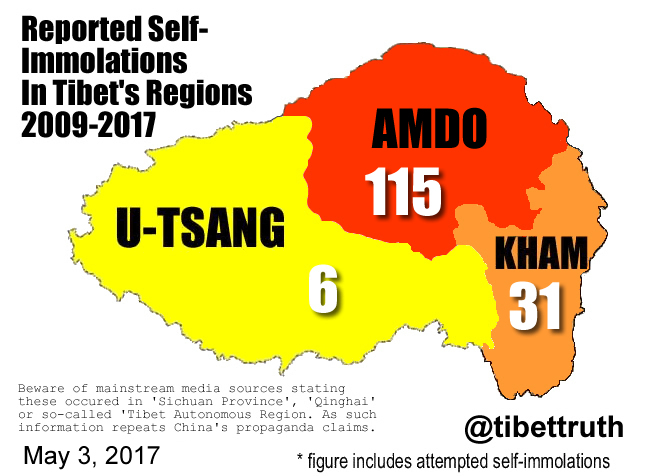 As more Tibetans in Tibet take their lives in an attempt to pressure dialogue between the Tibetan exiled leadership and the Chinese, leaders like Sikyong Lobsang Sangay continue to be relaxed and refuse to do whatever it takes to get these discussions started. In the meantime, more Tibetans will continue to die, thanks to the Sikyong’s lack of creativity and innovation when it comes to initiating the dialogue. (Credit: www.tibettruth.com)

And if the Prime Minister does not find this logic appealing, then consider this – what kind of older, supposedly Harvard educated man, is intimidated by the questions of teenagers? What kind of adult needs to bully a child? From where we stand, to be intimidated by children does not speak well of one’s own qualities and intellectual abilities. It in fact suggests a huge amount of hidden insecurities when a person can be so easily unsettled by the questions of teenagers. Why does the Tibetan Prime Minister want to be surrounded by Yes Men who do not challenge him to improve the welfare of the people? It is sad indeed when the Tibetan Prime Minister so deathly afraid of questions, that he has to intimidate his own people into not asking anything. So instead of learning, instead of forcing oneself to think about the welfare of the community, the Sikyong would rather suppress all forms of free speech and thought, so he can experience the final years of office in comfort, ease and complacency, as he has been doing.

Sikyong Lobsang Sangayla, it is time to start being accountable to your people and letting them get involved in the democratic process without backbites, harassment and violent repercussions. It is time you started respecting your people’s intellect and stop stamping down on their ability to form incisive, analytical questions about your leadership and works. Just because many of them do not ask it, does not mean that many of them are not thinking it. After some time, when they cannot say what they truly feel, the pressure inside will build up until people start to think that they have no choice but to resort to drastic, extreme actions. Just like Choeyingla, the 20-year old who felt that no one was hearing his voice and his suffering, and he needed to do the biggest thing he can – give up his life – to get your attention. In his last moments, this young man did not think about his mother or father; he chose to dedicate his last words to talking about you. Sikyongla, it really is time to get your head out of the sand and realize Tibetans are not going to stay silent about you and your lackeys anymore.