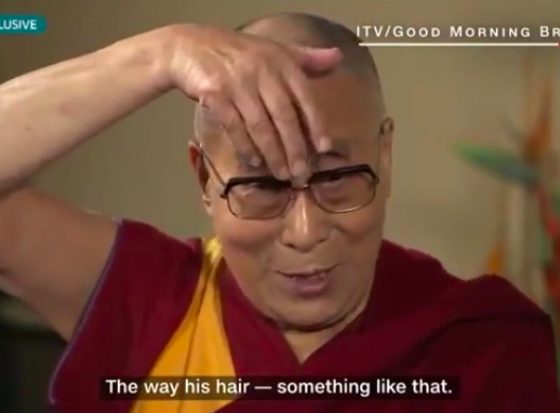 His Holiness the 14th Dalai Lama is the world’s most famous Buddhist1, and is heralded as a shining example of wisdom, compassion, understand and peace. Some have even regarded him as the most beloved and recognized leader of our time2.

By convention, he is the ‘head’ of the Tibetan Buddhist church and many regard him as the “Pontiff of Buddhism”3. Therefore, it is only to be expected for the Dalai Lama to act in a proper manner, have decorum and an air of sanctity because he is regarded as an example to follow for millions in the world. However, the Dalai Lama was very recently seen taking pleasure in mocking someone he has never met, which is unprecedented behaviour for a spiritual leader especially when the Dalai Lama’s main activities revolve around teaching Buddhism to large public audiences all over the world as a Buddhist monk.

The Dalai Lama is also known for his humor, and why shouldn’t he be allowed to tell a joke or two, but there is a big difference between telling a funny joke in a parody where it is appropriate and poking fun at someone especially when it is about someone’s appearance.

But this is precisely what the Dalai Lama did during an interview with Piers Morgan4 which was aired on British television channel ITV on 22 September 2016. In it, the Dalai Lama brazenly ridiculed the then-presidential candidate Donald Trump. A clip of this interview was posted on to YouTube by CNN5 and has been watched over 162,000 times, and has garnered many negative comments about the Dalai Lama’s actions.

This cannot be good for the Tibetan people in exile and for the religion that the Dalai Lama is supposed to represent. It implies the religious leader is prone to public relations gaffes and it redirects attention away from his message, instead compelling the audience to focus on the inappropriate remarks. After all, this is not the first time the Dalai Lama has received negative and widespread media coverage over his flippant comments about physical appearance that Buddhism counsels its adherents to look beyond.

This negative backlash against the Dalai Lama’s actions mirrors what occurred in September 2015, when many expressed shock and disapproval of the Dalai Lama’s sexist and boorish comments about women.6 In yet another interview the Dalai Lama inferred that a woman, and especially his successor (were she to be female), must be attractive otherwise she would be ‘not much use’. In other words, as far as the ‘head’ of Tibetan Buddhism is concerned, you judge a woman by her looks and you place values in looks and nothing else. Notwithstanding that Buddhism teaches the emptiness and impermanence of all things, the Dalai Lama validated chauvinism and a shallow perception of people’s qualities.

Shocked, people all over the world responded by firm criticisms of the Dalai Lama’s comments and this gave rise to a now popular hashtag #DalaiLamaSexist on the social media platform Twitter. Again, this does not augur well for the Tibetan people and Tibetan Buddhism and there will be harmful repercussions.

The race for the White House is now over and the person that the Dalai Lama recklessly mocked is the President of the most powerful nation in the world. It also happens to be the country that is the closest ally of the Tibetan cause. It is widely known that the majority of Tibetans living in America supported Hillary Clinton, and those Tibetans who were entitled to vote, cast their votes for her. We see this preference clearly in the way the International Campaign for Tibet blog proudly posted a picture of the Dalai Lama and Hillary Clinton, endorsing Clinton as ‘The Next American President’7. The reason is easy to see – Clinton as US President is more likely than Trump to maintain support for the Tibetans in exile and allow the Tibetan leadership to stay its course of 50 years and counting, of doing nothing and making no effort to procure real Tibetan freedom.

Hillary Clinton, the choice of the Tibetans? Click on image to enlarge.

But the fact is that the United States has been providing the Central Tibetan Administration (CTA) with millions of dollars in aid on an annual basis. With Donald Trump winning the election, the CTA rice bowl may be in jeopardy and hence they had to make amends for what could be a political and financial loss to the Tibetan leadership. That would explain Prime Minster Lobsang Sangay’s letter of congratulation to President-elect Donald Trump, groveling to cover for the mistake that the Dalai Lama made. This faux pas has become characteristic of the Tibetan leadership. If they cannot hoodwink or intimidate you, they resort to boot-licking. The Tibetan leadership does not seem to have a firm set of policies or even principles in place that govern their purpose and direction. Instead they send an aged Dalai Lama to charm the world but all charms wear thin and then the true character of the leadership shows. 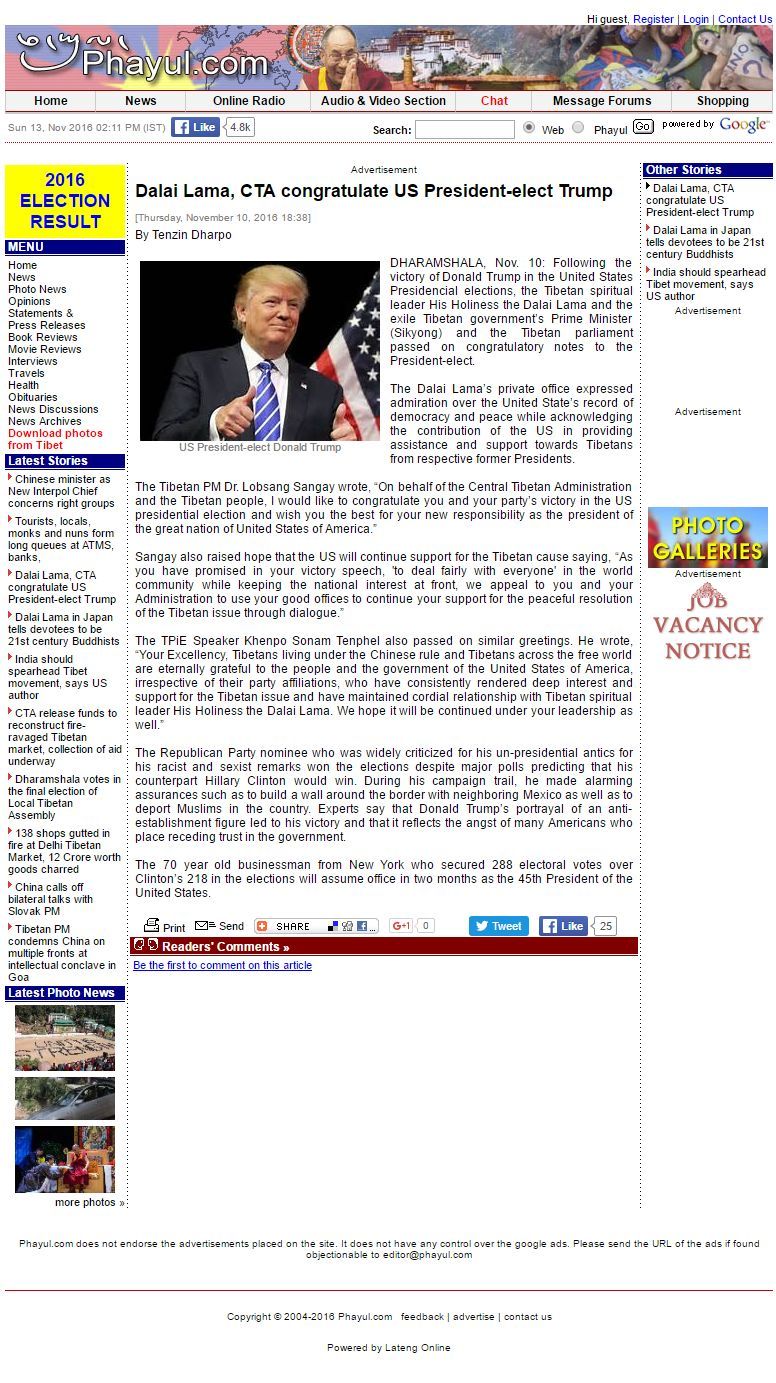 Tibetan leadership reminding Trump to continue America’s support to Tibet in their congratulatory message. Click on image to enlarge.

Half a century after the Tibetans went into exile, the CTA is still not self-sufficient but continues to receive aid generously bestowed on them by various governments and individuals. For example in 2014, US$19 million was spent by the United States government on various projects related to the Tibetan people, while at least US$6 million was allocated for Tibetan use in 2016. In Congressman Dana Rohrabacher’s letter dated 1 February 2016, he stated that the United States government also grants the CTA its assistance to alleviate poverty within the Tibetan refugee populace and for the promotion of democratic ideals and governance9. These sums do not even take into account the vast private donations that the CTA and their associated bodies receive from wealthy, private donors. Yet the Tibetans refugees are still nowhere close to their goal and the majority of Tibetan people continue to languish in the exile settlements with a bleak future facing them. After 50 years of global support and aid to the CTA, the Tibetan leadership in exile still has to depend on handouts and this shows their incapability to manage their own affairs and chart a future for themselves. And yet, the same group of corrupt politicians claims to be able to manage 6 million Tibetans and engage in complex statecraft with powerful neighbors and enter sophisticated trade agreements with the world.

As the Dalai Lama continues to create public relations disasters, the CTA’s gravy train may be coming to an end. As the Tibetans in exile hope that The Tibetan Policy Act of 2002 (TPA)10, a core legislative measure guiding United States policy toward Tibet, will continue to provide support to alleviate their woes, the new US President may have other ideas. In an interview with New York Times in July, President-elect Donald Trump said that he prefers to focus on the problems in his own country and that it is hard to get involved in other countries when Americans “can’t see straight in our own country”.11 During yet another occasion, Trump referred to the Chinese government’s crackdown of the Tiananmen Square protest as the Chinese authorities demonstrating the power of a government in putting down a “riot” with strength. Loosely translated, it means the CTA is becoming irrelevant and less important and that the Tibetan leadership may need to look elsewhere for friends but there are no more friends who wish to ignore and oppose China. America was the CTA’s closest ally but that was before the Tibetan leadership made fun of America’s new boss. 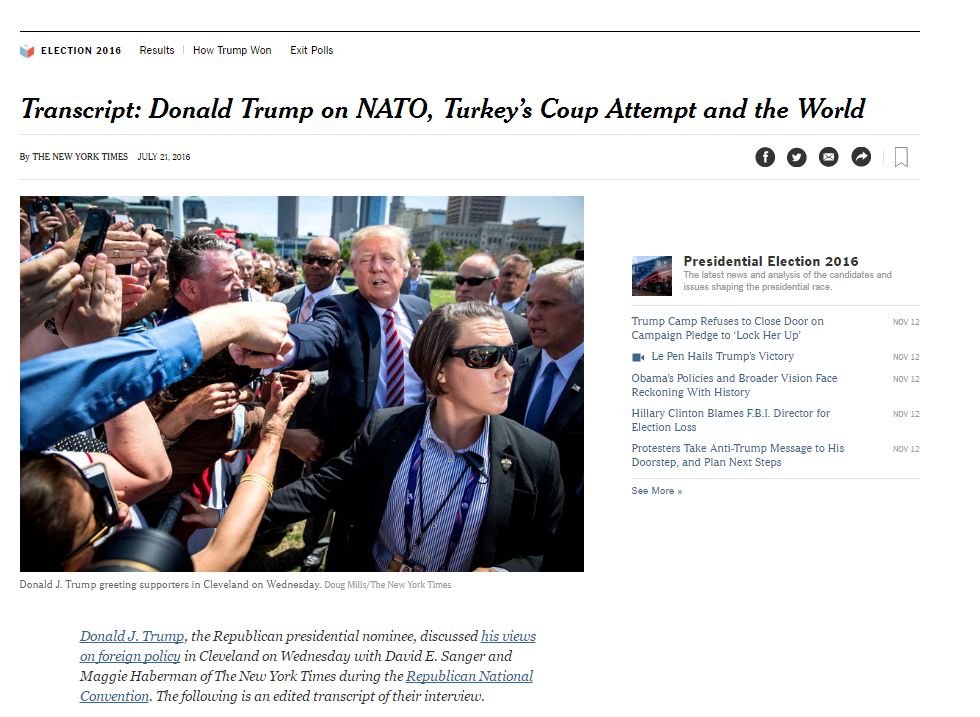 Trump wants to focus on fixing ‘our own mess’. Click on image to enlarge.

Trump wants to focus on fixing ‘our own mess’. Click on image to enlarge.

It’s Bad to Be Seen With Tibetan Leaders