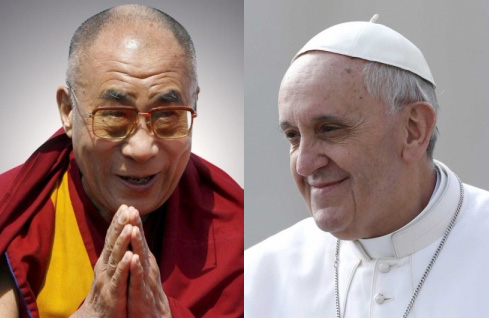 Top image caption: It has emerged that Pope Francis has snubbed the offer of a meeting with His Holiness the Dalai Lama

The popularity of the Dalai Lama among world leaders is dropping. People would like to say immediately that everyone is afraid of China. Perhaps they should rephrase by saying many nations respect the sentiments of China. The Dalai Lama would do much better if he would extend his efforts to making friends with the Chinese leaders. No leader from another country can influence or force China to do what she doesn’t want to do. By the Dalai Lama meeting foreign leaders and always talking about China taking over Tibet will not help the situation.

The Dalai Lama says he has relinquished political control, but his actions do not show this. Be it so, but the fact remains Tibet is a part of China and will remain so. For the Tibetans inside of China to have a better life, it would make sense for the Dalai Lama to be friends with Beijing. It’s been over 50 years since the Dalai Lama has left Tibet and fighting for Tibetan independence now watered down to autonomy has failed miserably. None of his plans or strategies worked to a free or independent Tibet. It’s time to sit back and take stock of the failure and do not blame the issue on anyone including Dorje Shugden. Tibet is still part of China. The Dalai Lama is already 79 years old and how many years does he think he has left? 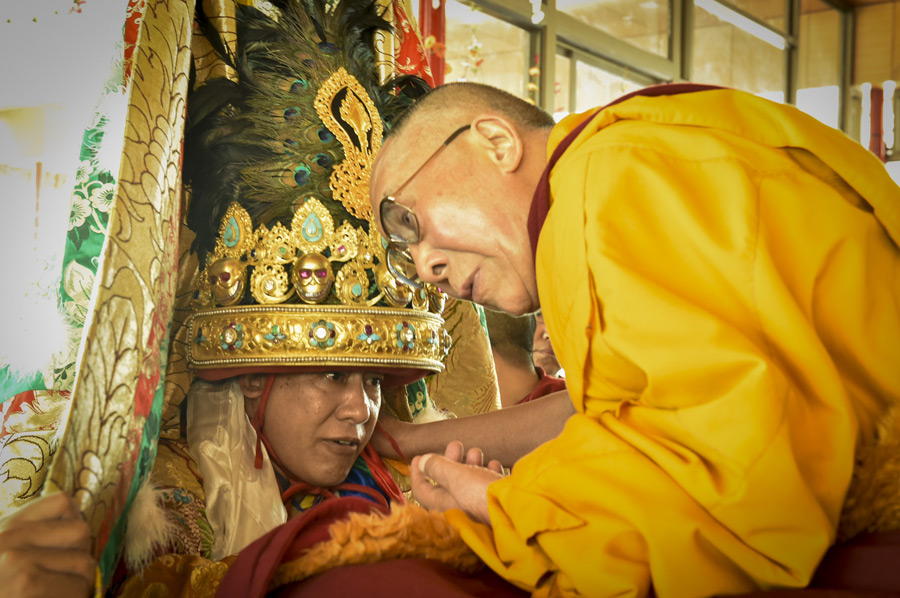 The Dalai Lama is consulting the spirit Nechung who has entered a monk medium and giving advice. The Dalai Lama will regularly rely on the advice of this spirit.

For a time the Dalai Lama and the CTA said the worship of Shugden is detrimental to the Tibetan movement for independence. That this deity ‘blocked’ Tibet’s independence. Everyone should give up this deity and from this the ban and segregation against Shugden followers began till now creating untold suffering to millions. The Dalai Lama said Nechung also backed this up. Nechung is a protective deity of Tibet who takes trance of a monk medium and speaks from a trance like state. The Dalai Lama often seeks this medium’s advice.

Many of the Dalai Lama’s important decisions are consulted to Nechung. Many Tibetans have criticized heavily the Dalai Lama’s reliance on Nechung and banning Shugden, but much work is done to silence the opposition. The Dalai Lama and his exiled ministers (CTA) do their utmost to silence any opposition on any subject both political and spiritual. There is a façade of democracy under the Dalai Lama but it is far from it. People live in fear to oppose. 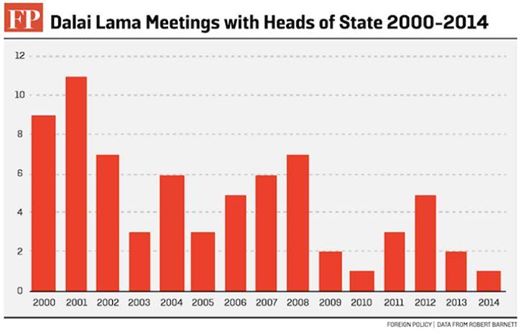 It would be a good move for the Dalai Lama to stop meeting all the leaders of various countries and focus on making China happy. China is in charge, has the power and economically everyone wants a relationship with China. Who would pick the Dalai Lama over China in today’s economic race to prosper? Even if they pick the Dalai Lama, what will they gain in return? No economic benefits whatsoever. In fact people have to donate and sustain the Dalai Lama and his CTA regime in Dharamsala. The Dalai Lama and his cronies live on handouts due to the kindness of many individuals and governments around the world.

The Dalai Lama should not be divisive which China has accused him of being. Whether he is or not is not the point, but it appears that way to China. China must be placated as the aging Dalai Lama does not have many years left. As Tibetans prophesize this is the last Dalai Lama. Time to make China happy before it’s too late.

Pope Francis snubs the Dalai Lama at Nobel Peace Prize event
Pontiff, who has sought to build relations with other faiths, will not meet the spiritual leader of the Tibetan people amid fears of displeasing Beijing
By Nick Squires, Rome | 5:40PM GMT 11 Dec 2014

They are two of the most admired religious leaders in the world but Pope Francis has chosen not to meet the Dalai Lama in Rome this weekend when the Tibetan exile attends a summit of Nobel Peace Prize winners.

The decision reflects an acute diplomatic dilemma for the Pope, at a time when the Vatican is attempting to improve its relations with Beijing and wants to avoid upsetting the Chinese authorities for fear of provoking trouble for the country’s Catholic community.

The snub is hardly in keeping with the Argentinean pontiff’s enthusiasm for dialogue with other religions, an agenda he has pursued in recent months on trips to Turkey, Albania and the Holy Land.

He will pick up the theme next month when he travels to Sri Lanka, where he will meet the island’s Buddhist leaders.

“This time I won’t meet Pope Francis,” the Dalai Lama on Wednesday after arriving in Rome, adding that he would have been “very happy” to do so.

“The Vatican administration says it’s not possible because it could cause inconveniences.”

The Vatican confirmed that the two men, whose shared concern for the poor and the down-trodden give them much common ground, would not meet.

“Pope Francis obviously holds the Dalai Lama in very high regard but he will not be meeting any of the Nobel laureates,” a spokesman said.

Instead the South American pontiff will send a video message to the conference of Nobel Peace Prize winners.

The event was originally due to be held in South Africa but had to be moved after the Pretoria government refused to issue the Tibetan spiritual leader a visa, fearing repercussions from Beijing.

Under Pope Francis, the Holy See is trying to improve its previously fraught relations with China.

When he visited South Korea in August, he became the first pontiff ever to be allowed to fly through Chinese air space.

In a radio message he sent his “best wishes” to Xi Jinping, the Chinese president – it is customary for the Pope to send greetings to every country that he flies over when travelling abroad.

His greeting, however, came during one of the most intense campaigns of repression for Chinese Christians, with authorities destroying churches or removing their crosses.

The Dalai Lama is often snubbed by leaders anxious not to offend Beijing. The last time he was granted a papal audience was with Benedict XVI in 2006.

There are an estimated 12 million practising Catholics in China.

Half of them belong to a state-sanctioned Church while the other half attends clandestine churches which swear allegiance to the Vatican.