Patna: A section of Indian Buddhist monks has demanded that Tibetan leader Dalai Lama be deported from this country.

The monks associated with the Mahabodhi temple in Bihar demanded that President APJ Abdul Kalam order the deportation of both the Dalai Lama and the 17th Karmapa, Ugyen Trinley Dorji, who heads a sect of Tibetan Buddhists. All India Monks Association general secretary Bhadant Anand, in a memorandum to the president, alleged that the Dalai Lama, through his “questionable” acts and “pretensions”, had caused avoidable tension between India and China.

The Tibetan leader’s deportation, he argued, could improve Sino-Indian relations.

India gave the Dalai Lama political asylum in 1959 after the Chinese entered Tibet. He has since been based in the Himalayan town of Dharamsala in Himachal Pradesh and runs the Tibetan government-in-exile from there. Anand, who is based in Buddhism’s birthplace Bodh Gaya, told IANS on the telephone:

The Dalai Lama’s stay is against the interest of India as he is involved in activities harming the country. The Dalai Lama is causing harm to the Buddhists as well as Tibetans and Indians.

This is not the first time Anand has targeted the Dalai Lama and Karmapa. A few months ago he alleged that the Dalai Lama was involved in “anti-India activities” and was harming this country’s image. Monks led by Anand had staged a daylong demonstration Sunday in Gaya demanding the immediate deportation of the Dalai Lama and the Karmapa.

Their memorandum alleged the Karmapa and his mentor, the Dalai Lama, were misusing India’s hospitality.

Anand claimed that two years ago the Karmapa had hurt the sentiments of millions of Buddhists across the world by entering the Mahabodhi temple — which stands near the spot where the Buddha attained enlightenment 2,500 years ago — with his shoes on. He called it an attack on Indian culture and a deliberate act to humiliate Indians. Indians generally do not wear shoes in places of worship.

Anand said when Taliban were destroying massive stone images of the Buddha in Afghanistan’s Bamiyan region, neither the Dalai Lama nor the Karmapa had protested despite the fact that the international community had in one voice appealed to the militia not to damage the statues. 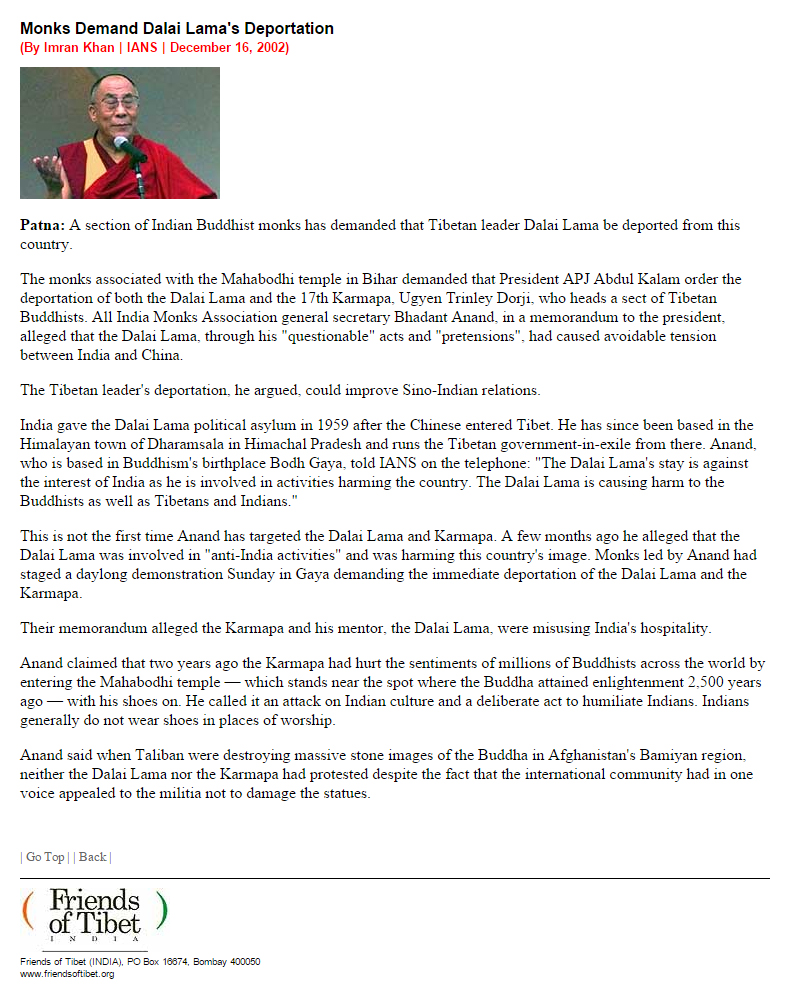