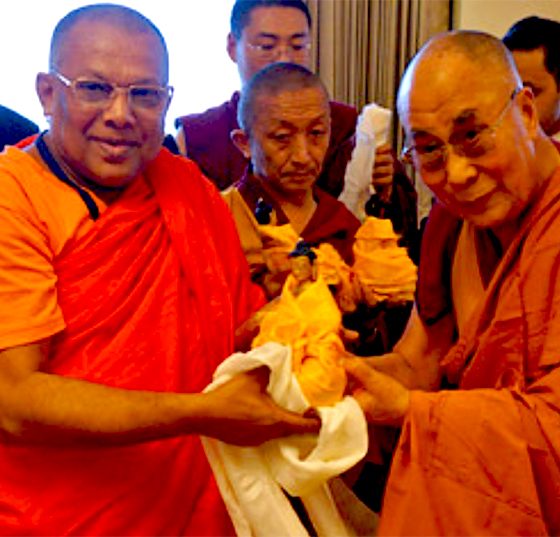 Top image caption: His Holiness the Dalai Lama presenting the delegation of senior Sri Lankan monks with a Buddha statue after their meeting in New Delhi, India on March 19, 2015

In the Tibetan effort to regain their independence from China, the exiled and stateless Tibetan “government” (the Central Tibetan Administration or CTA) had, since the beginning, depended on a single factor, the Dalai Lama’s popularity. It is upon this dynamic that the CTA developed a series of friendships with the free nations of the world and depended on foreign friends to exert sufficient force on the Chinese government to win the Tibetans their freedom. While this strategy gained the Tibetan people considerable airtime on the international stage over their struggle, it failed in its main objective.

Over the decades, the currency of the Dalai Lama’s celebrity status waned against the fast-rising economic influence of China, and the CTA’s strategy began to lose traction. One by one, traditional friends began to distance themselves from the Dalai Lama whom Beijing regard as a ‘separatist’. Recently, even old friends like Sri Lanka acknowledged that a good relationship with China is the paramount consideration and they cannot risk provoking the ire of the rising Asian giant.

In light of this, the CTA must now realize that it cannot any longer depend on foreign allies as ballast against China’s rising power and should cease all divisive activities and seek peaceful dialogue with Beijing. But first, the CTA has to reunite its people that it has carelessly divided over many issues (including the ban on Dorje Shugden’s practice) and present themselves to China as one strong voice. 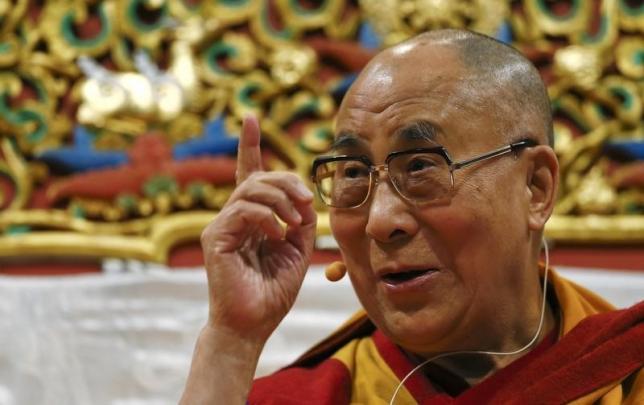 The Dalai Lama gestures during a public talk and teaching event at St. Jakobshalle, in Basel February 7, 2015. REUTERS/ARND WIEGMANN

(Reuters) – Sri Lankan Buddhist monks have invited exiled Tibetan spiritual leader the Dalai Lama to make his first visit to the island, after a strongly pro-China government was voted out in January, but an official said Colombo was unlikely to allow it.

Sri Lanka’s new President Maithripala Sirisena has loosened ties with Beijing and moved closer to India, which has hosted the Dalai Lama since he fled Tibet in 1959.

But the majority Buddhist island, which is home to some of the religion’s most sacred sites, still depends on China for major development investment and loans.

“They can invite, but the government may not grant a visa,” a top foreign minister official told Reuters, asking not to be named because of the sensitivity of the subject.

The Dalai Lama is very important. But the close relationship with China is more important and we have not changed our stance on ‘One China’ policy.

As China has grown more economically powerful it has used its influence to dissuade world leaders from meeting the Dalai Lama, whom it denounces as a dangerous separatist, but only a handful of countries outright prohibit him from visiting.

China offered Sri Lanka over $1 billion in grants during a four-day official visit to Beijing by Sirisena last week, underscoring how lucrative the relationship remains for the island that is rebuilding after a long civil war.

The invitation to the Dalai Lama was extended by a group of high-ranking Theravada monks from Sri Lanka’s Mahabodhi Society when they attended a theological discussion in late March with Indian monks in New Delhi, senior monk Banagala Upatissa said.

Upatissa said the Dalai Lama told him he had wanted since childhood to visit a Sri Lankan temple housing a relic of Buddha’s tooth, and Mahabodhi, which contains a descendant of the tree under which Buddhists believe he attained enlightenment.

“He told us that all others in the world – Christians, Hindus and Muslims – treat him well. But his own Buddhist brotherhood does not treat him well,” Upatissa told Reuters.

“We felt saddened and disturbed and invited him to visit Sri Lanka. I hope to discuss with the government to find a solution for this. Without antagonizing China, we are trying to get him a visa as an ordinary monk and not as a state official.”

The Dalai Lama would be happy to visit but does not want to cause any inconvenience to the Sri Lankan government, Chimme Rinzin Choekyapa, one of his senior aides, told Reuters.

The meeting in New Delhi came shortly after Indian Prime Minister Narendra Modi visited a Buddhist site in Sri Lanka, where he was hosted by Upatissa.

India, where Buddhism was founded, and China, with the world’s largest Buddhist population, both portray themselves as protectors of the religion.

Upatissa rejected suggestions in Sri Lankan and Indian media that the invitation was mooted by India as a move to signal a new independence from Chinese influence.

“We will be very happy if we can fulfil the Dalai Lama’s desire,” he said. “He is a Buddhist brother of ours who follows the teachings of the same Lord Buddha.”

Why doesn’t the CTA help Nepal?